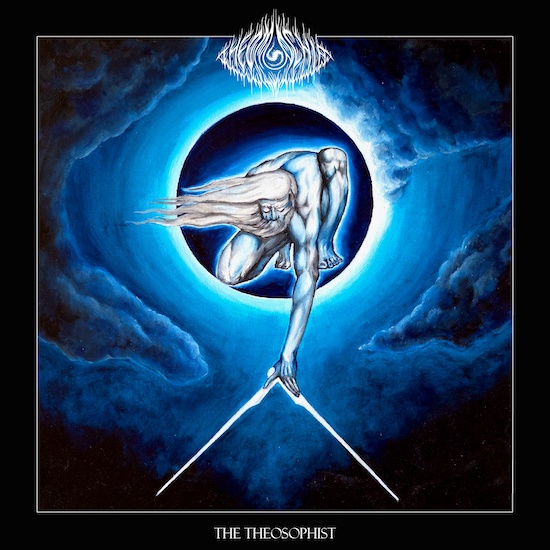 We are pleased to introduce you to an unusual black metal project from Rome. Born from the mind of instrumentalist/vocalist F.M., who is joined in the project by lyricist and visual artist I.G.Tataru, Theomachia crafts an idiosyncratic and mercurial style of music defined as “gnostic black metal”. As revealed through a debut EP named The Theosophist, it draws inspiration from such prominent Norwegian bands as Emperor and Ulver (as well as Sisters of Mercy), but undeniably marches to the beat of its own mad and mysterious drummer.

In its lyrical themes, The Theosophist poetically visits vast and daunting questions, building upon elements of Greek philosophy that range from Socrates to Neoplatonism. In its sounds, which change constantly within each of the EP’s three songs, it is both ceremonial and violent, haunting and harrowing, dismal and dazzling. It juxtaposes sharp and riveting contrasts, in the vocals as well as the instrumentation and melodies. The music is head-spinning and unsettling, and exerts a strange but strong grip on a listener’s attention.

On February 4th The Theosophist will be released on cassette tape by Xenoglossy Productions and on CD by Onism Productions, but you can explore it in full today through our premiere. 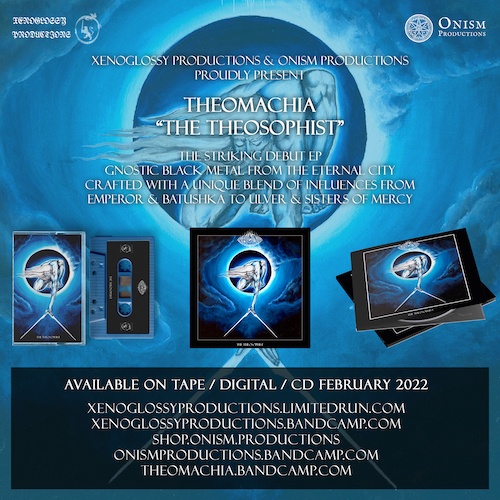 Brief ethereal keyboard tones and strummed chords open the first song, “Gnothi Seauton“, but they are soon subsumed in haunting proclamations, dismal seething tones, and pounding percussion. The riffing begins to move in boiling waves as the vocals turn to serrated-edge snarls. Cascades of mysterious and majestic symphonic grandeur also rise and fall above the roiling tumult. The vocals continue to trade places across melodies that seem to translate mystery and misery. When the pacing steadies, the music swarms like pestilence in gloom.

The next song, “The Suicide of the Demiurge“, immediately boils with despair, but quickly softens into ringing sounds and somber spoken words. The rhythmic beats begin to move the listener’s head, but the guitars blanket them in an abysmal shroud. Feelings of tension and turmoil flow through the seas of abrasion and bell-like tolling. In the closing movement, the riffing becomes feverish and then tragically, mystically grand.

In the EP’s closing title track, the guitar buzzes like a frenetic hornets’ nest, segmented by grandiose drum detonations and half-sung words. The drums begin to race, and the vocals grow more fervent as the riffing maniacally skitters, torquing the tension of the music. Suddenly, eerie keys and disturbed strumming prevail, but just as suddenly the music seems to become a giant excavator of earth, quarrying the mind. As before, the vocals continue to trade places, growling and singing — until they vanish in a wash of disturbing ambient vibrations.

This is a very promising debut, and leaves us hoping for more to come from the Theomachia duo.

F.M. performed guitars, bass, and vocals on The Theosophist, joined by guest drummer Valerio Primo (Thecodontion, SVNTH, Verano’s Dogs). The EP was mixed and mastered by Jacopo Gianmaria Pepe (Bedsore, SVNTH, Night Gaunt, Atlantic Ridge). The band logo and striking cover art were created by I.G. Tataru, who adapted his cover art from “The Ancient of Days” by William Blake.