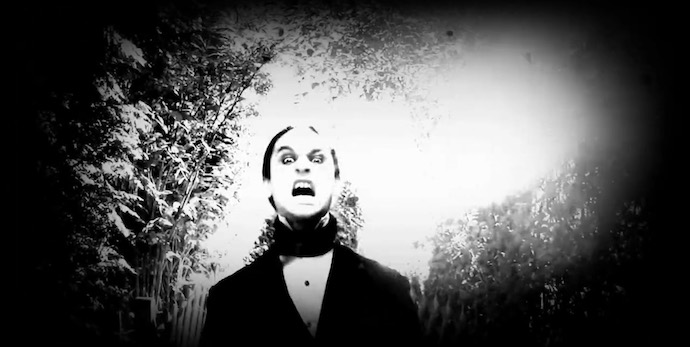 Today we return to the spine-tingling musical world of Les Chants du Hasard, a world of imagination and extreme emotion that is simultaneously enthralling and frightening, seemingly connected to milieu of centuries past but may never have existed at all except in dreams — submersive and astonishing dreams that are both seductive and shuddering, haunting and breathtaking, daunting and fierce, and much more.

This solo project of Hazard has so far produced three albums that combine neoclassical bombast, gothic opera, and a blackened metal spirit, presented with lyrics that are astonishingly absorbing. The first two, Livre Premier (2017) and Livre Second (2019), were released by the distinctive I, Voidhanger Productions. The third, Livre Troisième, was self-released in the spring of last year.

From among the eight movements on that most recent album Les Chants du Hasard chose the fifth one — “Les Milliers D’une Fois” — to become the subject of a music video that we’re privileged to premiere today. 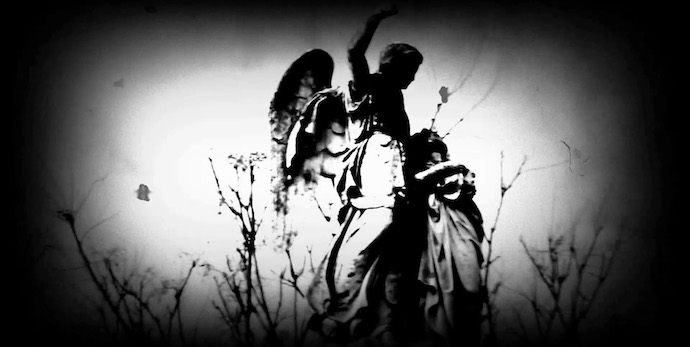 We begin by sharing the comments of Hazard about the track and the video:

‘Les Milliers D’une Fois‘ has been this album’s pivotal song during the composition process. This was not the first one composed, but it defined the mood and sound I wanted to have. It is probably the most important song of this album.

David Brenner [Gridfailure] directed the video and did an amazing job there. The pictures perfectly convey the strangeness and old world feel of the song with the aesthetics of a silent movie. 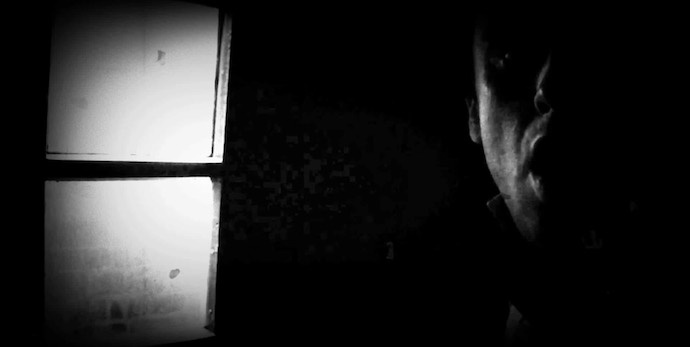 The video uses clips filmed by Hazard in France, with additional footage filmed in New York by Brenner. Its frantic scenes, which do indeed seem lifted from the era of silent movies, draw out the most otherworldly and unnerving aspects of the music.

In contrast to the video’s flashing imagery, the music swirls slowly like a deeply melancholy waltz, joined by a celestial choir and by a baritone voice singing in solemn and sorrowing tones. The soaring strings, horns, and organ notes might make you think the dance is one among wraiths, elevating into the air beneath the vault of an abandoned gothic hall, or through a field of tombstones that don’t interrupt their course.

Seamlessly, the mood of the music intensifies. Tension builds. A feeling of sinister peril mounts. The operatic singing, searing instrumentation, and low-frequency booms create an atmosphere of immense tragedy and feverish anguish. The music swells to a shattering crescendo. When the waltz resumes, it’s still encompassed by feelings of dread and downfall, and the vocals soar again, like a performance at a classically orchestrated funeral mass.

With the music and the bulk of the vocals handled by Hazard, Livre Troisième features additional vocals from Marfa Khovansky, Melitza Torres, Vaerohn (Pensées Nocturnes), and Göran Setitus (Svartghast, ex-Setherial). The album was mixed and mastered by Olivier Prouvost, professor at the music conservatory of Paris, who advised Hazard on the orchestration and composition of the record.

Livre Troisième is available on CD (deluxe 6-panel digipak) and digitally. To acquire it, and to explore the band’s other releases, visit the Les Chants du Hasard Bandcamp page. We’ve also included the entire album stream below in two players.

Watch for further upcoming developments from Hazard in the months ahead, including new works from Les Chants du Hasard among other projects.