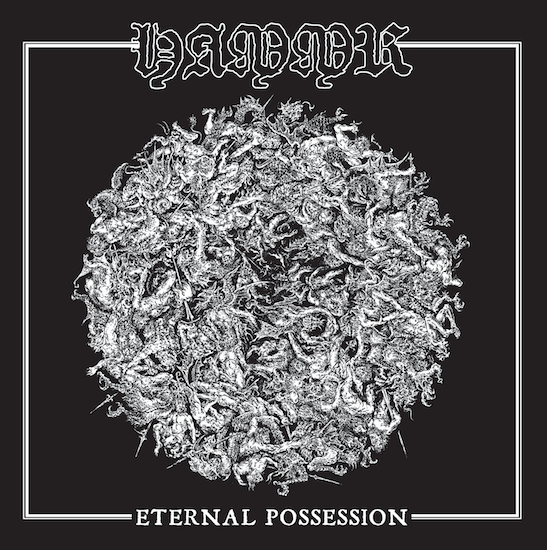 I still have burn marks, slash scars, and giddy memories from Hammr‘s first album Unholy Destruction. That was four years ago, long enough to heal the wounds but not long enough to quell the feelings of dizziness and thrill-filled mayhem that come back in thinking about that blast of proto-black metal, hardcore punk, and evil speed metal. And so I got a surge of adrenaline from just thinking about the advent of a new Hammr album, and an even bigger surge in listening to it — which you’ll get a chance to do right now.

Eternal Possession is the name of the new one, and it’s a valid title, foreshadowing both the experience of being overtaken and overwhelmed by it as a listener and the conviction that the person who made it was himself under the throes of diabolical possession, with a take-no-prisoners, give-no-fucks, spirit that shows no signs of surrender, now or ever. 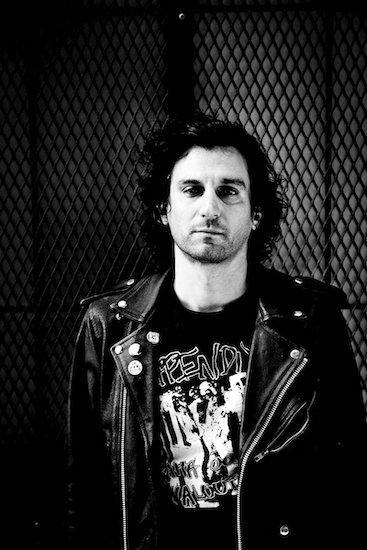 J. Hammr originally drew inspiration from early Bathory, Celtic Frost, Iron Angel, Discharge, early Slayer, Sodom, and Venom, brandishing the musical results under the self-proclaimed banner of “Satanic speed”. For that first album, he was aided by the wild soloing of Midnight’s Commander Vanik, who also mixed the album, and by the mastering work of Toxic Holocaust‘s Joel Grind. For the new one JH goes it alone, but the results are no less nasty, exhilarating, or contagious.

Simply trying to write about this music could subject someone to the accusation of over-thinking things. Eternal Possession really isn’t the kind of experience that engages the rational part of your mind as you listen to it. It rudely kicks that part of your mentation out the door and sprawling into the street and then takes what’s left (the animal part that reacts by instinct and reflex) on a wild and viscerally compelling ride that permits no pause for reflection. (There’s a reason why sex, drugs, and alcohol get invoked in reference to certain kinds of rock and metal — because those are other ways of silencing the ability to think.)

If you’re familiar with Unholy Destruction, you’ll notice that the sound of Eternal Possession is rougher and ruder. Even though the previous album wasn’t exactly spit-shined, the riffing in the new one is more corroded and abrasive in its tone, all the better to draw blood and transmit disease as it slashes, roils, and blares. The screaming soloing, which is still berserk, sears like an acetylene torch, but it’s not clean either.

There’s no pause in the album’s accelerated momentum. The drums and bass (which you can feel in your spleen) are in open-throttle mode almost all the way, discharging punk rhythms and thuggish hammer blows at manic speed, augmented by crashing cymbals that also scar the senses. On those rare and brief occasions when the rampant pacing slows, it’s to pave the way for soloing of a more frighteningly supernatural variety or brazen fanfares of imperious arrogance. And like every other ingredient in the music, JH‘s screaming vocals are unchained — utterly rabid, insanely vicious, and ruinous to the larynx.

The album is just a 30-minute run, furious from beginning to end. That’s just right, long enough to give you a welcome blast of adrenaline and filthy ecstasy, but not so long as to wear out that welcome. And did I mention that it’s as infectious as a hybrid of omicron and ebola?

With that, we turn you over to our premiere stream of Eternal Possession in advance of its February 11 release by Hells Headbangers:

What will become available on February 11 are CD and tape editions of the album, but a vinyl version is planned for later this year.

No Responses to “AN NCS ALBUM PREMIERE (AND A REVIEW): HAMMR — “ETERNAL POSSESSION””