The Greek black metal coven Acherontas has long been known for the vital connection between their occult spirituality and their music: Each fuels and guides the other. There is no reason to think that has changed (to the contrary, it hasn’t), but with their new album The Seven Tongues of ΔΑΗΜΩΝ the band have announced their entry into a new phase of existence, a final reincarnation and a new era of continuity that is in part signified by a new expression of their name: ΑΧΕΡΟΝΤΑΣ.

As captured in the album’s name, it consists of seven ritualistic hymns, expressed as offerings upon the altars of Seven Gods — a “Mission of Seven Hells and Seven Destinations” — still rooted in ancient esoteric sources. In the progression of the album, the third offering invokes the name of Belial — “Belial-The Enn of Beliya’al” — and we present it to you today through a diabolical lyric video.

Moving at the cadence of a stately procession, the song opens with chords that are grim and grand, but within that ominous march the fervent reverberating tones of the lead guitar flicker like a glorious flame. In the song’s opening movement those unmistakable feelings of reverence and fervor also come through in an extravagant cornucopia of vocals, which snarl and wail in a seeming union of ferocity and madness.

The pace and turbulence of the music increases, the drums building toward a blasting fusillade, the guitars burning brighter and then boiling in the fires of vicious derangement as the voices utter solemn proclamations and scream in violent ecstasy. As the song progresses, it also jolts and rumbles, seems to squirm like maggots, and rises in sinister and unnerving grandeur as it makes its supplication to ancient princes of evil.

About the album as a whole, we share these words from the band’s founder V.P.Sorcerer:

The new Opus, bearing the fiery symbolic crown of The Seven Tongues of ΔΑΗΜΩΝ, unto the realms of matter. The sands of creation shall shift once again, as the new album of the Coven signifies the sail towards new horizons, fertilizing the grounds with blessed sonic resources to bear fruits on spiritual levels. Seven pacts with powers unknown to mortal men, yet to be known to the elevated individual that chooses to follow the thread beyond mortality. Seven pathways to the Inner Sanctum, grasping a harsh lesson, a taunt of spirit and soul, benign and glorifying.

The Coven places this newborn Opus upon the altars of the Seven Gods, paying tribute to the forces of the Other that have inspired its course over the decades. The listener is set to be reached by this reverence, since this reverence is set to extend within the listener and let him become one with the multidimensional becoming that is assigned, this Mission of Seven Hells and Seven Destinations. This is a new era of continuity, forging all the bestial aspects of the Past to a shining athame that shapes the Future. 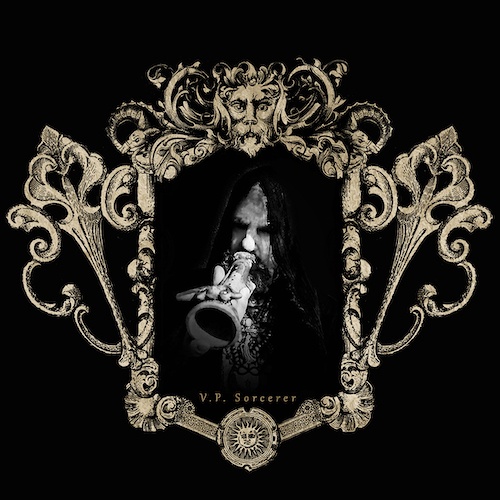 The cover art for The Seven Tongues of ΔΑΗΜΩΝ is from a painting by Maximilian Pirner (1854-1929). The album will be released on March 14th by Zazen Sounds. For more info about the release and how to obtain it, keep an eye on the following locations — and then be sure to listen to the previously released track “Hecate-Queen of the Crossroads“, which comes sixth in the running order.