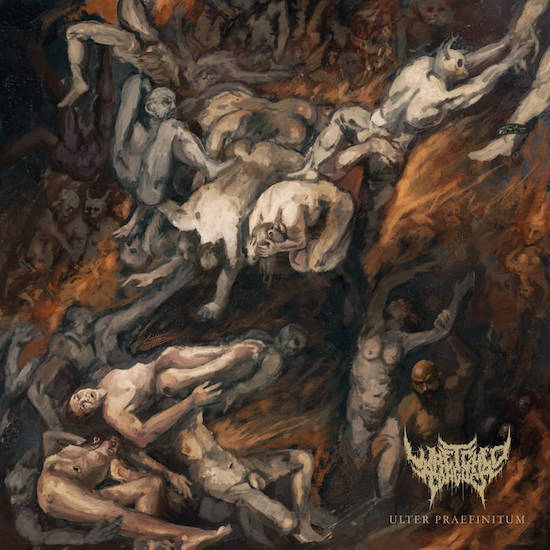 Gaze upon Caelan Stokkermans‘ cover art for the debut album by Wretched Tongues and contemplate the agony of those naked figures in the clutches of their fiendish tormentors. It captures some of the visions spawned by the music, but not all. To do that, the imagery would need to include the discharge of massed machine-guns, the detonation of bunker-busting bombs, the madness of frantic, blood-lusting violence, and the wailing of lost souls.

You’ll understand this when you listen to “Mortality“, the latest single by these U.S. deathcore heavyweights from their album Ulter Praefinitum, and that’s an opportunity we bring you today through our premiere of the song in advance of the March 18 album release by Vicious Instinct Records. 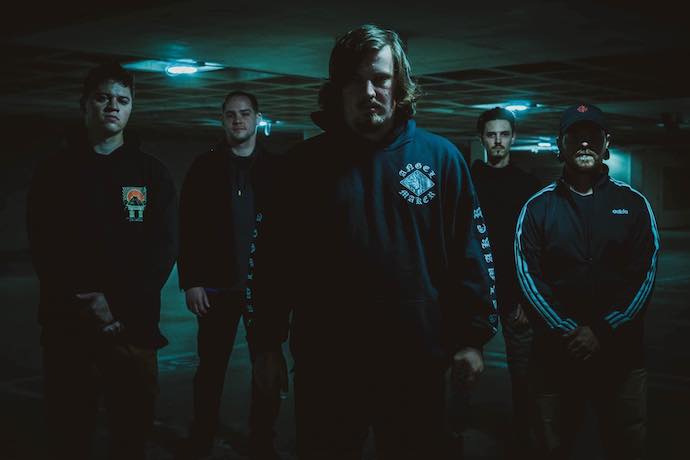 “Mortality” starts with our main character awakening from a strange vision, finding that he has been physically moved from where he had fallen unconscious. Unsure if this was a dream, or a memory of his own or of another life, he tries to make sense of things while his surroundings shift and their inner workings are revealed to him. What can it all mean in the end? What is this place of death? “Mortality” is a sonic assault from start to finish. It fully embodies the panic and stress of this part of our journey through The Nothing and the overwhelming sense of dread throughout.“

Yes indeed, “Mortality” is a sonic assault from start to finish — that is no exaggeration. The drumming spits bullets at maniacal speed; the riffing roils and writhes at equally high velocity and inflicts jackhammering, bone-smashing punishment. Gruesome growls and berserk screams eject the words in a tandem of unhinged ferocity. Brief rhythmic starts and stops jolt the senses, and brazen chords go off like blasts of flame.

The maddened turbulence of the music is virtually non-stop, but the band do slow the mayhem to make room for the chilling glide of eerie, unearthly melody, bursts of screaming guitar torture, and controlled percussive explosions that seem capable of leaving skyscrapers in a smoking ruin.

The rampant destructiveness and insanity channeled by the music is electrifying, and marks “Mortality” as one of the new album’s most intense attacks:

Through the Bandcamp player below you can also check out the two previously released singles, “Into the Nothing” and “Call of the Chasm“. And we’ve got links for pre-order of Ulter Praefinitum in different formats, as well as apparel that features that stunning cover art at the top of this page.