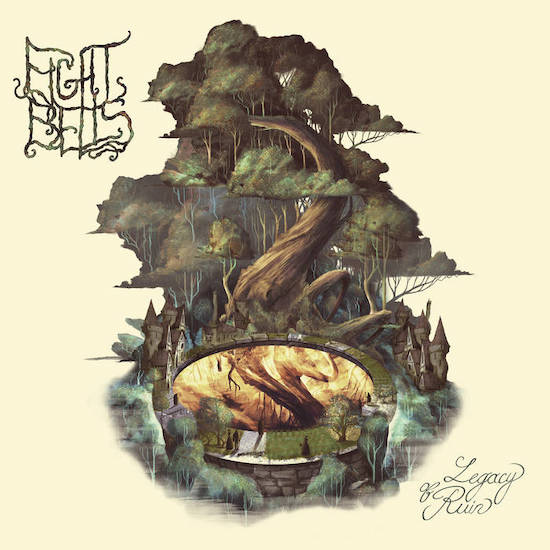 (Our friend Justin Collins  is the author of the following review of the latest album by the Oregonian band Eight Bells, which is scheduled for release on February 25th by Prophecy Productions.)

It’s been a little while since we’ve been graced with an Eight Bells release. As is probably the case with many people, I’ve lost all sense of time because of the pandemic, but it’s been 6 years since they released Landless. Granted, life sometimes gets in the way. Injuries, lineup changes, and the need to make a living get in the way of artists who make music off the beaten path, but luckily Melynda Jackson, the constant of this group, has soldiered on to create Legacy of Ruin with two new band members, Matt Solis (Cormorant) on bass and vocals, and Brian Burke (Cave Dweller) on drums. 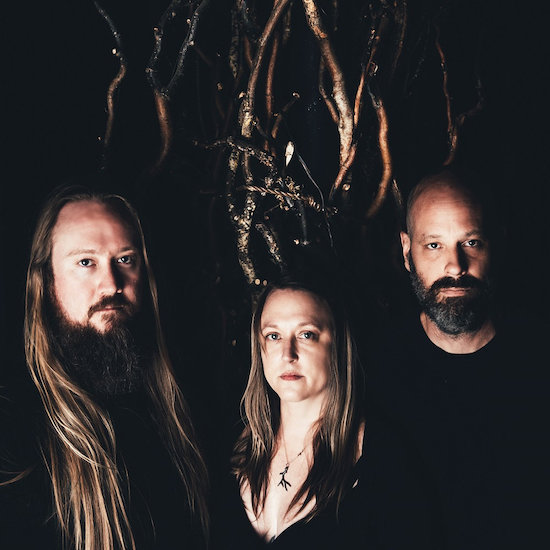 Gun to my head, I’d label Eight Bells as “interesting doom.” That might sound like damning with faint praise, but I mean it as a sincere compliment. I’ve seen a lot of genre labels attached to this band, but none of them are quite right, and listing them out risks alienating anyone who isn’t already familiar with the project. The music on Legacy of Ruin is intricate but not fussy, heavy but not monochromatic, and above all emotionally compelling. Clean and chant-like is the dominant vocal style, but not to the exclusion of some heart-rending growls and howls. Simple, chime-like guitar riffs, like at the beginning of “The Well,” serve as tasteful backdrop to the harmonized vocals. The swells and the distortion come, after a time, but it’s a slow build.

I think one of the most impressive things about this album is that, in spite of the slow builds and the deliberate ebb and flow of the music, the songs retain their unique identities. “The Well” is an 11-minute epic, but it’s not three or four songs mashed together. Themes are stated, go quiet, and resurface later on. Each song has a unique–and coherent–sonic identity, which you can’t say for just any album that comes out with a “prog metal” label slapped on it.

“Nadir” brings the heavy and a strong propulsive energy, which is an interesting choice for a song with that title. Maybe it’s meant to represent pushing through the lowest of the lows, which would be apt for this particular band. The beginning of the “The Crone,” and its vocal harmonies in particular, puts me in mind of a darker version of “California Dreamin’.” In fact, I was initially put off by this song a little, not because of a dislike of The Mamas and the Papas, but because I couldn’t quite put my finger on what it was reminding me of. (Hopefully none of the band members will be inclined to punch me over that comparison. There are certainly worse singers than Cass Elliott to be compared to. The staccato howls later in the song tend to dispel that dream-like quality, anyway.)

The closing track, “Premonition,” might be the masterpiece of this particular album. The start is heavy, segueing into a jangly riff. Rapid-fire drums underlay a driving bass line, tremolo guitar, and a pairing of clean singing and bellows. The halfway mark of the track comes in low and slow to funeral doom territory, and the emotional tension just builds and builds. It’s painful to listen to this much sadness being channeled, but painful in a good way, the way you might welcome negative emotions after spending time feeling nothing at all. It’s almost too much to bear, but much like this band and this album, I didn’t want it to end.

One Response to “EIGHT BELLS: “LEGACY OF RUIN””