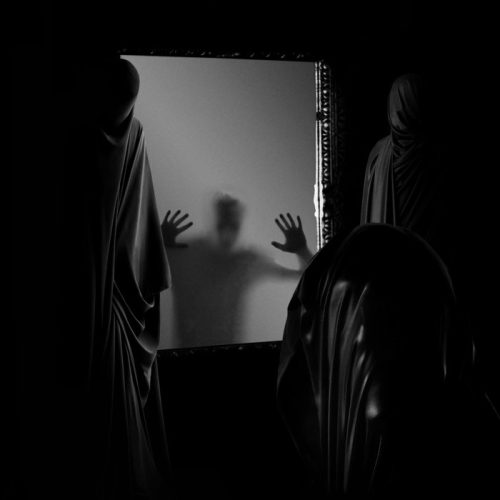 (Andy Synn delves into the darkness of The Ailing Facade, the upcoming new album by Aeviterne)

Gather round my friends and let me tell you the tale of… Flourishing.

With just a single album to their name, released all the way back in 2011 (the same year, as it happens, that Ulcerate released The Destroyers of All, which perhaps explains why The Sum of All Fossils ended up being somewhat overlooked/overshadowed in the grand scheme of things), the group may not be the most well-known of names, but in certain circles their legacy as a band well ahead of their time – progenitors, in many ways, of the still evolving Atmospheric/Dissonant Death Metal movement – is absolutely unquestionable.

But even if you’re not familiar with the band at all, you should still be excited by the upcoming release of the debut album from Aeviterne, as the group’s line-up not only features two ex-Flourishing members (vocalist/guitarist Garrett Bussanick and bassist Eric Rizk) but also involves creative contributions from ultra-talented ex-Castevet drummer Ian Jacyszyn and Artificial Brain‘s Sam Smith, which should give you some hint of the dark and demanding sound the quartet have conjured on The Ailing Facade.

Even taking these impressive credential into account though, the release of this album still raises the question – particularly in a world where bands like Ingurgitating Oblivion, Nightmarer, and Nero di Marte (to name just a few) have further normalised the incorporation of moody atmospherics and doomy, Post-Metal dynamics into Death Metal – of whether or not Aeviterne have perhaps come a little too late to the party to truly reap the rewards of their talents? 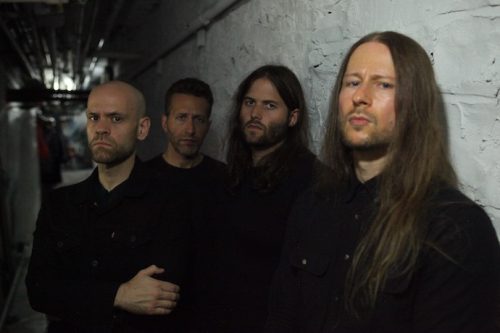 Thankfully The Ailing Facade doesn’t take long to reveal that, yes, Aeviterne definitely do have a lot to offer the world and are more than capable of carving out a distinct niche for themselves, one which relies just as much (if not more) on ominous, oppressive atmosphere as it does dense, discordant Death Metal riffage.

Don’t worry though, there’s certainly more than enough of the latter to go around, from the gargantuan, gut-wrenching squall of “Denature” to the tumultuous dissonance of “Obeyance”, meaning that the band’s first full-length certainly isn’t lacking in either punishing power or palpable aggression (Bussanick’s gritty, Gorguts-ian growl has, if anything, gained an even grimmer, grimier edge to it since the Flourishing days).

But, as time passes, you’ll discover that it’s the overarching aura of creeping, claustrophobic ambience which is the album’s not-so-secret weapon and which – whether it manifests itself in the hypnotic rhythms and sinister sub-currents of “Stilled the Hollows’ Sway”, the doomy desolation and brooding bass lines of “Penitent”, or the immersive instrumental strains of the title track – helps makes this record so much greater than the mere sum of its parts.

Similarly, it’s hard to pick out a single member of the group for specific praise (though, truth be told, I can’t imagine anyone other than Jacyszyn doing as good a job behind the kit, so often do his flowing percussive patterns serve as the unbreakable thread tying the songs together) as this album truly feels like a collective effort of many minds working in near-perfect harmony with one another.

Of course, the fact that this creative harmony is what gives rise to such chaotic complexity is not lost on me.

In fact, I’d even say that it’s this inherent contradiction – this electrifying tension between melody and dissonance, the constant push-and-pull between gravity-warping weight and eerie negative space (which, arguably, achieves its apotheosis during “The Reeking Suns”) – which makes this album such a thrilling and unpredictable ride each and every time you listen to it.

Ultimately then, while The Ailing Facade may indeed be the heir-apparent to The Sum of All Fossils in many ways, it is also clearly very much its own unique beast, one heavily inspired, by the band’s own admission, by the gloom ‘n’ grime of Industrial and Post-Punk (a fact which is particularly apparent on tracks like “The Gaunt Sky” and the album’s massive, multi-layered closer “Dream In Lies”).

As such it deserves to be judged not just as part of a larger legacy – though it is most certainly intertwined with an inescapable history – but as a bold new beginning, one which may well, one day, be recognised as a defining moment in the ongoing evolution of Death Metal.