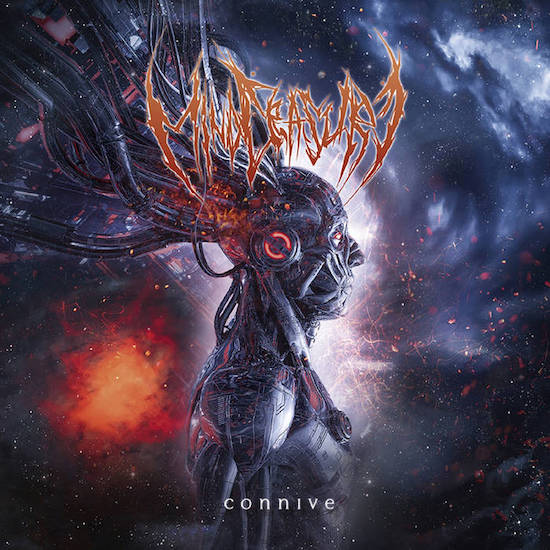 (The Greek black/death metal band Mind Erasure released their debut album last month, and it struck a chord with our writer DGR, as will become apparent if you read the following review.)

Mind Erasure landed in the net over the Valentine’s Day weekend back in February. The result of having a surplus of free time, I was able to explore a wide swath of upcoming releases and take a gample on quite a few of them. Spain’s AfterLife and Nightrage‘s latest release were some of the results of that musical binge and Mind Erasure‘s new album Connive was another.

Mind Erasure caught interest on the strength of their album art, which doesn’t really hint at much other than the logo suggesting a prog-death influence, but apart from that yours truly went in blind, and the experience was more enjoyable for it.

They are a hard band to describe; they jump through a huge collection of genre-hoops over the course of Connive‘s fifty-six minutes and just trying to nail it down to the core of their black and death metal influences doesn’t capture the full picture of what is happening here. 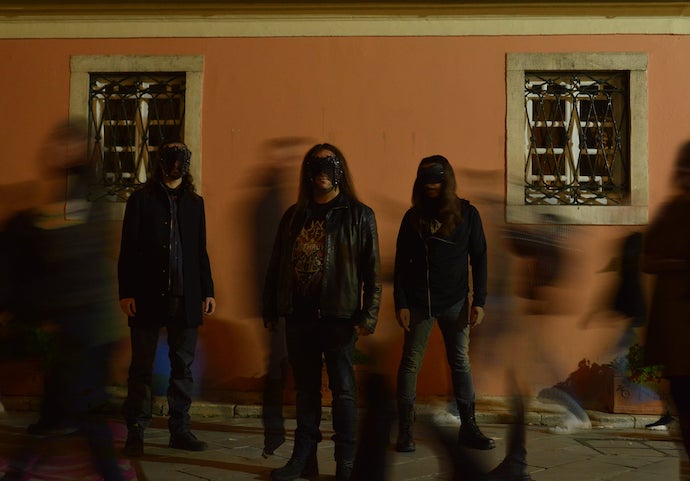 Mind Erasure‘s release history is interesting. Prior to Connive the group only had two demos to their name dating back to 2014 and 2016, and a few of those songs actually did make it onto this full-length here. But Connive‘s release seems to be a new starting point for the band, who added a new guitarist and drummer to the group before the the album’s release. You get the sense that the music here – and not just the demo songs that managed to survive the time up to the full-length – has been in the works for some time, and as a result reflects multiple years of influence working their way into the band.

Connive really is all over the map stylistically, which is why it’s difficult to pin Mind Erasure down as just a band crashing black and death metal influences together. There’s a lot of symphonic and folk metal working their way into the group’s sound; they give way to multiple prog-explorations’ and even get a little show-ey because it’s the year 2022 and if you’re going to be a death metal group you have to get a little ‘tech’ from time to time.

Which I think is how you wind up with what is effectively a debut album having a three part suite of songs at the end of its track list.

Since Connive is stylistically covering so much ground, you’d expect a deep dive to do the same, and to do so we’ll jump all over the place as well. Why not start with that three-part “As First Light Never Comes” series of songs? 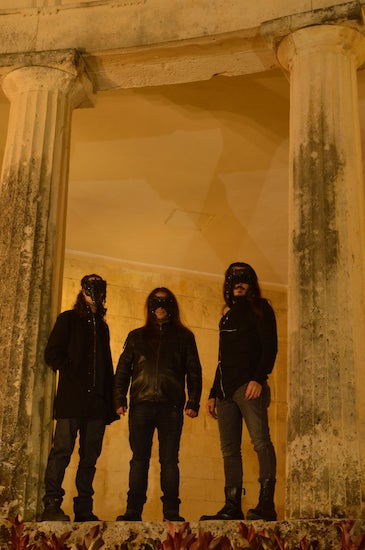 Mind Erasure‘s ambition to be much larger than their initial sound suggests should be made readily apparent by the time you reach the last few songs of Connive, yet there will still be a few surprises that’ll likely turn heads anyway. It’s clear that there’s a belief in what they’re doing on Connive, even if they have to do so themselves, so the few times you get to a spoken-word segment (such as the introduction to the song “Cataphasia”) it really is the band being about as scrappy as they can get.

That’s how you wind up with “Seal’s Break”, the opening track of that three-part “As First Light Never Comes”, being an acted-out moment as a preclude to nuclear war. It’s definitely a hell of a signal that you’ve reached the final movement of the abum when you get a bit of amateur theater right before a solid block of death metal with some throat-scarring vocals in the following song “Apocalypse”. The closer “Light’s Epilogue” reaches even further though, since the band decided to use its six-plus minutes to summarize the whole album, as well as having a crawling intro that somehow whiplashes from Slayer to SepticFlesh in about twenty seconds. Even though it’s so late in the disc, that opening stomp when the lyrics finally start in “Light’s Epilogue” is one of the strongest moments on the album. Mind Erasure sound gigantic and mean in equal measure.

Mind Erasure live by the phrase ‘if it’s worth doing, it’s worth overdoing’ and much of Connive plays out like that. It opens with a five-plus minute instrumental song and most of the following songs are well into the five-minute range. There is never just a straightforward song on Connive either; there’s always one extra element. You’ll never have a blackened death metal song, it’s always one of those plus some clean-sung choral parts. Mind Erasure enjoy reaching far beyond their genre descriptors and it helps to keep things interesting, especially when they’re asking to spend nearly an hour with you.

“Azrael” contains a slow, sung dirge that transitions into a snarled death metal gallop that just as quickly whips through a few folk metal tropes, whereas the song “Mind Erasure” is a brick of blasting metal for most of its run time, but even then there’s a hint of melodicism dancing around the edges of the whole affair. That the band then follow it with the eight-minute title song is fun from a stats-nerd perspective as well, but if you were wondering where Connive gets most of its punching-weight from, it’s the aforementioned three-part suite at the end and its title song. The actual “Mind Erasure” song is one of the shorter beauties here, only beaten out by “Pray For Salvation” – which gets to be the high-paced follower song to the instrumental intro.

There are absolutely moments throughout Connive where Mind Erasure‘s ambition far outweighs their actual resources but that’s been a theme of metal at large for some time now – and it may be partially our fault for encouraging it anyway. I focus so heavily on how long the disc runs because it does have pacing issues throughout. It seems like Mind Erasure decided that if they were going to put out a full-length they were going to write enough music that they wouldn’t have to worry about a follow-up. They started out here giving it everything they have. That does mean that those fifty-six minutes tend to stretch more than you’d like.

What’s odd though is that Connive does break up neatly into blocks so that every three to four songs play out like their own self-contained adventure. That is part of what makes Connive interesting. It is so highly unpredictable that the base formula it’s built upon finds itself augmented so often that it becomes an adventure just to hear what’s next. When the band are punchy and to-the-point like on “Mind Erasure” and “Cataphasia” they’re a lot of fun – as is any good riff-fest and deafening chug – and when they decide to write an epic song then it’s fun to go along on that adventure with them too.

Connive is a solid starting point to build from and is basically yelling about how much promise there is in Mind Erasure‘s future. It’ll be something to watch when they choose what direction to march in next.