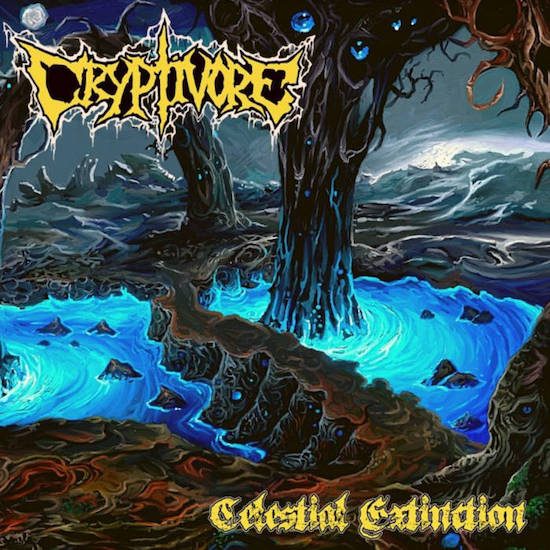 Those of you who have spent years listening to death metal as it began to take monstrous shape in the first decade of the genre’s spawning and evolution will easily recognize the stylistic tropes that make up the musical arsenal brandished by Cryptivore‘s debut album Celestial Extinction. Drawing influence from early days of Amorphis and Carcass, Rottrevore and Grave, Cryptivore’s sound is a hybrid of death-metal brutality and explosive grindcore fury, all of it swathed in melodies that evoke haunted houses and horrifying crypts.

But this Australian band’s first full-length (which is the solo work of Chris Anning) is one of those releases where the familiarity of the ingredients in no way lessens the thrill of listening to it. You can see all the knives in the drawer, but once they start flashing and slashing in such remarkably dynamic fashion you get caught up in the spectacle. That’s a tribute to Cryptivore‘s own obvious knowledge of and love for the genre ingredients, but it’s also the result of top-shelf instrumental and vocal technique and a real talent for writing songs that feel like non-stop roller-coaster rides.

And so it’s a genuine pleasure to share with you a full stream of Celestial Extinction in advance of its fast-approaching March 15 release by Bitter Loss Records. 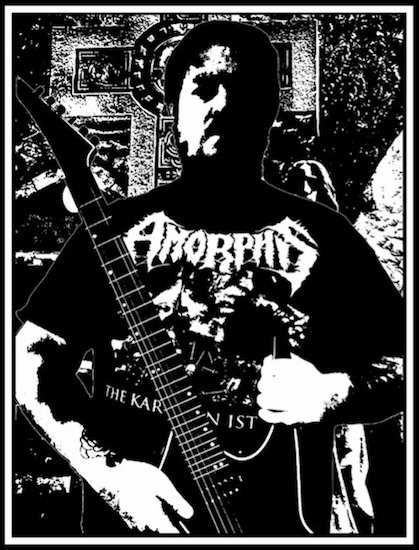 The album opener “Cocoon Hetacomb” hits hard and fast, through a dense mass of crazed and slashing riffing, obliterating drum assaults, wild soloing, and deep, monstrous growls. The fretwork leaps and darts almost faster than you can keep up with it. The tempos change on a dime, bringing in jackhammering chugs, eerie quivering leads, and melodic accents that are both dismal and sinister.

The multi-faceted approach to songwriting on display in the opener is vividly revealed through the other tracks as well. In rapidly changing fashion they combine cruel, mauling brutality, explosions of grindcore mayhem, bursts of head-butting groove, and threads of melody that generate an atmosphere of supernatural menace and horror.

The music juxtaposes different tonal qualities as well, with the riffing delivered with abrasive grit and the leads and soloing spurting, spearing, and slithering with reverberating clarity. The drums go off like gunshots in a storm, shifting gears with electrifying effect to augment the fast-changing riffs and moods. They’ll get your muscles twitching in sync with the grooves, and also make you feel like someone has pulled the trigger on a fully automatic weapon.

The songs are compact, almost all of them doing their dirty work in the two-three-minute range. But Cryptivore packs a lot into those confined spaces. The music jolts your spine, convulses in spasms of violence, leads you through dank, rotting crypts where nightmares dwell, descends into episodes of menace and misery, and rockets toward heights of unbridled ecstasy and terrifying majesty.

Because the tracks are so brief, they tend to leave a listener staggering. They feel like they end too soon, like a fast-moving vehicle that suddenly stops and pitches you face-first through the front window. But that’s not a bad thing, because each unsettling thrill-ride is quickly followed by another horror-show roller-coaster ride. Bloodied and helpless, you go through the window and then land in the back of another fast-moving car that’s also rapidly veering, vaulting, and descending.

There’s no real let-up from the start of the album to the finish — unless you count those slower parts in many of the songs that drag us into aural catacombs where sensations of suffering and fear choke hope to death. The result is that the album is a real rush to hear. The album itself rushes from track to track, gets your own blood rushing, and leaves hungriness for more. And there’s not a damned thing wrong with that.

On the Ides of March Bitter Loss will release the album on CD, vinyl, and digital formats. It’s especially recommended for fans of brutal grindcore a la old Carcass, and the stylings of Amorphis circa The Karelian Isthmus.