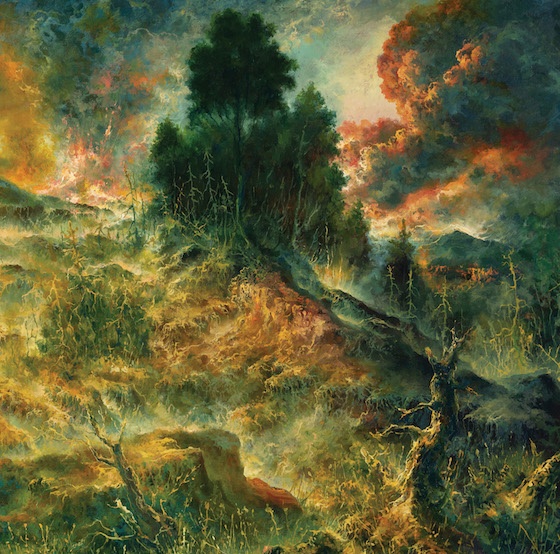 The cover art by Petri Ala-Manus for the forthcoming second album by the French band Epitaphe is stunning. The degree of intricacy in the painting is remarkable and justifies careful study, but the numerous fine details all contribute to the captivating extravagance of its overarching impact.

It portrays a natural setting and yet also seems surreal. The scene could be one we might find today, and yet is also primordial. It’s both intimate and vast. The storm-scarred skies might only be burned by a sunset but also might be the beginning of apocalypse. It’s beautiful, and it’s frightening.

Not coincidentally, these same qualities (and others) come through in the music. Especially when the album (entitled II) is heard straight through, the experience of the music, like the cover art, is stunning. Today we present one significant part of this larger panorama, one song from five tracks on the new album in advance of its April 11 release by Aesthetic Death and Gurgling Gore. The song’s name is “Melancholia“. 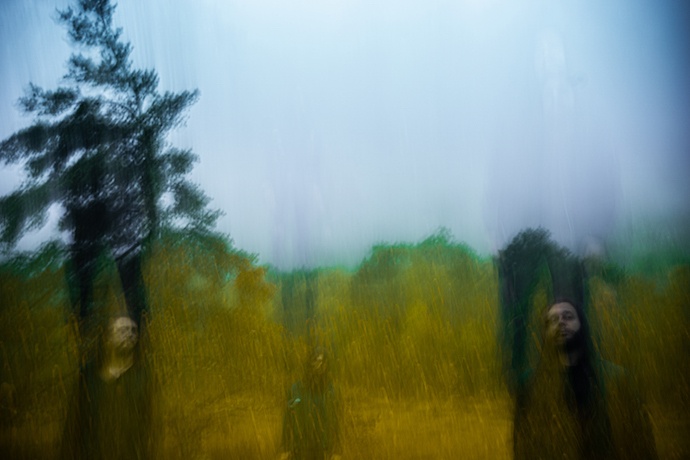 Epitaphe explain: “‘Melancholia‘ is a long journey, with many variations, tones and layers. It showcases the more progressive approach we took for this new album, without losing our Death Metal roots. It’s a very dark song, with a lot of twists and turns, including an unexpected atmospheric core. Except for the acoustic introduction, it’s the first song we wrote for II, and it pretty much laid the foundations for the whole album.”

At 19 minutes in length, “Melancholia” is vast. Almost immediately, the abrasive guitars create unnerving tension and the extraordinary drum performance generates sensations of dangerous upheaval. The turmoil and turbulence of the sounds soon reach electrifying heights of intensity, just before the ravaging vocals enter the fray.

The riffing writhes and roils in madness and seems to moan in agony; the voice howls and roars with unhinged ferocity; the low end sounds like an earthquake in progress; the drumming is persistently startling. Like the cover art, the music also opens the mind’s eye to frightening panoramas through an extended guitar solo that, true to the song’s title, is melancholy in its mood.

But as foretold by the band, the song is a long journey with many variations. It includes a softer and beautifully enthralling instrumental segment in which the band’s progressive and jazz-like influences come to the center of the stage, along with an ethereal shimmering backdrop and singing whose echoing tones are entrancing. There’s a feeling of wonder in this long segment, and a glimmering brightness that’s spellbinding.

But we haven’t completely left the portrayal in the cover painting. The music gradually becomes frightening again, though the band even more strongly reveal their prog-metal inspirations. Like the painting, their richly layered maneuvers are intricate and crafted with care, but all contribute to an overarching impact, guiding the listener with a sure hand through changing moods of fear and despair, longing and grief, turbulence and collapse, and ultimately ushering us into a haunting dream through the long ambient segment that closes the track.

The album as a whole is stunning, but so is this one song standing alone:

As with Epitaphe‘s debut album, the sound design and mix of II was crafted by James Leonard at Plastic Lobster, and the mastering was done by Greg Chandler at Priory Recording Studios. Aesthetic Death will release it on CD, and Gurgling Gore will handle the tape release. For more info, check these links: 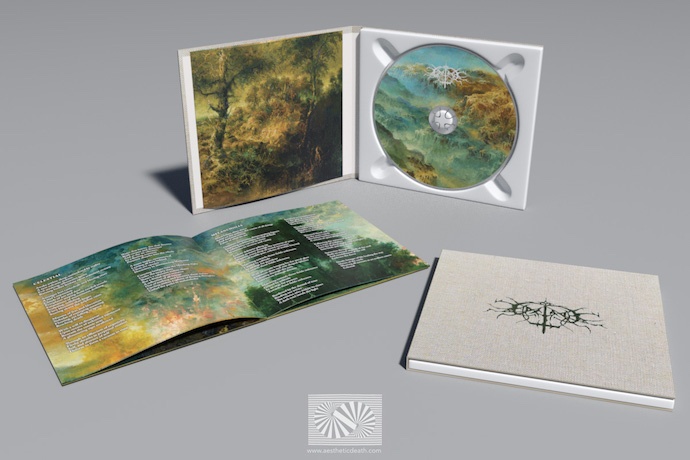 No Responses to “AN NCS PREMIERE: EPITAPHE — “MELANCHOLIA””