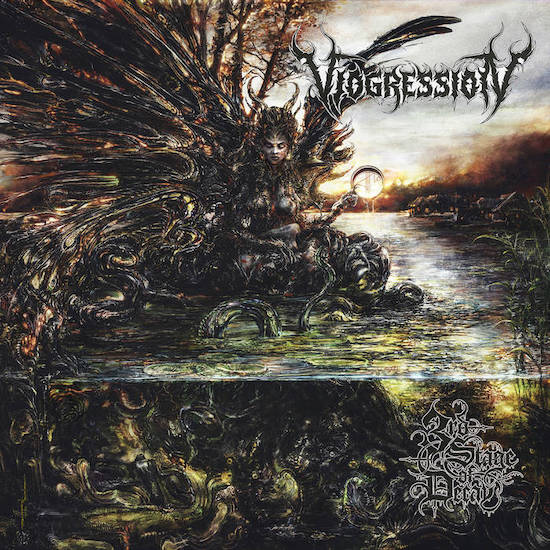 Until recently I had never heard Viogression‘s 1991 debut album Expound and Exhort, which led to this Wisconsin band mounting a world tour with Death and Pestilence. Even today that album has a cult following who recognize it as a criminally underrated gem of the early death metal scene, one that draws comparisons to the likes of Death and Obituary, to Morbid Angel and Morbid Saint. And I’ll say now, based on personal experience, that it holds up very well 30 years later.

From all accounts, even that first album didn’t get the attention it deserved when it came out, largely due to negligent label backing. But what happened afterward was like a second hammer blow to the band’s legacy — including the premature release of an unfinished second album (Passage) the year after Expound and Exhort, and then a 9-year hiatus, finally broken by a 2014 EP.

The band continued to perform live, but only now, 30 years after their debut full-length, are Viogression releasing a third album. Its name is 3rd Stage Of Decay. 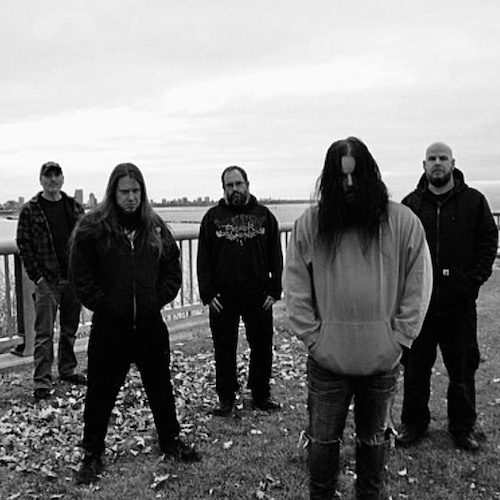 Not surprisingly, the line-up that recorded this new record differs significantly from the one that recorded the debut. although Brian DeNeffe is still behind the mic (and has never sounded better). All together, the band includes former members of Sarcophagus, Forest of Impaled, Dying Fetus, Broken Hope, Divine Empire, Crowned Beheaded, Brutality, Cynic, Dr. Shrinker, and Morta Skuld. In a nutshell, there;’s a ton of talent in the band, and it shows in the music.

While the new music still definitely maintains its connections to the old-school Wisconsin death metal sound, it’s also obvious that the new blood has contributed to important differences. Moreover, it benefits from the best production of the band’s career.

It would not be outrageous to now call Viogression a progressive death metal band, or at least one that’s as interested in experimentation and vivid melodies as it is in sinister moods and savage attacks. As proof of that, we present a new album track named “Cipher” — a relentlessly dynamic song that’s packed with thrilling surprises.

The gentle strummed chords and shimmering cymbal at the outset of “Cipher” may defy expectations, and as forecast above, it’s not the only intriguing aspect of the song. Soon enough, the band start jolting the listener’s spine and executing slashing, swarming, and jagged riffage over tumultuous drums, scalding screams, and vehement roars. But bursts of fluid, beleaguered melody and the sparkle of shining notes emerge as well.

Among the near-constant changes in the song are nimble and moody bass arpeggios, gorgeous extended guitar solos that tug at the heartstrings and light up the mind, mesmerizing leads almost too abundant to count, and continually electrifying drum fills and ravaging vocal intensity. The music soars to zeniths of eye-popping splendor, becomes soft and contemplative, and at the end suddenly switches to a sequence of dancing symphonic strings and warm organ tones, accompanied by chanted choral voices.

It truly is a wondrous song, and one that’s irresistible to come back to. The more you listen, the more you discover, and the feeling of wonder persists.

3rd Stage Of Decay is nearly an hour-long adventure, graced by the cover art of the great Zbigniew M. Bielak. It was recorded and mixed at Belle City Sound, engineered and mixed by Chris Djuricic, and mastered by Dave Otero.

Five labels have joined together for its release on April 17th: Satanath Records (Russia), Murdher Records (Italy), Moribund Records (USA), Dark United Media (USA), and Pest Records (Romania). You’ll find more info about the release via the links below, and you’ll also find a stream of the previously released track “Caliginous Conflagration“, which is a free download at the Satanath Bandcamp page.