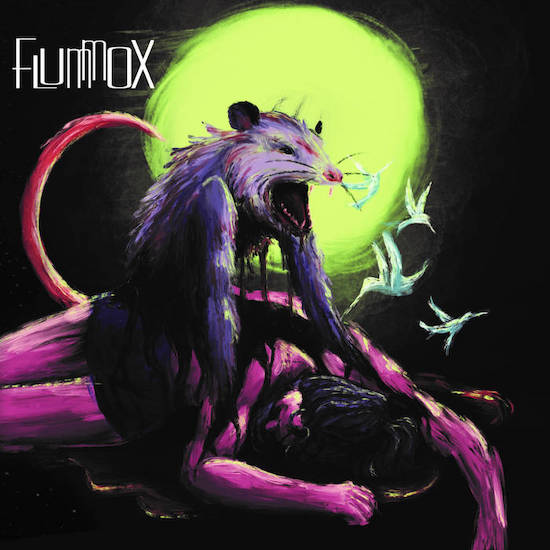 We have two premieres at our site today. The first of them was a new song by the legendary Wisconsin death metal band Viogression. The contrast between that one and the one we’re presenting now could hardly be more stark. I suspect that will be pleasing to the band who’s the focus of this premiere, because their mission is… to flummox… to flummox conventions and expectations.

It’s been a while since we checked in with this Nashville band, and so it may be worth repeating something I wrote long ago:

The Merriam-Webster Dictionary tells us that no one is completely sure where the word flummox comes from, though its first known use was in Charles Dickens’ debut novel, The Pickwick Papers, published in 1837. It means “to confuse”, and among its synonyms are “baffle”, “perplex”, “bewilder”, “bemuse”, and “mystify”. And when you understand all that, it’s not confusing at all why this band chose Flummox as their name — because (as forecast above) flummoxing listeners seems to be their primary mission. 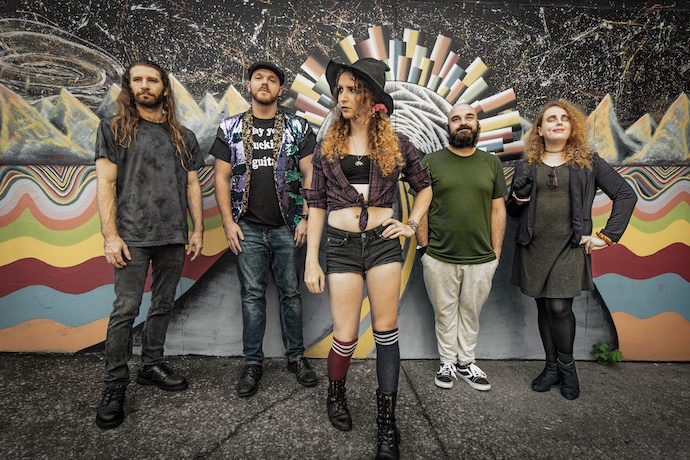 We’ve devoted attention to Flummox in past years, with Austin Weber calling their debut album Phlummoxygen “a modern classic”. We also premiered a song from their second album Selcouth, and then premiered a video for a track off their four-song 2017 demo Garage Prog.

But man, we’ve missed a lot since then — an album (Intellectual Hooliganism), a pair of EPs, and a bunch of singles. It’s past time to do some catching up, and the band’s new album Rephlummoxed provides a fitting occasion. This new full-length, which will be out April Fool’s Day on Needlejuice Records, re-imagines and re-records some of the group’s favorite songs from past albums.

In doing that it gave the band a chance to showcase a revamped line-up that includes the original core of Alyson Blake Dellinger, guitarist and co-founder Drew Jones, and drummer Alan Pfeiffer, as well as new members Max Mobarry and Chase McCutcheon on guitar, and keyboardist Jesse Peck. 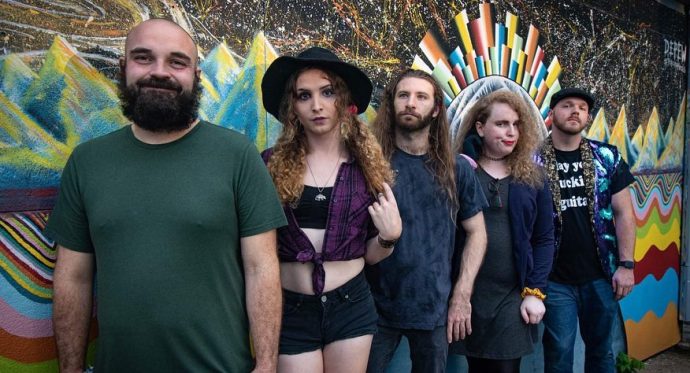 To help spread the word about the album, what we have for you today is a completely wild video for a completely wild song. This one, “Flummoxing Act I: Garbanzo’s Leap“, first appeared on the band’s 2014 debut studio album Phlummoxygen.

Tempting as it is to provide some commentary about the video (which was directed, edited, and conceived by Haven King), it’s probably best to let you experience all of its head-spinning absurdity without any spoilers.

As for the music, it will spin your heads too. The band recommend their music for fans of Mr. Bungle, Mastodon, Danny Elfman, Primus, and King Gizzard & the Lizard Wizard. You may begin to understand why when you hear this.

To be sure, the song’s beefy bass lines and neck-snapping drum beats will get your head moving, and the sweeping and swirling synths might send your mind’s eye into space, but the music goes other places too, with abruptly changing tempos, creepy haunted-house melodies, extravagantly soaring vocals that turn to screams, demented spoken words, electrifying spasms of instrumental chaos, bits of darting electronica, episodes that sound like a mad carnival in progress, and more.

And one of the biggest surprises is that for such a crazed experience the song somehow turns out to be… catchy.

We’re also including the previously premiered songs “Planet Cancer“, “Custodian Ralph“, and “Hummingbird Anthem” (do you like banjo music?), all of which appear on the new album.

One Response to “AN NCS VIDEO PREMIERE: FLUMMOX — “FLUMMOXING ACT I: GARBANZO’S LEAP””