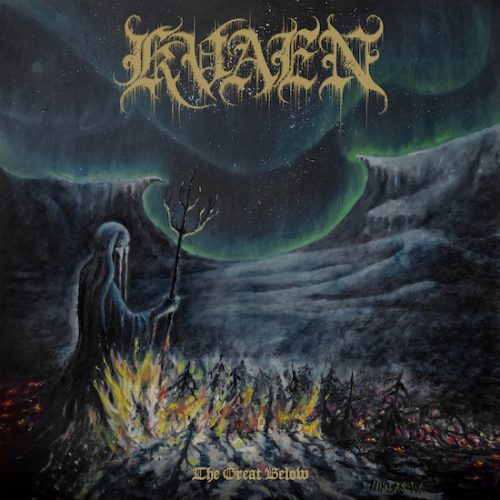 (Andy Synn checks out the new album from Kvaen, set for release Friday, to see if the band’s fire still burns as brightly)

I’d hazard a guess that most – if not all – bands, when they’re first starting out, do so with the dream that their first album is going to be the sort of massive breakthrough that instantly puts them on the map and establishes them as a force to be reckoned with.

What a lot of them probably don’t consider, however, is that this sort of instant, straight-out-of-the-blocks success can be both a double-edged sword and an albatross around your neck.

After all, I’m sure we can all name a number of bands whose debut immediately got them over with the fans but who, for whatever reason, never quite managed to achieve that same level of impact or intensity again.

Case in point, Kvaen‘s debut album, The Funeral Pyre, was unquestionably one of the best albums of 2020, one which seemed to come out of nowhere and immediately establish the band (in reality the solo project of multi-instrumentalist Jakob Björnfot) as a force to be reckoned with.

Two years have passed since then, however, and the impending release of the project’s second album, The Great Below, now has two major questions hanging over it… can lightning strike in the same place twice?

And, if so, can Kvaen capture it in a bottle once again?

To be quite honest, right now I can’t give you a definitive answer to either of those questions (though I hope to do so by the end of the article).

What I can say, however, is that The Great Below is most definitely not just a carbon-copy of its predecessor – right from opening salvo of “Cauldron of Plagues” you can tell it’s an altogether darker and more aggressive and… dare I say… more serious piece of work – which is a smart move, as attempting to simply reproduce the spontaneous success of The Funeral Pyre wholesale would undoubtedly have backfired.

As a result, how you rate this record – and how much you enjoy it – will probably depend a lot on what you want it to be.

If you’re after something that hits the same sort of heroic, hearts on fire, heights as “Revenge by Fire” or “The Funeral Pyre” then you may end up a little bit disappointed, as the majority of The Great Below is noticeably less epic (though both the ridiculous lead-work during “Damnation’s Jaw”  and the magnificent finale of “Ensamvarg” are right up there with anything off the band’s first album in terms of shameless melodic excess).

However, if you liked the band’s first album but are craving something a little bit harder, a little bit more purely “Black Metal” in the vein of tracks like “Septem Peccata Mortalia” and “Bestial Winter”, then there’s a good chance that The Great Below might actually appeal to you even more, as several of these songs share quite a few sonic similarities with more infamous artists like Goatwhore (“The Great Below”), Necrophobic (“Sulphur Fire”) or latter-day Dark Funeral (“Your Mighty Has Fallen”).

That’s not to say that Kvaen have forgotten how to write ridiculously catchy hooks (both the aforementioned “Damnation’s Jaw” and “Sulphur Fire” are as virulent and voracious as the black plague, and far more fun).

Nor have they totally abandoned all their more majestic and mythological inclinations (the album’s two longest tracks, “In Silence” and “The Fire Within Him Burns” both take the listener on an impressively dynamic, though undeniably darker, journey through the peaks and valleys of the Black Metal landscape, with the former in particular being arguably the best track on the album, despite being its most demanding overall).

But I can predict right now that some of the reactions and responses to this album are likely to be quite divisive, simply because it doesn’t necessarily give people exactly what they might expect.

Does that make it better, or worse, though?

Honestly, that’s still a hard question to answer even now, despite having finally had the chance to put all my thoughts into words.

It’s less instantly infectious, that’s for sure, but arguably even more intense. And while it’s less grandiose, the fact that it’s much more grounded, and focussed more on metallic heaviness than melodic hookiness, means that it hits you in a very different way.

And maybe that’s for the best. Because rather than just resting on their laurels and trying recreate their previous success, Kvaen have instead taken the more difficult – but potentially more rewarding – path, one that should set the stage for a much longer and more satisfying career, rather than seeing them burn out as just a one-hit wonder.

3 Responses to “KVAEN – THE GREAT BELOW”