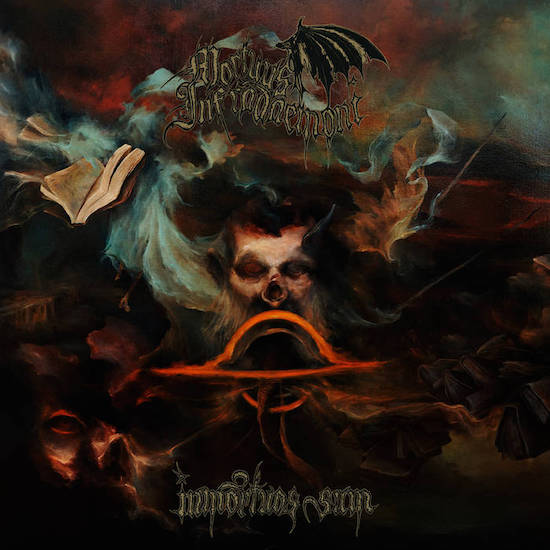 “Sumptuous” might not be the first word that springs to mind in considering a new album by a band who proudly embrace baleful black metal traditions from the mid-’90s, but it actually suits the forthcoming third full-length by Germany’s Mortuus Infradaemoni.

For one thing, the band have loaded the new album Inmortuos Sum with more than an hour’s worth of music, which perhaps should be expected given that a long 13 years separated this new one from the band’s last full-length, Imis Avernis. But it is lavish in other ways, beyond its significant length, as you’ll discover through our complete premiere of the record today. 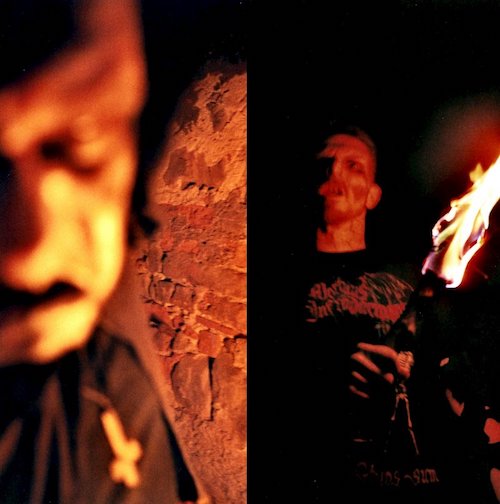 To be sure, the music on the new album, like that of the standard-bearers who influenced it, can be ice-cold and imperious, shrouded in an atmosphere of the supernatural, and also rough and raw, connecting with the genre’s fuck-off punk roots. (Among other things, the sound production gives the songs a feeling of authenticity and immediacy, like it was recorded in a rehearsal space with absolute disdain for polishing the output with technical gimmickry.)

But it doesn’t take long to realize that the band’s instrumental skill is crazy impressive, which it needs to be, because they’re capable of switching tempos and moods on a dime. And that’s another reason for thinking of the album as sumptuous.

Take, for example, the record’s second track, “Madness Rides With the Star-Winds“. It opens in feral fashion, with a quick skull-clobbering drum assault, cruel slashing chords, burbling bass madness, and venomous and vitriolic growls. But it switches gears constantly, slowing in order to choke the senses with morbid and morose sounds, and accelerating into fiery, blast-fueled frenzies augmented by deranged vocal cacophony.

The music is so wildly exhilarating that it seems like it’s going to careen out of control, but instead the song drops to a hideous crawl and then marches to the gallows, drums pounding and the lead guitar quivering in an intersection of agony and ecstasy. Solemn wailing chants join in with head-moving chugs, and the music becomes almost majestic in its bleakness, just in time for the bass and the drums to put on an electrifying show.

And all that happens before you’re barely past the halfway mark of this 12-minute extravaganza. The changes keep coming as the minutes tick by, delivering visceral thrills and sensations of blood-freezing horror.

“Madness Rides With the Star-Winds” isn’t the only unusually long song on the album. “Ossuarium of the Black Earth” breaks the 11-minute mark, and the title track (which closes the album) edges past 14. Those three are the most opulent and labyrinthian excursions among the tracks, while the comparatively shorter songs tend to be full-bore rampages.

Those shorter songs hurl the listener through relentlessly blood-pumping thrill-rides, from the supercharged rampage of “Omne Vitae In Tenebras Mergit” (which features utterly deranged vocals, maniacally rabid riffing, and one of the most jaw-dropping drum performances you’re likely to hear this year) to the savage, punk-fueled romp-and-stomp of “Abhominog” (which itself also explodes in a fireball of violent chaos), the blazing tirade of “Der Todten Tanz“, and the rampant delirium of “Burning Time and Space“.

Actually, the drumming in all those songs is lights-out, and although the production isn’t shined up, the bass lines (which fly like bats) still vividly come through. The band sound like they were possessed when they wrote and recorded these hellishly exhilarating tracks, perhaps especially in the diabolically insane vocals.

To be sure, Mortuus Infradaemoni sound possessed in the other long songs we previously mentioned, but they use the extra room to sometimes maneuver in less balls-to-the-wall fashion as well, and to throw in some startling instrumental accents. As you make your way through them, you’ll find times when your head will want to pump like a piston and your hands will want to lift invisible oranges toward the heavens in the throes of sulphurous glory — plus other times when you might feel like curling up in a corner, hiding from hideous menace, but with your blood still pumping.

But to be honest, even over the course of an hour this isn’t an album that gives you much chance to breath or to replenish your bodily stores of adrenaline, and it’s so saturated with sensations of supernatural terror that it might disturb your sleep as well. The madness, however, is so sumptuous that it’s contagious. There’s a good chance that if you join this Wild Hunt, you won’t want to leap off your racing devil-steed until it’s run its course.

Inmortuos Sum is the work of only two (frighteningly talented) people — Profanatitas (drums, bass, vocals) and Nathaniel (guitar, vocals), both of whom were at one time members of Lunar Aurora. The arresting cover art is the work of Rodrigo Pereira Salvatierra.

Inmortuos Sum will be released by Iron Bonehead Productions on March 25th, on CD, vinyl LP, and digital formats.