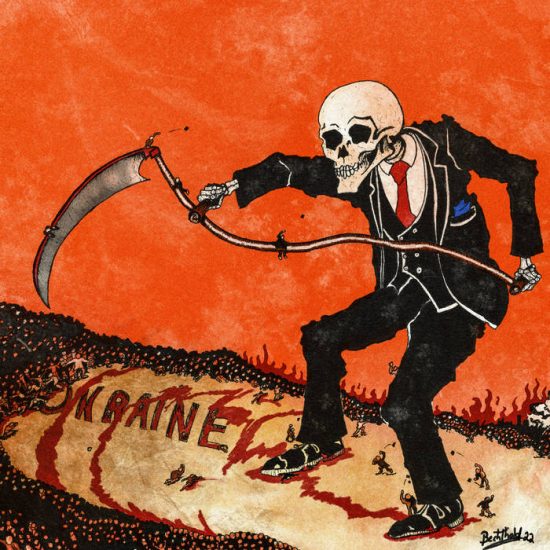 The real-world footage compiled in the video for Kanonenfieber‘s new song “Stop the War” is so powerful that it could be accompanied by a child singing a nursery rhyme and it would still be moving. But the song is every bit as powerful as the imagery. 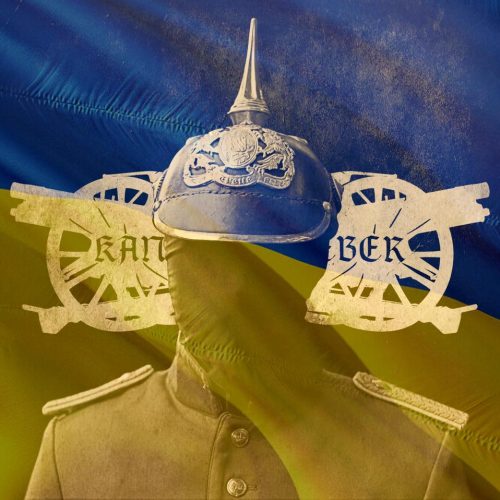 Last year, through their debut album Menschenmühle, Kanonenfieber displayed their formidable prowess in making music that’s thematically centered on the tumult and horrors of war. They’ve done it again this year with the Yankee Division EP (just released here for streaming yesterday), and now there’s this new single.

The video unfolds in roughly four parts, as does the music. Ominous and bleak at first, the music matches the imagery of once beautiful cities threatened by the start of a brutal invasion. The music explodes in a soaring fury ladened with melancholy as the video depicts scenes of shocking devastation. The music softens as the video provides footage of protests. And then, coupled with film of armed resistance, the song throbs with a fiery pulse and then soars again.

The single is available for digital download on Bandcamp and other digital platforms. Kanonenfieber are donating all earnings to the “Caritas Emergency Aid – Ukraine” organization (info here). They’ve already raised and donated a surprising sum from this single. You can add to it through the “name your price” option at Bandcamp. The band have a message there that’s worth reading. 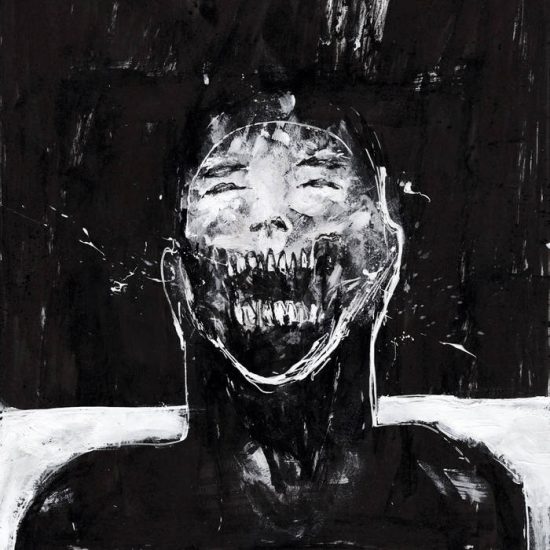 My next selection is also connected to the horrific invasion of Ukraine, and it comes from a Russian band who named themselves after Novichok, “the chemical weapon that has become synonymous with political assassination” (Alexei Navalny was one of the well-known victims of the nerve agent, though he survived). The band chose the name not in support but in protest of a murderous regime. There are now fears that Putin will resort to chemical agents in the Novichok family to further terrorize Ukrainian citizens and resistance fighters.

At one time Novichoke donated proceeds from their music to Gulagu.net, an activist human rights project in Russia. They say that’s no longer possible because the sanctions against Russia prevent Bandcamp from transferring money to them. They ask you to donate in other ways of your own choice.

Here is a selection of comments left on the Bancamp page for the band’s 2021 EP Wounds:

“Musical torture against state torture. This EP is a monumental slap in the face, with unheard violence.”

“The sonic audiology of humanity’s car crash on planet earth/hell. These three tracks WILL BLOW your ears and mind into tiny little pieces. FFO Vermin Womb, Full of Hell and Helpless.”

“A hellish chasm of blackened death metal recommended for fans of Portal and Altarage.”

“Accurate name! This is short but ridiculously crushing. When this band releases a full length it will sweep its listeners from the face of the planet Earth, and its lyrics will too.”

“This obliterated my ears out of existence. Completely body-and-soul crushing from beginning to end. Be forewarned; you will be utterly decimated by this release.”

“This will devastate you.”

You get the idea? 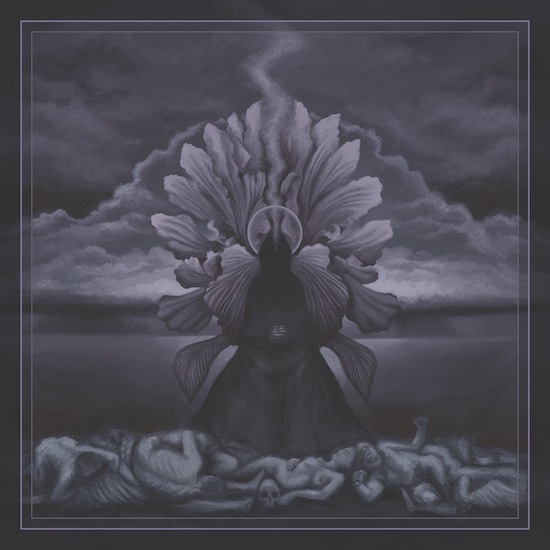 The next song I picked, “Rise & Fall“, is a sharp turn from what precedes it in today’s round-up, but in its own way it’s just as powerful, and profoundly moving.

This is an exception to our porous rule about singing, but Anne K. O’Neill‘s voice is so enthralling that it didn’t require a second thought to recommend this track. The music is equally enthralling, joining together bright strummed chords, ringing arpeggios, pulsing electronic tones, and primitive tympanic booms. But it’s O’Neill‘s heartfeklt vocals, both husky and soaring, that steals this sad and spellbinding show. The video is hauntingly beautiful too.

“‘Rise and Fall’ was written the day after my grandfather passed away as a means to reflect, process, and express gratitude for him. As a whole, it is a triumphant ode to life and death, in terms of both micro and macrocosm. Everything exists in the past, present, and future simultaneously at any given moment, and in that, we are all beautifully immersed in infinity and the people we love are ‘alive’ even when they’re physically no longer present; especially when we continue to speak of them, to tell their stories, and celebrate their existence.”

The name of the album is Ancient Tomes Vol. 1: Mother of Light, and it’s set for release on May 20th by Svart Records, which seems the perfect label for this music. 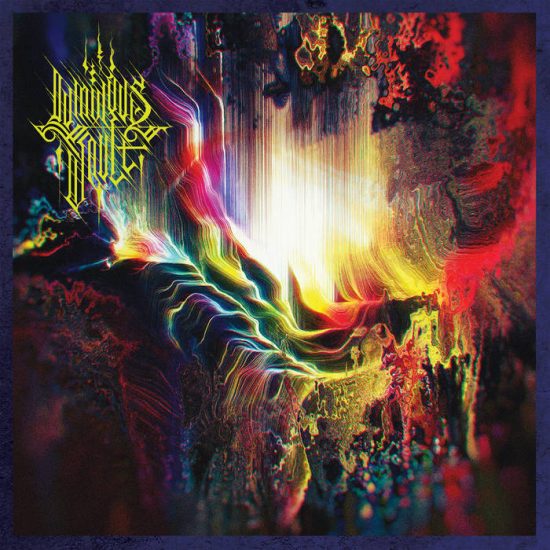 Now we’ll leap across to the other side of the North American continent for something whose amalgam of styles and sounds I found completely fascinating.

“Regeneration” melds together big body-moving electronic beats, sparkling and searing guitars whose yearning and tormented tones become mesmerizing, glorious synthwave accents, and harsh vocals that scrape like a rasping metal file. The beats change, becoming both manic and stately, as the surrounding sounds, both harmonious and disturbing, deepen the spell with each passing moment.

The song is from a debut album named Animate The Emptiness by this New York City duo — guitarist/vocalist Mario Diaz de Leon (Oneirogen, Bloodmist) and bassist/vocalist Samuel Smith (Artificial Brain, Aeviterne). It features cover art by Fivetimesno, and it’ll be released on May 20th by Profound Lore. 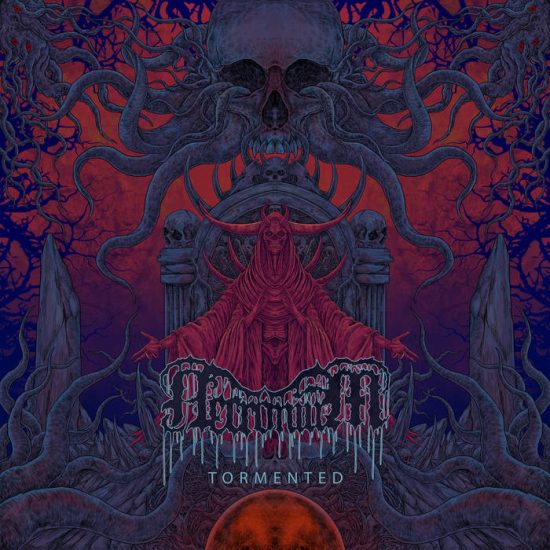 One good stylistic amalgam deserves another, though Necronium‘s alchemy is very different from that of Luminous Vault.

The first song that comes up next is “Tormented“. The piercing and preternatural solo that launches the song over ominous chords makes a striking first impression, and then the music begins to romp and ravage. Fueled by massive HM-2 distortion, galloping drumbeats, and maddened howls, and punctuated by furious blasts and savage tremolo’d fretwork, the exhilarating and obliterating music spawns remembrances of Entombed and Black Breath.

When the song slows and heaves, it sounds like demented wraiths have been set loose from whatever sorcerous chains once bound them, and there, the second solo is spine-tingling in its eeriness. To conclude, Necronium mount a skull-hammering chugfest that will leave you a few inches shorter than before.

The second song, “Astraphobia“, begins in an agonized crawl, both desolate and towering. A little bass arpeggio provides the segue to another punk-fueled gallop and another dose of massive riffing accented by delirious leads. The vocals are still terrifically raw and ravaged, a gritty braying sound that’s as powerful as it is unvarnished. This song will pump your head up and down too, and includes a freakishly ecstatic and frightening solo.

These are the debut singles of a one-person Spanish band, and you’ll find explanations of their themes at Bandcamp, where both are available. The cover art is by Fendie Skywalker. I want more! 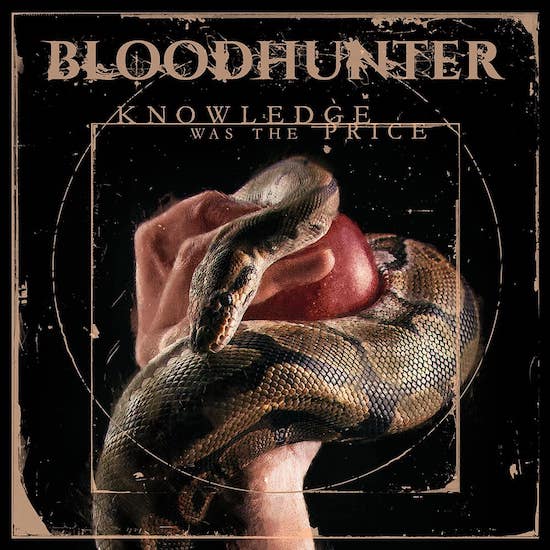 My fellow NCS slave DGR pointed out to me that, five years after Bloodhunter‘s last album The End of Faith (for which we premiered a heart-pounding, high-intensity song), this Galician band have a new one on the way. To spread the word about it they released a video for a new song called “A Twist of Fate To Come“.

After five years, frontwoman Diva Satanica still snarls and howls like a famished panther, and still makes a striking visual impression. Behind her, the rest of the band stir up a jolting and venomous race, augmented by swirling and soaring soloing. It will get your own blood racing too.

The title of Bloodhunter‘s new album is Knowledge Was The Price, and it will be released by Maldito Records. 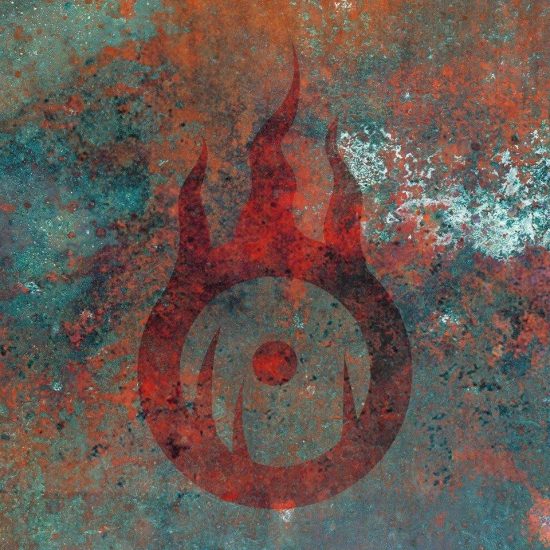 And finally I’ve included a new video for “Star Born“, a second single off the forthcoming second album by Copenhagen-based The Vision Ablaze.

This band tend to mix together clean and harsh vocals, but there’s no singing in this one, just crazed, teeth-bared howls and roars. The song itself is a spine-jarring and viciously feverish experience, but the forlorn melodies that swim languidly through intervals in the turbocharged tumult create a compelling contrast. Really good video too….

The band’s new album is named Embers, and it will be released through Prime Collective in May 2022.