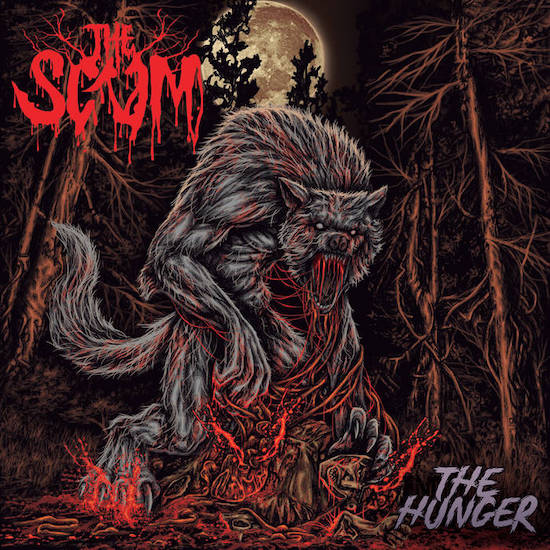 We’re about to bring you a new song for your abused ears. It will take you about two seconds to realize that it doesn’t deal with any deep philosophical subjecta. Look at the song title. Look at the band name. Look at that cover art!

For the moment you’ll have to look elsewhere for your philosophizing. Now it’s time to revel in the grand old death metal tradition of horror — of unnatural wolves and disemboweled corpses. And to guide us in our gruesome revels we owe thanks to The Scum, who come our way from the topographically dramatic city of Manizales, a mountainous Colombian cradle of both coffee and extreme metal.

The band’s second album, The Hunger, is set for co-release on April 18th by Satanath Records and the Colombian label Wild Noise Productions. And what is the means by which the monstrous hunger is sated? The song title tells us: “I Drink Your Blood and I Eat Your Skin”. 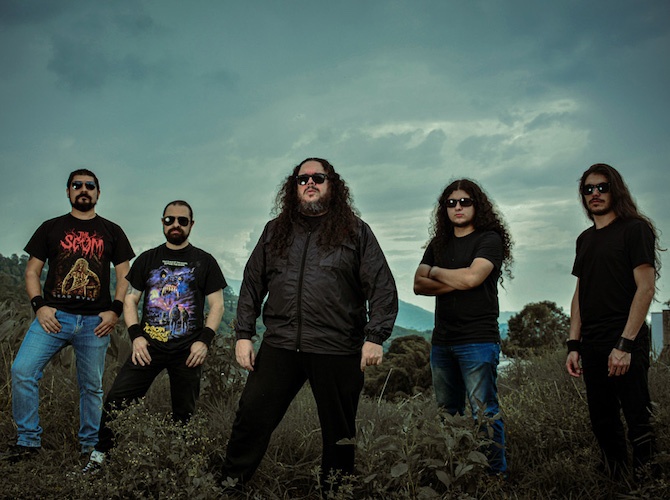 Lovers of horror should already be interested, even if they haven’t heard this band’s previous releases, but as a further come-on the labels make reference to the likes of Entombed, Benediction, Unleashed, Napalm Death, and Sinister. To further cinch the connection to old school death metal, they also tell us that The Hunger was mixed at Tomas Skogsberg’s Sunlight Studios and mastered by Dan Swanö at Unisound.

But now let’s turn to the gory red meat of the matter — the music itself. What this new song brings us is not mewling comfort but a brazen barrage, a barrage of shrieking strings and mauling riffage coated in corrosive HM-2 distortion, propelled by thundering bass lines, skull-popping snare attacks, and furious fills. If the werewolf on the cover could fashion words, it would sound like the ravenous growls of vocalist José Fernando Ospina.

The attack doesn’t last long, but long enough for deranged, fret-melting solos to spurt forth like gushes from an open vein, and for the band to inflict bursts of jolting spinal trauma. It’s all wild, an adrenaline-fueled romp that feeds the hunger for crushing and crazed death metal executed with authentic sound and spirit. See for yourselves:

The Hunger was recorded and mixed at Bad Home Studio Manizales (Colombia), and all guitar solos were recorded by Julian Gil Monroy. The album’s ghastly cover art is the work of Yan Sek. Layout, and the booklet was created by Ana Caballero.

Be sure to also check out the new record’s title track, which you’ll find below along with pre0order links (and which is a free download at Satanath‘s Bandcamp page for the album)..