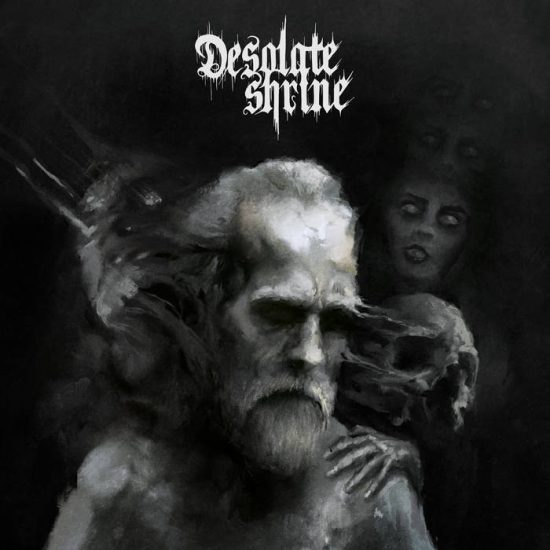 In 2017 our man Andy Synn reviewed Desolate Shrine‘s Deliverance From the Godless Void (along with the band’s preceding three albums), calling that fourth full-length in the group’s discography “another triumph of will and wickedness, and well worth getting hold of if you’ve ever had an urge for a truly masochistic metallic experience.”

After a 4 1/2 year wait this devastatingly talented Finnish trio now return with their new fifth album, Fires of the Dying World, which Dark Descent Records will release on March 25th. The wait is now only days away from ending, but today you’ll get to hear the album without any further delay, as we present a full stream below. 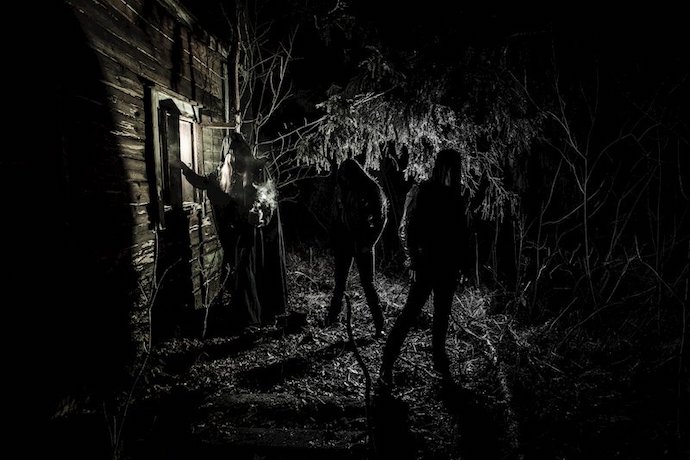 Once again mainman L.L. handles all the writing and instruments, with vocal duties shared by R.S. and M.T., and once again they’ve continued their ascent to ruthless death metal domination.

They set the stage with a sublime instrumental opener that’s melancholy, mysterious, and menacing — and then obliterate that soft spell with the roiling, howling, and hammering savagery of “Echoes in the Halls of Vanity“. With the lyrics ejected in gargantuan roars and ghastly scrams, the riffing drills, scythes, and crushes as the drums thunder and clobber, creating overpowering onslaughts of sound.

The song quickly re-introduces listeners to L.L.‘s diabolically gifted songwriting aptitudes, which not only melds together a variety of mauling and skull-splintering riffs and percussive assaults but also leavens the turbulent, traumatic, and neck-bending ruination with high swirls of supernatural melody that are as beguiling in their clarity as they are eerie and dismal.

The fiendish dynamism of that song is also on extravagant display in “The Dying World“, which both jackhammers and lurches, booms and batters, and sends seething and searing filaments of melody into the mind along with waves of soul-splintering hopelessness. The song is capable of causing the listener to heave in sync with the music’s own morbid momentum, but is equally effective in generating visions of chaos.

In the center of the album “The Silent God” awaits. By far the album’s longest track, it explodes in turbocharged attacks of stupefying savagery, drums blazing like automatic weaponry and guitars cutting like massed circle-saws, with the vocals as criminally insane as ever.

A full 10+ minutes of that might leave listeners headed to trauma wards, but the band once again blend in other experiences, creating sensations of towering pitch-black grandeur, moaning grief, and pile-driving destruction. It drags us through foul and freshly up-turned cemetery earth, surrounded by the flicker of audio ghost-lights, uses slowly ringing guitars and humming bass tones to lull us into an uneasy spell, hurls us without warning into a war-zone of breathtaking violence, and then uses the tinkle of piano keys to leave us with a spine-tingling chill at the end.

In the three songs that remain after that daunting centerpiece, Desolate Shrine continue to shift their soundscapes in gripping fashion, ranging from the apocalyptic terrors, feral gallops, and pavement-splitting stomps of “Cast to Walk the Star of Sorrow” to the gloom-soaked trudge and floating drift of “My Undivided Blood” through a macabre poltergeist realm, and the stupendously calamitous and horrifically mesmerizing closer “The Furnace of Hope“.

There’s no chance of losing interest over the course of these seven tracks. There’s too much variety of mood, momentum, and instrumental texture for that, so many changing episodes of blood-congealing majesty, haunting and harrowing eeriness, and monstrous mutilation. Indeed, Fires of the Dying World is so damned good that it’s not too soon to predict it will rank on many a year-end list.

But don’t take our word for it:

The new album again features cover art by L.L., and he also recorded and mixed it, with mastering performed by Damian Herring at Subterranean Watchtower Studios.

Dark Descent will release the album on CD, cassette, and digital formats, and all are available for pre-order now. A vinyl edition is coming later this year.

5 Responses to “AN NCS ALBUM PREMIERE (AND A REVIEW): DESOLATE SHRINE — “FIRES OF THE DYING WORLD””