(We present the glorious 90th edition of THE SYNN REPORT, and on this milestone occasion Andy Synn reviews the collected discography of Desolate Shrine, including their brand new album Deliverance From the Godless Void, which will be released by Dark Descent on November 10.)

I’m sure, like me, a lot of you have bands in your collection who you absolutely love… but whom you got into surprisingly late. Desolate Shrine are one of those bands for me.

Heavier than granite, nastier than gangrene, and grimmer than the reaper himself, the Finnish three-piece (mainman L.L. handling all writing and instruments, with vocal duties shared by R.S. and M.T.) were always a band on my radar, but it wasn’t until the release of their third album, The Heart of the Netherworld, that I really took a vested interest in them… and then started kicking myself for waiting so long.

Thankfully I was quick to correct my error, snapping up a copy of both …Netherworld and its predecessor The Sanctum of Human Darkness soon after, and eventually grabbing hold of their debut, Tenebrous Towers, not long after that.

Now, with the band’s fourth album, Deliverance from the Godless Void, set for release on November 10th, this seemed like the perfect opportunity to spread the word about the band’s brutal, black-hearted brand of Blackened Death Metal. 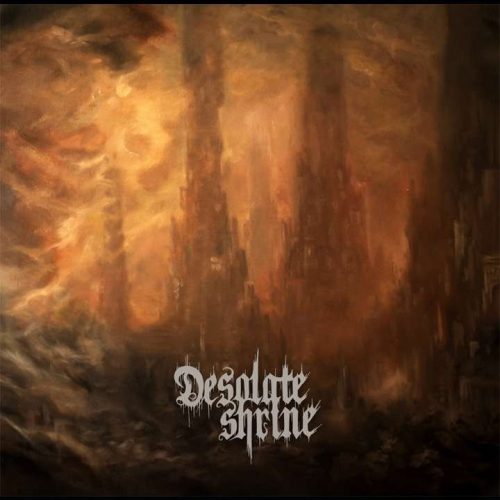 Desolate Shrine’s debut is easily their most primal and primitive work, with less of the glowering atmospherics that would come to infuse their later work and more of a (relatively) straightforward focus on jagged, chunky riffs, and staggeringly heavy, soul-crushing rhythms.

Opener “The Smell of Blood and Iron” is six minutes and fifteen seconds of bone-grinding guitars and demonic vocals that refuses to rest or relent in its attempt to overwhelm the listener with the sheer weight of its humongous riffery, while follow-up “No Place for a Human” continues down this same path… albeit with an even greater emphasis on ominous, oppressive intensity… only to kick things up a notch during its blistering, bludgeoning climax.

The album’s third track, “Crushing Darkness”, is precisely as dark and as crushing as its title implies, its roiling, doom-laden waves of distortion rolling over everything in its path with the irresistible momentum of a slow-motion avalanche. Scratch the surface however and you’ll find sickly strains of malignant melody infesting the track’s cold, black heart, ready to infiltrate and infect the unwary listener.

The brooding “The Brightest Night” finds the band erring more towards the doomier side of their repertoire, while also sewing haunting shadows of desolate, blackened melody throughout the track’s almost eight-and-a-half-minute run time, ultimately culminating in a bleakly beautiful finale, after which the aptly named “Chaos and Wrath” whips up a brutal barrage of tumultuous blastbeats and furious riffage.

With the heaving blackened Death/Doom of “Born to Lose One’s Way” the band presage the densely atmospheric direction which would come to dominate on later releases, piling on layer after layer of filth and grime as if shoveling dirt into an unmarked grave. And even when the track picks up the pace it still retains this almost overwhelming aura of suffocating horror, so that by the time the grim gallop of “Burning Devotion” hits, bringing the album to a barn-burning climax, there’s every chance you’ll already be curled up on the floor in a weeping, foetal ball. 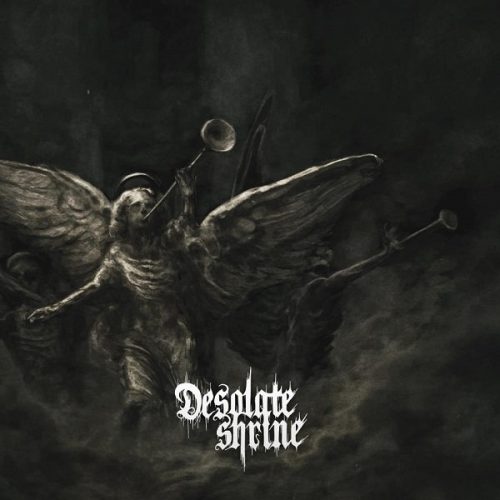 Album number two finds the Finnish filthmongers stepping up their game considerably, kicking off with the dreadful dirge that is “Corridor: Human Altar”, which in turn gives way to the dissonant, doom-laden assault of “Plane of Awake”, its grisly panoply of ear-grating riffs and pounding drums punctuated by the ragged, barely-human howls of R.S. and M.T., which rage and rumble like the screams of the damned.

The ferocious “Pillars of Salvation” has a real Dismember feel to it, careening along at a reckless, unstoppable pace, spewing riffs and blasts and venomous vocals from every barrel, while also showcasing a prominent Black Metal edge in its merciless deployment of searing, scything melody and gargantuan, gloom-stricken chords, eventually smashing full-pelt into the ravenous “Lair of Wolf and 1000 Lions”, a furious bombardment of ragged, rancorous vocals and crooked, rough-hewn riffs which contains some of the album’s most intense and extreme moments alongside some of its darkest and most atmospheric touches.

The suitably eerie interlude of “Old Man’s Visit” provides some momentary breathing space before the monstrous grooves and macabre melodies of “The Chalice of Flesh and Bone” descend upon you in a scouring deluge of chugging, gut-churning riffs and massive, malevolent hooks which, in turn, drag the listener into the metallic maelstrom of “Demon Heart”, whose gigantic, lumbering guitars seek to grind and pulverize your bones into dust for almost ten devastating, despair-filled minutes, before erupting into one final spasm of pure auditory chaos right at the end.

Climaxing in sickening style with the imposing dread and ineffable darkness of “Funeral Chamber”, a track that conjures the same abrasive, asphyxiating feeling as classic Bloodbath but which is, if anything, even more unforgiving in its approach, The Sanctum of Human Darkness proves to be yet another step on the band’s steady ascent towards Death Metal domination. 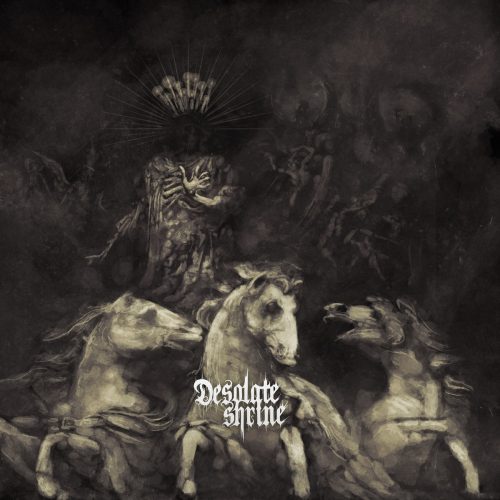 Darker than ever and brimming with an encroaching atmosphere of inchoate dread, the band’s third album ups the ante by coating every track with a shroud of baleful, malefic murk, which immediately manifests itself in the stifling atmospherics of the “For the Devil and His Angels”, before transforming into the insufferably heavy “Black Fires of God”, whose buzzsaw guitars and sledgehammer drums are so palpable, so punishing, that you can feel them resonating right down in the marrow of your bones. From its seething blastbeats and scorching riffs to its unholy ambient aura, “Black Fires…” offers absolutely no quarter, and takes no prisoners.

Track three, “Desolate Shrine”, is a morbid monolith of Blackened Death/Doom that fully deserves and fully lives up to its eponymous moniker, defining and distilling the very essence of the band’s sound in one grim and grandiose sweep, melding both atmosphere and aggression, dissonance and (dis)harmony, lurching rhythms and lethal velocity, while “Death In You” could easily pass for the mutant offspring of latter-day Marduk and classic Autopsy in all its gruesome grandeur.

Following the terrible, titanic strains of “We Dawn Anew” – fourteen minutes of doom and gloom and slow, creeping horror, interspersed with wild spasms of inhuman savagery and moments of cold introspection – the hypnotic “Leviathan” begins to unfurl itself slowly, but surely, its coiled riffs and writhing rhythms slithering down your spine in a fearsome display of venomous hooks and poisonous atmosphere, after which the album draws to a fittingly vile and virulent close with the blackened blast-furnace of its title track, almost thirteen minutes of necrotic, old-school riffage and unashamedly evil melody which doesn’t so much blur the lines between genres as it does obliterate them with impunity.

DELIVERANCE FROM THE GODLESS VOID – 2017

Album number four finds the Finnish furies leaning more heavily than ever on the Black Metal aspect of their sound, yet doing so without sacrificing an ounce of their deathly grit.

And though the production may be more powerful than ever, the band are still as foul and filthy at heart as they have always been, at times bringing to bear a crippling, Deathspell Omega sense of dissonance and discordance.

Putting the “fear” in “atmosphere”, the horror-inducing strains of “Lord of the Three Realms” mix dark, decaying chords and gnarly, guttural vocals with an underlying layer of sweetly seditious melody which steadily worms its way under your skin no matter how hard you try to resist, simultaneously punishing both body and soul (particularly during its brutal, blast-driven climax), after which the cataclysmic chords and pulsing, visceral rhythms of “Unmask the Face of False” don’t so much seek to infect you as they do immolate you in a slowly burning pyre of pitch-black flame.

Despite the ever-present coating of slime and grime, “The Waters of Man” features some of the most potent and precise playing on the entire album, its bulldozing riffs and strangling bass lines hacking and hammering away atop a fusillade of chattering blastbeats and rampaging kick-drums, all designed to leave you broken and vulnerable to the tender ministrations of “The Graeae”, which builds from a simmering intro of ghastly, skin-crawling anxiety into a looming leviathan of crushingly heavy riffs and nerve-scraping dissonance.

The band blaze through the whirling dervish that is “Demonic Evocation Prayer” as if possessed by some sinister primordial force, unleashing a corrupting cascade of pure chaos, interspersed with sudden moments of lucidity, before locking into the monstrous, chugging riffs and strychnine laced atmospherics of late-album highlight “The Silent Star”.

Ending with the blooming darkness that is “…Of Hell”, which sees the unholy trinity delving deep into foul, demonic atmospherics and ugly, abyssal vocals one last time, Deliverance from the Godless Void is another triumph of will and wickedness, and well worth getting hold of if you’ve ever had an urge for a truly masochistic metallic experience.