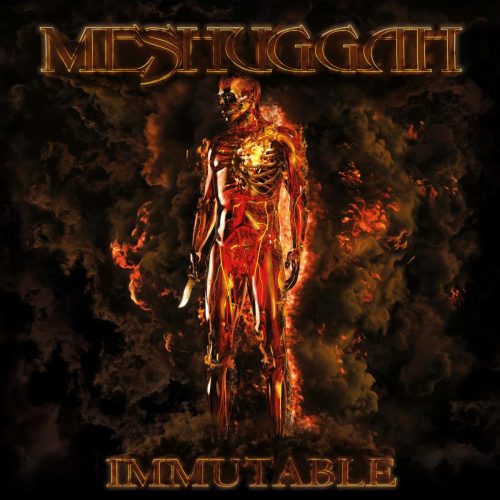 (Andy Synn goes big with the new album from the inimitable, immutable, Meshuggah, out this Friday)

As you may know, if you’ve been hanging around this site for any length of time, we don’t always bother to cover the big names and famous faces.

After all, the big dogs already tend to get more than their fair share of attention and acclaim – since  they’re usually the ones with the bigger budgets, the best PR reps, and the most backing – so any coverage we might add would just be a drop in the ocean, relatively speaking.

Plus there’s the fact that, after a certain point, these sorts of bands just become “too big to fail”. No matter what the critics say – most of whom, let’s be honest, don’t want to risk rocking the boat by saying anything negative anyway – their fans are pretty much always going to pre-order their new stuff, so we’d be much better off dedicating our efforts to where, and who, they can actually make a difference.

There are exceptions to this rule, however, and I’m making one today for the new album by Meshuggah.

Not because, as some have already written, it’s “the band’s best album yet” (it’s not) or “a major step in their evolution” (it’s really not… though there are certainly seeds of something…) but because it’s a perfect example of an album which deserves a fair and balanced appraisal but which, due to the impenetrable aura of hype which surrounds the band these days, is unlikely to get it. Immutable is, right from the start, an album divided, with the songs split relatively evenly between doomier and more atmospheric numbers like “Broken Cog”, “Light the Shortening Fuse”, and “Ligature Marks”, and more prototypical riff-driven ‘bangers such as “The Abysmal Eye”, “Phantoms”, and “God He Sees in Mirrors”.

It’s not a strict delineation by any means – even those tracks which find the band playing around with the use of moody melody and brooding negative space a bit more still possess a massive physical presence – but it does mean that Immutable is likely to be even more divisive than usual, especially among the band’s existing fanbase, depending on exactly what they’re looking for from a new Meshuggah album.

For myself, having now listened to this record on repeat for the last week or so, I’ve come to wonder whether or not there was some sort of creative tension within the band between those who wanted to explore a more overtly atmospheric approach and those who wanted to continue in a more stripped-down and straight-forward direction, with the result being an album which attempts to do both at the same time (which would also possibly explain just why it’s so damn long, clocking in at an unwieldy thirteen songs/sixty-seven minutes in length).

Of course, this is all just speculation, but it wouldn’t surprise me one bit to learn that the slightly divided nature of the album is a reflection of a similar divide amongst its creators.

None of this, however, makes Immutable a bad album, by any means. In fact, based on some of the intriguing and unexpected heights which some of these songs hit (the penultimate pairing of “The Faultless” and “Armies of the Preposterous” alone is almost worth sitting through the rest of the album for), I’d say it’s probably a step up from its predecessor overall, even if it could definitely do with a bit of trimming (cough, “Black Cathedral”, cough) and tightening up (though this has arguably been the case for almost every album since Chaosphere).

But there’s still a nagging sense that what we have here is something of a missed opportunity, as while no-one is going to be able to deny the sheer pneumatic power of songs like the crushing “Kaleidoscope” and “I Am That Thirst” (which I’m sure will be even more devastating live), some of the more stereotypical numbers feel like the band are operating a little on autopilot, and occasionally teeter right on the edge of outright self-plagiarism.

By contrast, however, it seems to me that the more immersive and introspective tracks – the ones which hint at, flirt with, and occasionally fully embrace, an even more atmosphere-heavy (as well as just plain heavy) approach – have more to offer, providing a slower but ultimately deeper burn, and perhaps hold the key to the next stage of the band’s evolution… if they’re willing to commit even more fully to this direction.

And there, perhaps, lies the crux of the issue. As while being immutable means that nothing and no-one else can change you (heck, where this band is concerned, on a good day no-one can even touch them) it also means that it’s difficult for you to change when you need to.

Of course, Meshuggah don’t really need to change. They’ve proven they can competently, and confidently, keep delivering the same punishing platter of groove-laden goods with consummate ease, and that people will keep on craving and consuming them no matter what.

But if they want to keep growing creatively, then they might just have to make some changes. Which leaves them with a choice to make. About whether to stay the course and stay as they are – untouchable, inviolable, immutable – or to allow themselves to transform into something new.

On the evidence presented here both paths are still open to them.

It just remains for us to see which one they choose.