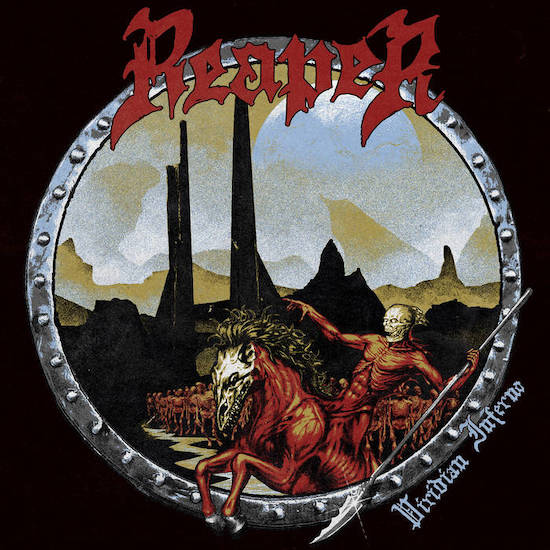 Metal-Archives lists 8 active bands from around the world who call themselves Reaper (plus a couple more Reapers that have split up and one that changed its name). The one we’re focusing on here is from Melbourne, Australia (not to be confused with the other Australian Reaper from New South Wales).

This Reaper released a blistering six-track self-titled demo in 2017 and have rocketed from that to a debut album named Viridian Inferno that’s now set for release on April 22nd by Dying Victims Productions. Doubling down on all things reaping, the band named the song we’re premiering today “The Reaper” (emphasis added). 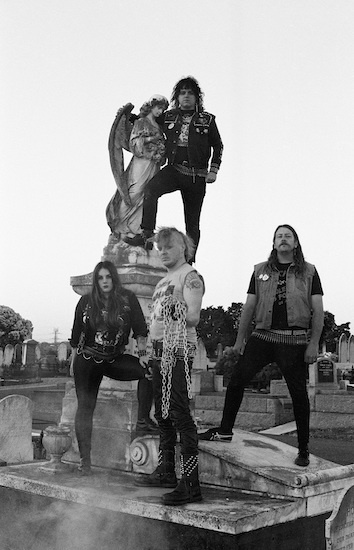 These three dudes and one lady wear their influences on their sleeves (and chains and bullet belts), devoting themselves to renditions of hyper-aggressive adrenaline-fueled savagery in the vein of early Celtic Frost, Hellhammer, Bathory, Discharge, Venon, Warfare, and Sacrilege. “The Reaper” provides a hellraising example of what they’re capable of.

Grisly and cruel at first, the band lay down cold and dirty chords over a lurching groove that slugs at your guts. Wolfish howls and panther screams underscore the nastiness, and there’s also something infernally supernatural about these primitive sounds.

But things get much more wild. The drums clatter and clobber, the guitars bray and boil, and the vocalist exhorts all the demons with berserk screams. The song takes off in a punk gallop as the riffing slashes and careens. A screaming solo and eerie keyboards push the music to further heights of diabolical frenzy. It’s a contagious romp, and will get your own pulse hammering.

Drawing on the band’s Australian setting, the press materials for Viridian Inferno make references to post-apocalyptic road warriors riding the wastelands aboard dirty high-powered engines, spikes set to impale and guns mounted for destruction. You listen to Reaper‘s feral amalgam of primal speedmetalpunk and that makes sense.

Dying Victims is releasing the album in variant LP vinyl editions with lots of other goodies, and on CD and digital formats. You can check out the options via the links below, and we’re also including streams of two other previously released songs, “Decay” and “Drop of the Blade“.