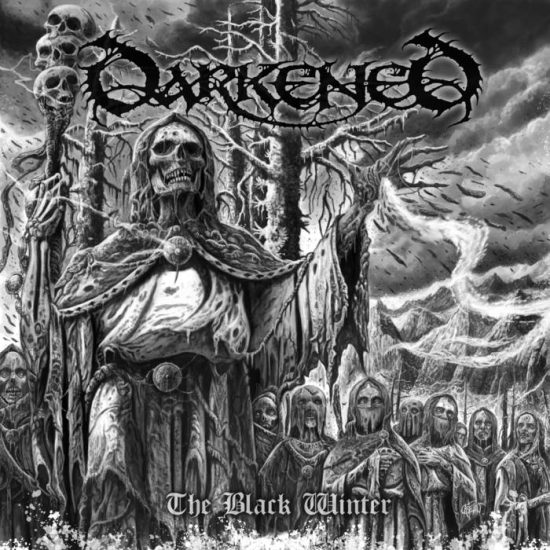 I’m sure some of you noticed that I didn’t post anything at NCS last weekend, neither a new-music roundup on Saturday nor a Shades of Black column on Sunday. I was in my hometown of Austin, Texas, which was only my second departure from Washington since the pandemic began (the other one being a trip to Iceland last fall for Ascension Festival).

No reason to go into details about that trip, other than to say that it was packed with activities that led to late nights and hungover mornings, and I had no time to write anything for this site. I did have a little time to myself on Friday afternoon and used that to check out some new songs and videos. From that I assembled a tentative collection for a Saturday roundup, and even though I couldn’t get that done, I decided to stick with the list for today.

I enjoyed the hell out of all these songs when I first heard them — my kind of ear candy. I hope you’ll have fun with them too.

This group of all-stars put out a hell of a debut album in 2020’s Kingdom of Decay, and early signs are that their new record will also be a rousing a success. 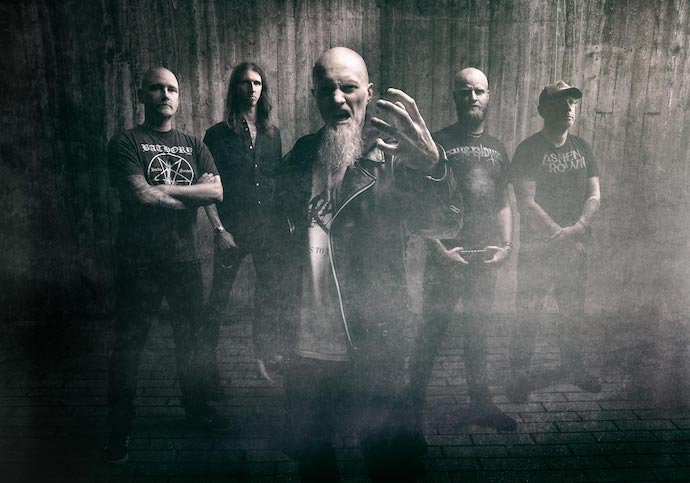 One song from the album, “Black Winter“, surfaced as a single last fall, and then re-surfaced as part of a two-track EP (Mourn the Dying Light) in early January, and now we’ve got a second track.

“Blood” is a crusher, with jackhammers going full-bore, and the growls are stupendous. As icing on the cake, the band mix in soaring, eerily magnificent melodies that sweep across the heavy chords and bludgeoning drums, and an exotic guitar solo that itself soars.

The album was mixed and mastered by the great Dan Swäno, and the cover art is the work of the great Juanjo Castellano. It will be released by Edged Circle Productions on May 27th. 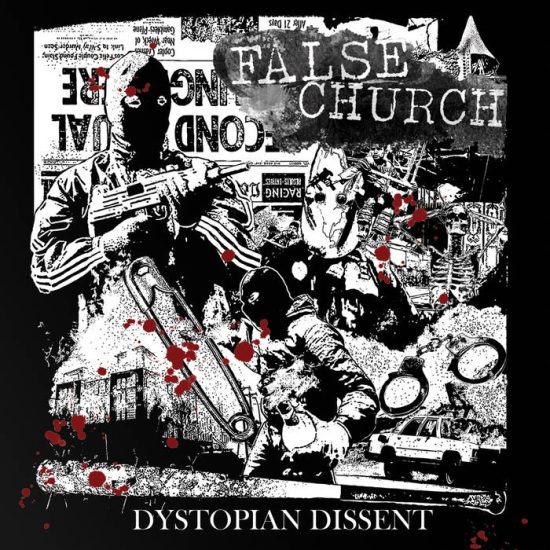 The next song by this D.C. band is a chainsawing bulldozer with the snare drum pumping like an overheated piston. The high, scraped-raw vocals are electrifying, and it’s damned tempting to yell along with them; the guitars bray and blaze; and just when you think the song can’t get any better, the band bring in a bruising mosh-worthy breakdown and then go nuts at the end.

The new album that includes this track is entitled Dystopian Dissent. It’s headed our way on April 22nd via HPGD Productions. 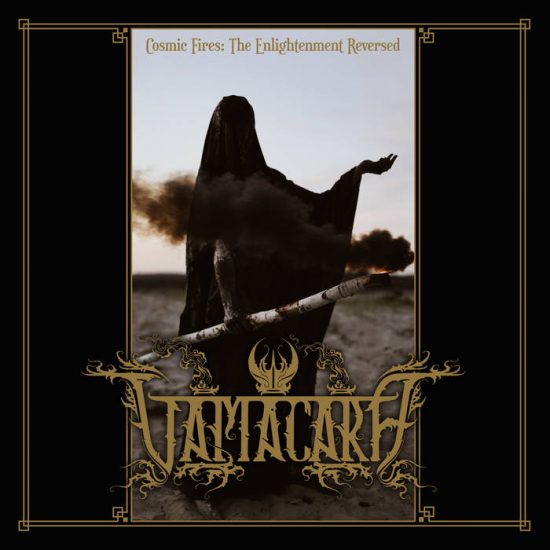 Next up is the first music video released by Vāmācāra, featuring the song “Alchemical Symbolism” from their new album Cosmic Fires: The Enlightenment Reversed (set for release on April 29th).

The very cool video is loaded with arcane imagery, and the genre-bending song itself creates an exotic occult atmosphere — but it’s also a fiendishly catchy and mind-bending thriller. (Thanks to eiterorm for linking me to this.) 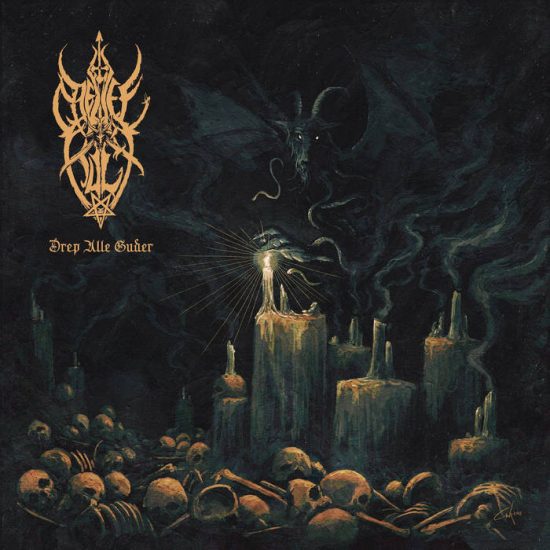 I saw that on Friday Soulseller Records simultaneously released three tracks from three forthcoming albums. I really didn’t intend to include music from three releases by the same label (people might think we’re on the payroll), but as I listened to each of them, one after the other, I couldn’t resist. This is the first one I heard.

“Voidwalker” is a pulse-punching, dervish-like whirl. The vocals are as vicious as rabid wolverines, but the song sounds like ecstasy — though it also becomes mystical and enthralling when it slows. Extravagant horn-like sounds in the mix make it even more dazzling, and the feverishly swirling guitars are magnetic, even as they begin to sound demented.

Djevelkult‘s new album is Drep Alle Guder, and Soulseller plans to release it on May 6. 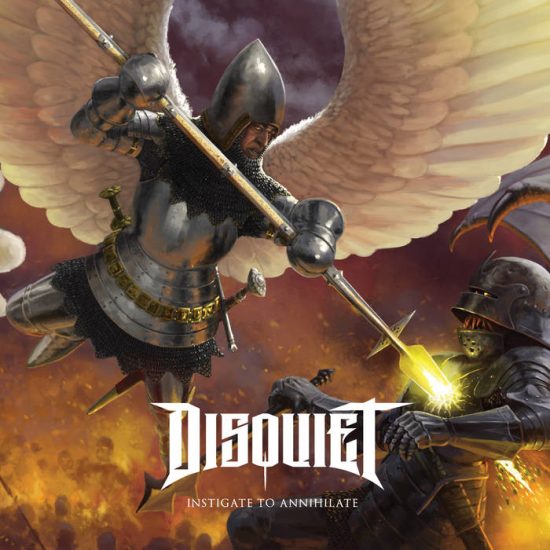 Next up are two tracks from this Dutch melodic thrash metal band’s new album, “Designed To Violate” and “Destroyance“.

The latter is a pulse-firing barn-burner that quickly becomes ridiculously catchy (in addition to giving your neck a good beating), and the gritty half-sung vocals are savagely wild, but there’s brazen and mesmerizing grandeur in the song as well, plus a darting solo that becomes an electrifying fret-melter and another one that’s just as scintillating.

I didn’t know how the band could top the glorious extravagance of “Destroyance”, but “Designed To Violate” is its equal. Laced with strands of exotic Arabian melody and outright singing in the chorus, it’s a hard-charger that’s just as capable of firing up your heart rate, but becomes eerily sinister as well.

The album, Instigate to Annihilate, will be released by Soulseller on May 6th. 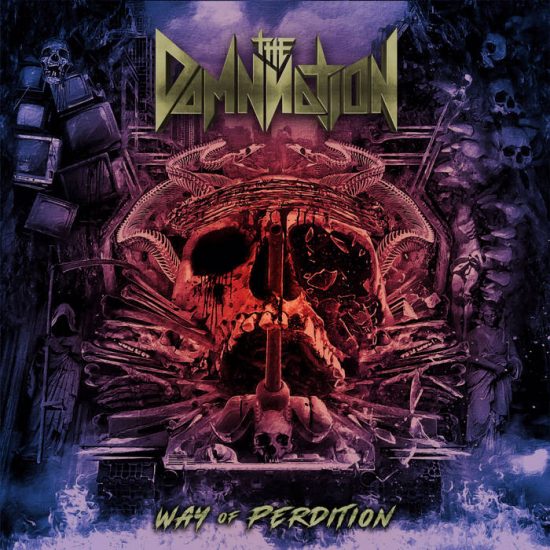 So far, every song in today’s collection has been infectious, and “Grief of Death” is another one. Although the opening riff is melodically bleak and menacing, its pulse is contagious, and the rumble of the bass and crack of the snare get their own hooks in a listener’s head (so does the soloing, even though there’s a feeling of bereft agony in those sounds). Meanwhile, the livid acid snarls of the vocals add to the feeling of menace.

These three Brazilian women quickly prove themselves to be astute songwriters, and the accompanying video gives you a chance to see them in action. The album is Way Of Perdition, and Soulseller has scheduled it for a May 6 release. 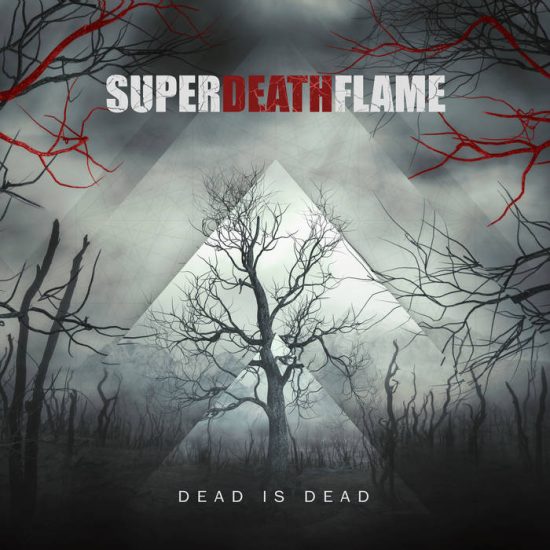 To close, I’ve picked just one song from this Finnish band’s second album Dead Is Dead (their first full-length in more than a decade), which Inverse Records released last Friday. The song, “Dying Embers“, is the one set to play first at the album’s Bandcamp page, and it’s easy to understand why.

This song is just pure ear candy, a mix of slugging propulsion, sweeping and swirling sky-high keyboard melodies, singing that goes sky high too (trading off with bestial growls), and occasional flickering electronics. I know we generally frown upon singing around here, but the clean-sung melody in this track is a towering hook.

If you dig this spectacle, by all means let the player continue to run, because there’s a lot more where that came from.