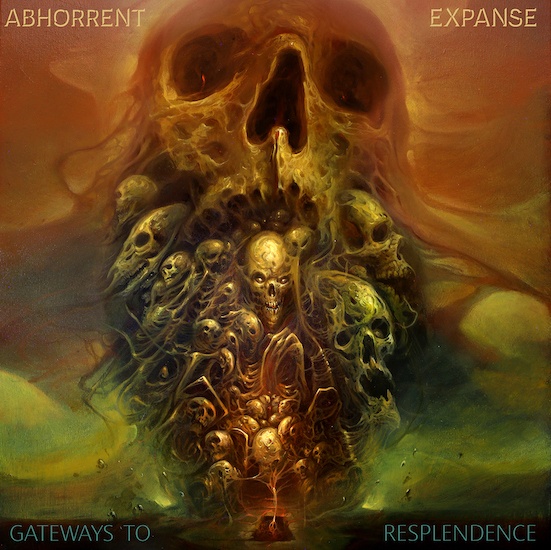 I confess that when I first read that all 10 tracks on the debut album of Abhorrent Expanse were improvised live, my reaction was one of “uh oh” anxiety mixed with intrigue. Improvisational music of any genre tends to be a mixed bag, but improvisational death metal? Maybe even riskier than usual.

On the other hand, the fact that this band’s members hail from such groups as Zebulon Pike, Celestiial, Obsequiae, and more, well that’s what kindled the intrigue, and even a rising feeling of optimism.

So what won out in the end? The pessimism born of being subjected to other unsuccessful experiments that proved to be un-entertaining exercises in musician self-indulgence? Or the intriguing hope that Gateways To Resplendence might live up to its name?

I suppose the answer is evident from the fact that you’re now reading this, and are about to have a chance to listen to all 10 tracks at this site before the album’s April 8 release through Amalgam Music and Lurker Bias. Why did the optimism prove to be justified? Read on…. 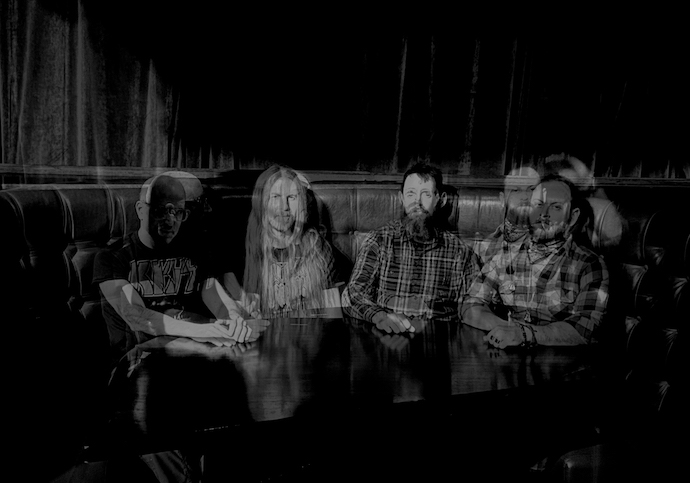 One conclusion might be that talent shines through even when it’s challenged, or maybe that a challenge causes the talent to shine brighter. Another conclusion might be that improvisation is capable of bringing adventurous surprises which forms of practiced and pre-organized music don’t, but that the success of the experience depends on the existence of enough of a hive mind at work among the performers that they can still connect and follow each other as each one goes off on their own tangent.

In the case of Gateways To Resplendence, there are indeed surprises galore — many of them terrifying and mentally up-ending.

For example, the opening number “Cloak of Ancients” is chilling and unearthly in its amalgam of abrasive and demented tonalities, which makes the explosiveness of “Annihilation Operators” even more startling. There is when Abhorrent Expanse reveal the daunting savagery of which they’re capable, unleashing a storm of maniacally hurtling drums, magma-like bass bubbling, hideous roars and screams, and a dense cascade of mind-mutilating fretwork.

There too is when you begin to realize that the music’s improvisational qualities lend themselves very well to creating an aura of madness. To be sure, it’s fascinating to listen to the quivering, darting, and buzzing guitars, the sharply veering drum cadences, and the varying hums and throbs of the bass, but it also really does sound insane.

The band do lock into some compelling rhythmic grooves, to give the guitars a chance to cavort in the spotlight, and they pull off lots of changes in volume and tempo, all the better to keep you perched on the edge of your seat, eagerly anticipating what’s coming next (even though you can’t guess what that will be). 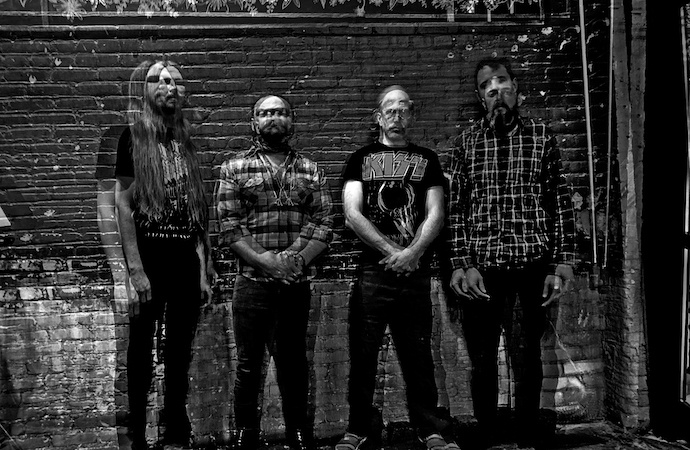 There must have been some direction that we can’t hear in the recording. How else would the band know to deliver the sprightly and noodling notes and the weird percussive effects in “Empirical Languages”? However it happened, it’s a well-placed bit of strangeness after the mind-bending barrage of “Annihilation Operators”, and the oddities continue in “Frost Suffocation”, which includes both violent instrumental spasms and soft, jazz-influenced permutations as well as episodes of off-planet mystery where you won’t need your tin-foil hats to pick up the transmissions.

The band must have had a big armory of instruments and effects to pull off this album, as well as mental access to a cornucopia of musical stylings. The credits list acoustic as well as electric guitars, acoustic as well as electric bass, plus organ and synths, and there’s no telling how many objects were struck to create the percussive sounds. From that listing alone, you can deduce that a lot of what happens here (including in the mercurial and mesmerizing title track) isn’t close to extreme metal and is instead (as that track demonstrates) folky and jazzy and downright trippy.

Discord and destruction do lie in wait as well, as you’ll find in “Path of Extremal Action”, which sounds like the audio equivalent of an asylum inmate over in a corner pulling the wings off flies, until the craziness becomes an upheaval. The wing-pulling continues in “Invasive Insectoid Horror Thoughts”, which uses silence as much as unprovoked instrumental lunacy. “Baleful Reminders” is a beguiling dream, except when it becomes a growling bone-gnawer. 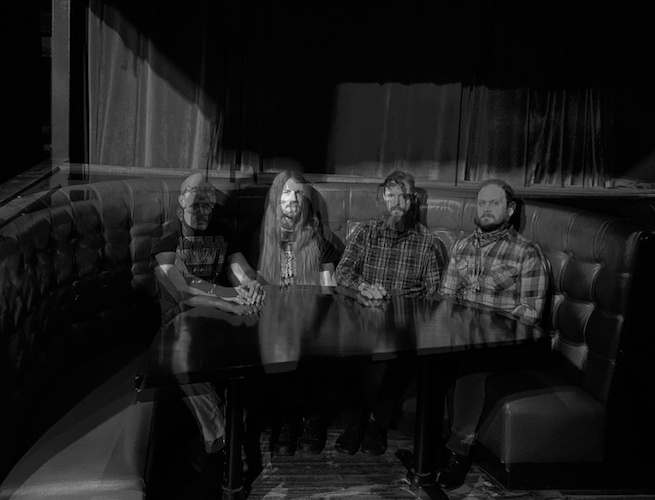 The longest title is the penultimate “Against The Churning Void, Apparitions Of A Lost And Glorious Starscape”, which carries forward the celestial and jazzy dreaminess of “Baleful Reminders”, but gradually turns the dream in disturbingly menacing and macabre directions, perhaps as a prelude to “Arcturian Nano Diamonds From The Tranquil Abyss”, the uber-long closer whose extraterrestrial maneuvers actually sound like its title — except that the high-pitched frenzies and subterranean rumblings of some of the instrumentation create a hellscape of fear, culminating in a paroxysm of violence.

Well, it turns out that death metal is only one of the ingredients in this madness. You could also pick out strands of black metal, funeral doom, noise, and of course free jazz. The musicians challenged themselves; their music will challenge you. But it’s a challenge well worth taking if your tastes include appetites for things adventurous, and things mad.

Bassist Brian tells us how this came to pass:

The initial idea for this group goes back to my first time playing with Luke and Tim in 2013. After a series of duo and trio gigs over the years, the four of us were finally able to converge in Minneapolis in the fall of 2020. It took another year and a half (to the day!) to get all the necessary pieces in place. This is easily one of the most challenging and rewarding projects I’ve ever been a part of. I’m very proud of how the record turned out and can’t wait to share our beautiful abomination with the world!

Gateways To Resplendence will see release on CD and digitally through Amalgam Music and a limited run of 50 tapes via Lurker Bias on April 8th. Pre-order via the links below. And for extra fun we’ve also included videos for two of the tracks.