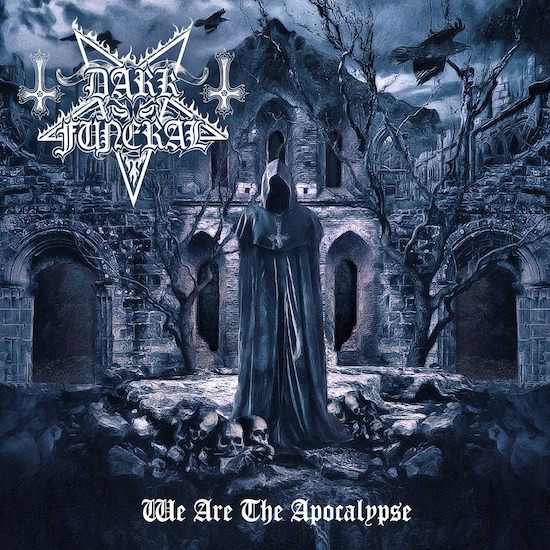 (On March 18th Century Media released a new album by Dark Funeral, and today DGR gives it a review.)

Again, I preface this every time by saying I am not the black metal expert on this site. This is just one of those releases where it’s fun to check in on a more established band and find out that yes, in fact, they do still have “it”.

Let us tell you a tale of an album in Swedish black metal group Dark Funeral‘s discography. It is nine songs long, about forty-five minutes in length, and has cover art that’s almost entirely blue-dominated. It’s hard to overstate just how much it seems like 2016’s Where Shadows Forever Reign has become the nucleus for Dark Funeral as they exist currently. Credit to them of course; they’ve had a constantly shifting lineup throughout the years, so much so that Dark Funeral releases rarely share the same lineup between them.

WIth Lord Ahriman being the sole constant, people rotate in and people rotate out, yet Dark Funeral somehow keep chugging along with a new album every six-or-so years. You don’t get to do something like that musically unless you’ve remained remarkably steadfast in your sound, which brings us to Dark Funeral‘s newest release, 2022’s We Are The Apocalypse. 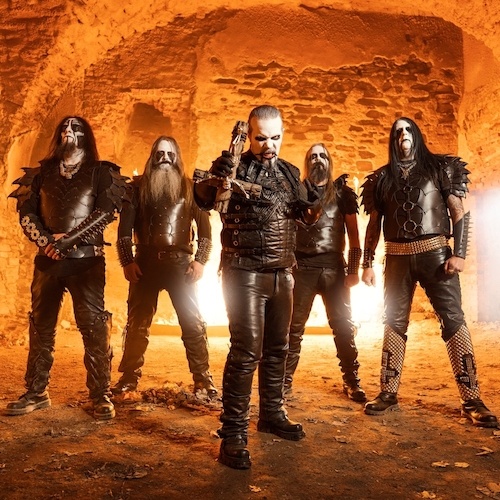 Surprisingly, the lineup hasn’t changed too much since the last album, which means that you’ll recognize a fair bit of what is happening on We Are The Apocalypse from the get-go, especially if you had any experience with Where Shadows Forever Reign. It seems that in celebration of the lineup remaining largely the same between releases, Dark Funeral decided to keep the formula the same as well – resulting in another nine-song, near forty-five minute, and blue-dominated cover art release.

We have looped back around with Dark Funeral, so even though we’re having fun at the group’s expense, when it comes to them doing what they do best for an album, there’s still an undeniable comfort-food approach when it comes to the band. They’re dangerously good as riff-writers so even though they’re at their best when they’re an infernal blastfest – see songs like “We Are The Apocalypse”, “A Beast To Praise”, “When Our Vengeance Is Done”, and “Beyond The Grave” for instance – there’s always going to be some sort of musical fish hook within each song that is going to find its way into your skin and be a motherfucker and a half to pull out.

This is so much a continuation of what the Dark Funeral crew were doing on Where Shadows Forever Reign that you almost wouldn’t notice the near six-year gap between the two releases were you to just run them back to back. They’d feel almost like a double album. We Are The Apocalypse is a little moodier at times, a little more settled in its ways vs Where Shadows Forever Reign and how scrappy it could get at times, but these are all minor deviations from the Dark Funeral core, which at this point has become a very melodically minded black metal pillar. You will absolutely get your fair share of blasphemy and Satan throughout, with vocalist Heljarmadr placed well in the forefront to howl away every chance presented, but blasphemy and Satan can also write one hell of a guitar lead here.

“Moody?” We can hear you saying, “This is big, fiery music, where the hell does moodiness come into play?”. That’s a fair approach as well because when you consider Dark Funeral as a whole, they’ve been very good at shooting right for the center of the black metal style. They absorb a lot but they have a very well laid out blueprint that they follow – especially considering the band are seven albums deep into a lengthy career at this point – that usually results in these massive, scorched-earth, everything-left-in-ruins style songs.

Which is why it seems like there is a lot of interest in a song like “When I’m Gone”. It’s a slower piece, and even though it’s still recognizably black metal down to the genre-trappings, Dark Funeral‘s ruminations on death and dying allows for the band to write a lurcher of a song in comparison to the rest of the album. “When I’m Gone” is a song of big bass drum, big tom hits, and huge cymbal crashes versus the usual death by snare drum assault. It’s probably why follower “Beyond The Grave” hits so hard right afterward, even if it veers strangely enough into sounding like an alternate-universe take on Cattle Decapitation‘s “Bring Back The Plague” during the song’s intro-segment before it darts off into its own napalm-slathered hauntings.

It was a smart choice for the band to close on the titular “We Are The Apocalypse” song because that one ties off the previous preceedings rather nicely. It’s the most Dark Funeral song the band seem capable of writing and it has all of the hallmarks — it comes at you fast and knocks you over with the force of an out-of-control vehicle. When the band portray themselves as a pillaging horde leaving nothing but waste behind them, “We Are The Apocalypse” is the sort of song you’d imagine them putting out, and in many ways it summarizes the album as a whole. It allows the band to just let loose for four and a half minutes with no pretense whatsoever.

That’s probably the most healthy approach for the album as well because each song stands on its own here. Dark Funeral don’t shift too much from the pillar that they erected before this. If you enjoyed what this lineup got up to on Where Shadows Forever Reign, We Are The Apocalypse is going to have instant appeal. If you’re new to the band – because every disc is someone’s first somewhere – then this is just as good a starting point as the last three.

Dark Funeral are a good “go-to” for an angry mood, and sometimes you just want to hear a group proclaiming how they’re going to set the world aflame for about forty minutes. We Are The Apocalypse is exactly as apocalyptic as you’d expect it to be, because if nothing else, Dark Funeral are damn good at meeting the requirements for what the album title proclaims.