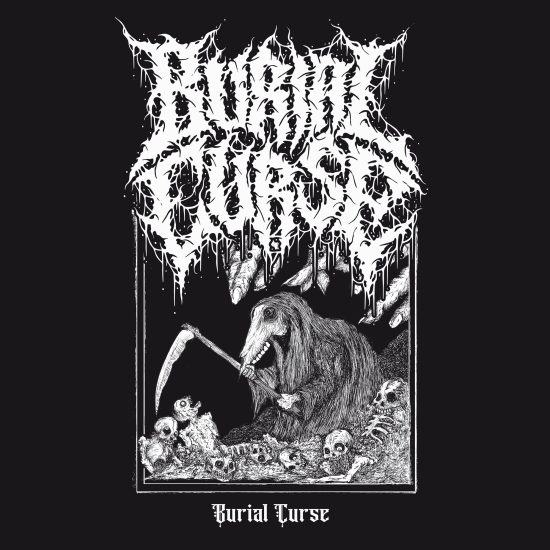 The well-educated among you may say, “How is this a premiere? That Burial Curse EP came out in June 2021!” And so it did, both digitally and in a very limited run of tapes via Famine Records.

But the beast that was that EP refused to slink away into silence and instead continued to snarl and roar in such violating fashion that Dawnbreed Records picked it up for a reissue that will happen on April 8th in multiple formats. Not only that, the EP has had an upgrade in sound, thanks to a new mix and master by Alex from Obscured By Evil Productions.

So if you haven’t heard the EP before now, it’s a good time to discover it. And if you have heard it, you might now hear it in a way you haven’t before. 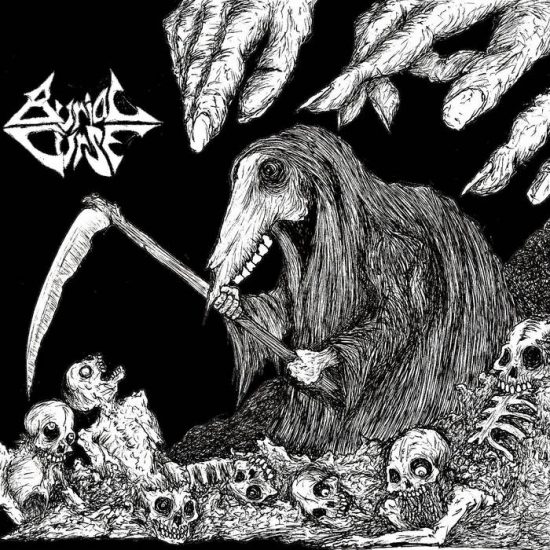 “Putrid blackened death metal” is the name of this game, heartily recommended for fans of such ruiners as Portal, Impetuous Ritual, Incantation, and Malthusian. The band’s vile mission is clear enough from the sounds themselves, but guitarist/bassist/shrieker Nick Turner states it plainly:

After working on a variety of extremely technical and difficult albums, I wanted to create something that was simple, evil, brutal, and old school. Drawing from all manner of influences from war metal, doom, black, and death, I basically just wanted it to sound like some disgusting forgotten demo unearthed from the depths. I put a lot less emphasis on actual riffs and melody and a lot more emphasis on atmosphere and disgust.

I laid down the guitar and bass and then just laid down some completely freeform screech vocals at the end of the process. I purposely used a 200 dollar acrylic Flying V I outfitted with Seymour Duncan black winters to give it a cold and dead sound.

Joining him in the creation of this monstrosity was Jared Moran (drums, guttural vocals, art). Together they generated five tracks that are a mix of noxious regurgitations and decimating shrapnel storms, all of it swathed in a horrifying other-dimensional atmosphere.

The EP opens in chilling but seductive fashion with the astral ambient tones that form the advance of “Vomiting Violence”, which then introduces listeners to the dismal, miasma-like riffing that the band use to churn and chill the senses, and to both the rapidly veering drumwork and the utter eeriness of the guitar leads.

The music in that opener heaves and harrows in equal measure, creating sounds of suffocating rot and feverish disease. It crawls, claws, stomps, explodes in spasms of maniacal frenzy, and rises up like a towering black monolith of hideous grandeur. Weird anti-melodies spurt and spiral upward, while grotesque gutturals roar in the low end and cauterizing shrieks strike like ice-picks to the ears.

That first track, all by itself, establishes that although Burial Curse chose to plant their flag in well-worn genre ground, they nevertheless have the power to formidably seize attention. Having done that, they don’t release their grip. The remaining tracks continue creating a labyrinth of changing horrors, slowing and accelerating with abandon, chewing the listener’s guts with turgid and abrasive riffage, erupting in convulsions of sheer snare-drum insanity and fretwork mayhem, and continually threading everything with truly nightmarish accents.

Burial Curse deploy iron-toed boots too, which go after your kneecaps and then continue to mercilessly kick you even after you’ve gone down. Which is to say there are some punishing grooves in these changing manifestations of supernatural dread and paranormal terror.

One wonders what further monstrosities these two mad scientists may be creating now. One hopes that they are. In the meantime, we can again revel in the fiendishly startling creations housed within this nearly half-hour EP.

Dawnbreed Records is re-issuing Burial Curse on CD, cassette tape, and digital formats on April 8th, and a 12″ vinyl edition will follow later in 2022. For more info, check the link below.