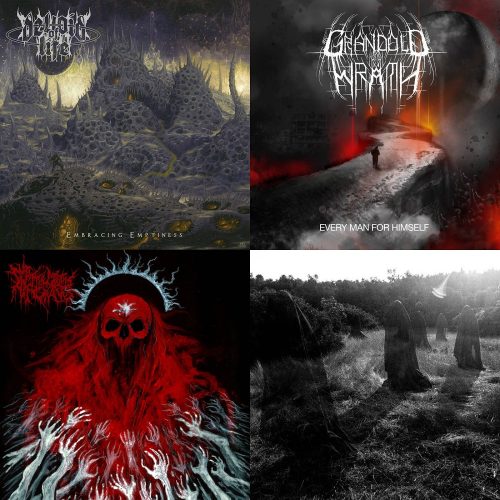 March of 2022 certainly seemed to be a busy month for new releases, that’s for sure.

But, then, aren’t they all?

What I think made last month feel like a particularly packed one, however, is the fact that the last week or so was especially stacked with new albums – quite a few of which came as complete surprises to me – that it made the whole thing seem that much more overwhelming.

Obviously, of course, I won’t be able to cover all – or even a significant fraction – of them here in today’s article but I still think you’ll be pleased with what I’ve chosen to highlight (and I may or may not have also slipped one from last month into tomorrow’s piece too) as what I’m about to present you with is four different flavours of deathly delights drawn from across the Death Metal spectrum, most, if not all, of which will likely be totally new to a lot of you.

So let’s not waste any more time, shall we?

Norwegian trio Devoid of Life don’t seem to want to waste any time with their first album, Embracing Emptiness – possibly because it’s already taken them six years to reach this point following the release of their debut EP – because, after a short, sinister (and surprisingly effective) intro, “Succumbed to Misantrophy” [sic] kicks into high gear almost immediately in a barrage of blistering Blackened Death Metal riffage and hammering, blasting drums.

With a sound that sits neatly between the imperious intensity of Hour Of Penance, the proggy technicality of Horrendous, and the menacing atmosphere of Sulphur Aeon – while also showcasing a penchant for slippery song structures and prominent bass-lines similar to their long-absent countrymen in Execration – these young whippersnappers clearly know that when you’re not playing (or even pretending to play) something wholly unique, then it’s all about the guts and the gusto you display, and the verve and vitality of your delivery.

And these are two areas where it’s absolutely impossible to fault Devoid of Life, because they have clearly poured absolutely every single ounce of blood, sweat, and tears they possess into these ten tracks, resulting in an album that feels fresh and vital despite its use of many familiar ingredients.

Sure, it perhaps overstays its welcome ever so slightly (lose both “It Never Ends” and instrumental outro “A Headless Hunter” and you’d be left with a stronger and more streamlined album), but it also swings for the fences and connects more often than not, showcasing both a keen grasp of depth and dynamic – running the gamut from majestic blast-a-thons like “Deprivation of All” to coiled crushers like “Brutality Reigns” to outlandish epics like “The Grimness of Mortal Depravity” (which really should have been the closer) – and an impressively agile and organic delivery (especially when it comes to the lithe, sinuous bass work of Emil Bringsli) over the course of a little under an hour of music.

A phenomenal, if flawed, opening statement from a band who are, mark my words, going to be ones to watch in the years to come if they stick to the path they’re on now.

GRAND OLD WRATH – EVERY MAN FOR HIMSELF

German quintet Grand Old Wrath may have taken five years to write their full-length debut, Every Man For Himself, after releasing their first EP back in 2017, but thankfully they’re quick to demonstrate that all the waiting has been more than worth it with the high-tech rollercoaster of riffs ‘n’ rhythms that is opener “Alien Grinder”.

While their first EP shared more than a few strands of DNA with some of the scene’s more unconventional icons such as Gorod and Hieronymus Bosch (the latter similarity and/or influence continuing to be particularly prominent on Every Man For Himself, especially on funky, fret-bending numbers like “Prime Delivery” and “Hallucinogenic”, which are just as likely to have you shaking your hips as banging your head), there’s clearly been a shift towards a more Archspire-inspired – or, at least, Archspire–adjacent – approach this time around.

This is most notable during the speedy, staccato attack of the aforementioned “Alien Grinder”, as well as in the undulating melodies and unexpectedly hooky riffs of “Odium Doctrine” (inarguably, in my opinion, the album’s best track) and the absolutely massive chorus of unashamedly catchy closer “Erasing Degeneration”, but in truth the fingerprints of Canada’s finest/fastest sons are scattered throughout all of these eight tracks.

They’re not quite on the same level yet, of course – this album is more The Lucid Collective than Relentless Mutation, albeit with a little less velocity and a little more melodic versatility – and the vocals could do with finding a little bit more of an “x-factor” to make them truly stand out, but all in all this is a big step in the right direction from Grand Old Wrath, a band still absolutely packed with untapped and unrealised potential.

OUT OF THE MOUTH OF GRAVES – HARBINGER UNCEREMONIOUS

So far we’ve had some pretty blistering Blackened Death and some instrumentally-agile Tech Death, so now it’s time for something a little bit nastier and “out there” in the shape of Harbinger Unceremonious by US trio Out of the Mouth of Graves.

The band’s debut album is just over twenty-five minutes of murky riffs, malevolent lead “melodies” (using the term loosely) and whirling, dervish-like drum work (courtesy of seemingly ubiquitous uber-sticksman Jared Moran) which shows a gleeful disregard for both its listeners and for the common conventions of Death Metal, preferring instead to pull and tug at the seams of the genre in order to feast on whatever leaks out.

It’s true that, on the surface, that twenty-five minute run-time might seem like a bit of a cop-out, but it turns out that it’s exactly the right sort of length for something this contorted and confrontational, as attempting to stretch it any further would likely have snapped the tenuous threads just barely holding it together entirely.

As gnarled and gnarly as it may be – the insanity-inducing strains of “Hallucinations, Morphine Phantasms”, which at times sound like some sort of unholy amalgam of Gigan and Teitanblood, are a prime example of the disturbing and discordant depths this album can reach – that’s not to say that Harbinger Unceremonious is totally without form or structure, however.

True, much of the music seems to possess an impromptu, almost improvisational aura to it (to the point where it frequently seems as though the three members of the band are playing three entirely different things that just happen to share a similar timing and tempo) but there are also moments where the cacophony of chaos suddenly resolves itself into a distinctive and terrifying form (such as the sickening passages of ungodly groove which manifest during “Herald of the Tempest”, or the baleful, bad trip vibes of “Worship Cyclopean Monolith”, for example) which proves that there’s at least some sort of method behind the band’s bilious metallic madness.

It’s not an easy listen, by any means, but it undoubtedly a fascinating one, and there’s a good chance, if you’re a certain type of person, that by the time claustrophobic closer “The Void Enveloping” finally collapses in on itself you’re going to feel strangely compelled to play it again. And again. And again…

Epiales may be the second album from Greek/American duo Phasma, but for all intents and purposes it might as well be their first, as not only is it a huge step up from their debut in practically every way, but the entire tone of the band is different – darker, moodier, and somehow even heavier – this time around, making this feel less like a sophomore release and more like a total rebirth for the group.

With a sound that straddles the divide between Deathcore, Death Metal, and Tech Death, the band’s sound is somewhat reminiscent of another dynamic duo we’ve covered here, Canada’s Gomorrah, albeit with a little less proggy technicality and a little more Deathcore and/or Aborted influence instead.

What this means is that some of you are going to absolutely love this… especially once the largely superfluous intro fades out and “Garden of the Crucified Nazarenes” hits you full in the face with its humongous, hook-heavy riffs, neck-wrecking grooves, and almost unrelenting percussive power… and some of you are probably going to hate it for being a little too ‘core in places.

Give it a chance, however, and you’ll discover that it’s not all just blasts and bombast (though there’s plenty of that to go around), as it’s actually some of the more melodic and atmospheric parts – the sinister, sinuous mid-section of “Garden…”, the juxtaposition of brooding ambience and bull-necked riffage part-way through “Feast in the Temple of Ghluun”, the doomy, dramatic finale of “Malebolge”, etc – which really make this album “pop” and help add an extra layer of dynamism to the music.

It’s not perfect, by any means (one or two of the songs simply don’t do enough to stand out from the crowd, though they’re still solid) but when it’s good it’s very good indeed, especially during the album’s final stretch, which includes the ambitiously dynamic “Epiales Part I: The Birthing Crypt” and its more stripped-down and straight-forward companion, “Epiales Part II: Metamorphosis”, and culminates in the absolutely fantastic “The Hymns of Novus Christos” (essentially the apotheosis of everything the band has created on this record).

So why not give it a try? I think you’ll be impressed by what a massive and intricately arranged sound these two gentlemen have created for themselves.

3 Responses to “THINGS YOU MAY HAVE MISSED (BUT SHOULDN’T)”