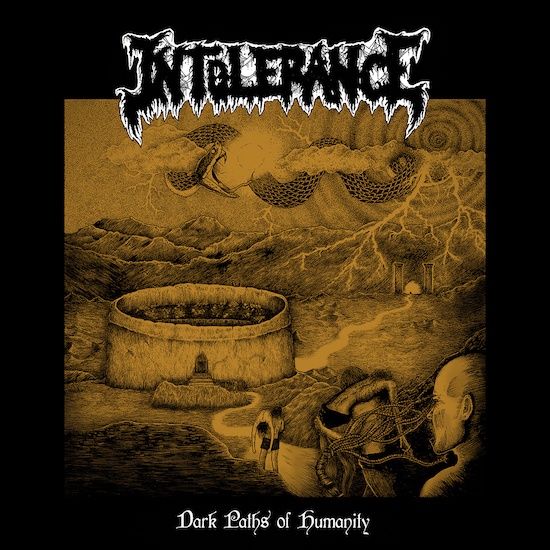 Although we have no special insight into why this Spanish death metal band chose Intolerance for their name, we might guess from the music that they have no tolerance for weakness or mercy, nor for the manifold failures of humanity. Instead, their rank and rabid revels seem fueled by revulsion and rage. They see with clear eyes the Dark Paths of Humanity, and have so named their forthcoming debut album.

To be fair, the past for them is not a total graveyard of degradation and disappointment. They follow an inspirational beacon lit in the late ’80s and early ’90s by such bands as Bolt Thrower, Grave, Asphyx, Morgoth, Entombed, Convulse, Obituary, and Unleashed. That’s a broad swath of music from a now-hallowed age, and somehow Intolerance pay homage to all of it in crafting music that’s grimy and gritty, morbid and malicious, creeping and crazed.

In other words, they damned well know what they’re doing, and they do it damned well — as you’ll discover through the song we’re premiering today, which proclaims “Death Before Slavery“. 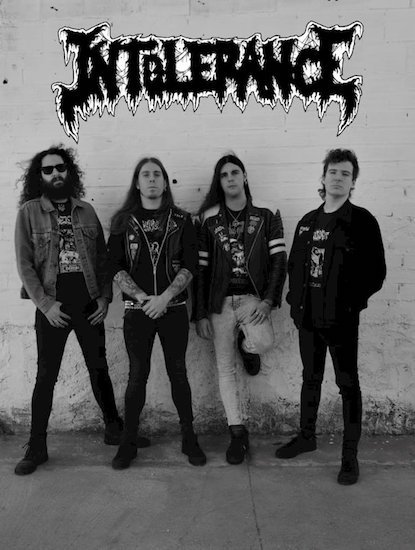 In this new song imperious growls echo above a boiling mass of riffage, whose mind-mangling chords also become imperious in their blaring and slashing savagery. While volcanic fretwork-chaos runs rampant, the snare drum methodically snaps and the bass groans, keeping the momentum on a measured course and contrasting with the violent mayhem that surrounds the rhythm section.

There comes a point when the convulsions subside, but only to make way for a guitar solo that slithers in misery. With a truly spine-tingling scream leading the way, the tremolo’d riffing begins to churn again, and the drumming convulses, culminating in one last blast of tyrannical barbarism. Prepare to get your adrenaline amped up, and press play:

Dark Paths of Humanity is getting a worthy release by a triumvirate of labels. Memento Mori will release the CD version on April 25th; Godz ov War will release the tape version on May 13th; and the vinyl version will follow later from Fucking Kill Records.

The fittingly macabre and supernatural cover art was created by CL Artworks, and the masterful Javier Felez mastered it at his Moontower Studios.

We’ve included lots of links below, as well as a stream of the previously released track “Embodiment of Chaos“, a song in which dismal and desperate moods shroud a punishing and increasingly savage and exhilarating death metal assault.

No Responses to “AN NCS PREMIERE: INTOLERANCE — “DEATH BEFORE SLAVERY””