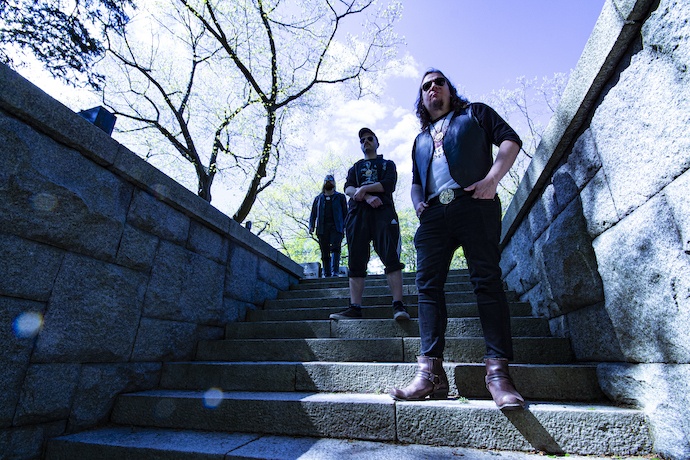 (In this new interview Comrade Aleks re-connected with Count Karnstein, frontman of the Finnish doom metal band Cardinals Folly, whose latest release is a split album that came out last month.)

I was sure that we did an interview with Cardinals Folly not that long ago, but I’ve checked and found – it was in 2015! So, in case you forgot, let me introduce them.

These blasphemous fidgets of doom from Helsinki have done their dirty black magic since 2007 (or 2004 if we take into account The Coven period) and truly succeed! Their first album Such Power Is Dangerous! (2011) and the following Our Cult Continues! (2014) were good examples of honest and traditional doom metal. There were a few hooks and a bunch of nice songs but I think that Cardinals Folly finally reached their own identity with Holocaust of Ecstasy & Freedom (2016).

The hard and boiling stuff of Deranged Pagan Sons (2017) was a natural development towards more savage and faster music, and Defying the Righteous Way (2020) was my album of the year if you prefer such categories. The band keep to their mark as an active and battleworthy outfit, and this time they’ve returnedd with a split-album with the American band Purification.

Count Karnstein (also known as Mikko Kääriäinen) found some time to tell us a few past and future secrets of Cardinals Folly! 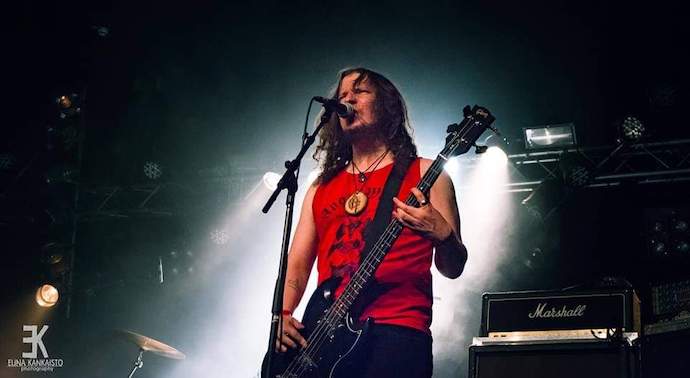 Hi Mikko! How are you? What’s going on in Cardinals Folly’s dirty lair?

Uh. I’m fine, glowing like a jewel amongst all the shit in the world today. Just made a bunch of kids chant “Hail Satan!” in a show we played last weekend in Tampere, so that made me feel accomplished. We just played a few local shows in Finland, and Germany and Lithuania last December. The new split with Purification is out, some more shows are being booked to Belgium, Germany, Italy… riding our wave of destruction, as always… and we also have some killer heavy metal songs for our next full-length. So all good.

It seems you’re a busy man — do you try to save Finnish doom metal? Make it great again, you know?

Saving Finnish doom metal? You’d be better off trying to save all rainforests alone. There’s no such thing as Finnish doom metal. Only a bunch of bands who wanted to have a bit of fun for whatever obscure reason. Or maybe thought that the path would be easier. This is also why it’s a smart move for us to move towards faster and faster metal – it fits our attitude much, much better.

Doom metal musicians always say that doom stays hidden, but above all it’s because of their own attitude and personality. This is what no one says straight, because it doesn’t make them look good. In the nowadays scene it’s mostly about trying to look good on the internet, praising yourself as a grandmaster of doom metal after putting out one album and doing two gigs. And now, after sitting at home due to covid for two years, who the hell is gonna even try? No, my friend. Finnish Doom metal will stay dead. But Cardinals Folly will LIVE! 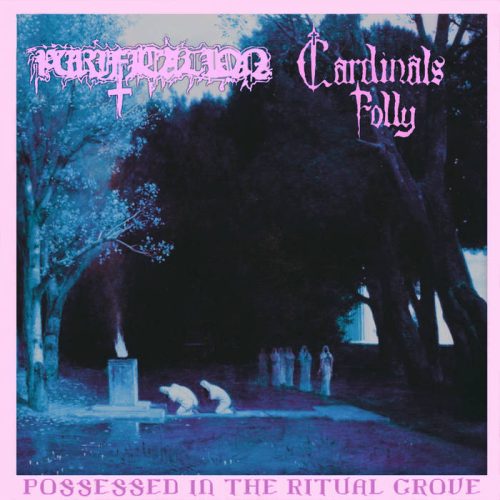 Rafchild Records released the Possessed in the Ritual Grove split album between you and Purification on March 4th. How did you get in touch with Purification? What unites Cardinals Folly with this American sect?

Well, the music and the attitude. I liked Purification more than any other new doom band in the last decade. Split records are a good way to relax between full-lengths. We already knew each other’s work and they were also crazy enough to end up at Rafchild Records, so it all came together that way. We also shared the stage together at Riddle of Steel IV in Germany last December, and had great times playing together with those guys.

A few were, but less than you’d think. All the shows abroad happened! We had a really nice festival booked for Turku last January. That went down the drain, which bummed me for sure. To balance things out, I can say that Lucifer’s Fall were about 10 times easier to work with than Purification, and their show I saw in Adelaide, Australia really rocked the house. Well, I should know, I was mostly lying on the stage…

Cardinals Folly has showed its development from album to album consistently. Which role do these three new songs play in your discography? Is it your new step forward or is it just a bunch of cool tunes you have at the moment?

Stylewise, I wouldn’t say that this is progressive like the previous album Defying… was. It doesn’t really demonstrate new influences, aside from maybe trying out a slightly new thing in the instrumental slow typically doomy ambience of “The Second Seal”, which is something we really haven’t had before.

But despite the fairly traditional doom songs it does still represent a step forward, because of the stronger production value. This sounds bigger and offers a powerful feeling that’s more at home in heavy metal than doom. Everything is bigger and more epic this time. Henceforth, it serves as a good step forward to what we’re going to represent on the next album.

Yes, those “killer heavy metal songs”. Do you aim to jump off the doom train for awhile? Arkham Witch was just The Lamp of Thoth’s side project and you know what happened next.

You can say so. We actually got a bit drunk towards the end of our set in Vilnius, Lithuania last December and started blasting the new heavy metal songs, which wasn’t planned, haha! I think I even made the bold declaration “hey, we’re fucking off from doom metal now!” or something like that. You know, sometimes you gotta go with the flow.

But the reception of the songs was great, the audience got even wilder, and it provided a truly heavy end to the live set. I really like the power in these new songs: the deranged spirit of Cardinals Folly is definitely there, but everything is more in-your-face than ever before. No stopping it! 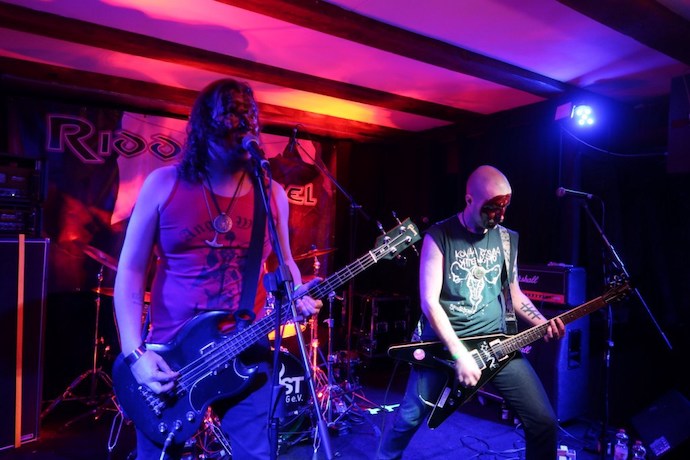 As you say, there’s a song ‘The Second Seal’ on your side of the split, and that symbol associates with the second horseman of the Apocalypse, which is War. Did you really resort to Biblical symbolism here? What inspired you to write this song’s lyrics?

The song is an instrumental! Haha. But the title comes from Dennis Wheatley‘s novel. Who of course got it from the biblical symbolism. That novel deals with the outbreak of the First World War. Wheatley is an ongoing part of Cardinals Folly‘s lore in terms of song titles and some lyrics of those songs. This has been the case since the beginning and “Uncharted Seas” on our first EP back in 2008.

What is perhaps not so funny, but coincidental in this case, is that the opening sample of the third song “Prince Prospero” on the new split is intentionally a reference to the end of the pandemic. While now “The Second Seal” accidentally ended up being a reference to the outbreak of war. I guess Cardinals Folly is more about the nowadays world than you’d think… History repeats itself and mankind will stay DOOMED.

Oh, instrumental… really? Well, forget it! Look, the world keeps on crumbling down further, and it turned to be a worse place since we talked the last time. Does the current world’s agenda change your attitude toward Cardinals Folly?

Don’t take me wrong, maybe this sounds more extreme than it is, but I never honestly thought it was any better. I’m not particularly depressed in general, but I do see what happens around me. I know people. You see a change in most people around you even, if you look closely. It’s very easy to be skeptical about mankind and it’s future. I always felt like an outsider in this world anyway. I just do the things that I like and that keep me sane – while trying to stay away from politics and such drama. It has worked so far, and I think it will work even through these times.

I’m a pretty brave man, so no it hasn’t changed my attitude. Foolhardedness forever! I’m not willing to change because of some political gamble that kinda always was there anyway. All this going on now in the world has brewed for a good while already. If I can play gigs, I do it. I’m a throwback. I doubt any dictator in the world could stop me from going to shows or else,  unless they shoot my airplane down with stingers. This is not a good joke, but that’s my attitude. We will ride until we die. And I intend to walk my own path. I try to stay myself in this crazy world.

Sounds like you’ve thought through it well! So don’t you give up some of your old habits because of that? Like following new doom metal releases for example? I don’t know if it’s your cup of tea but Lyijykomppania’s stuff from 1993 to 1996 was re-released literally two months ago.

I’m not into Lyijykomppania, but I do stay well updated in regards to new doom releases through social media and the bands I follow. The doom metal albums I have enjoyed the most recently were the new ones from Count Raven, Wheel, and Purification. But it’s easy to follow these guys because we’re more or less friends and often pay attention to what’s up.

Do you care about the “wrong” use of the “doom” tag, as sometimes we can see it on bands who perform anything from stoner, sludge or post music? Ignorant “journalists”, you know?

Well, it used to amuse me. But nowadays I understand that doom is just a very cool word to use from all slow poshy metal. They’d all want to be doom, yet none of them is. Haha. It’s weird, but sometimes the subcultures are. It’s not like most of us are really normal people, you know. 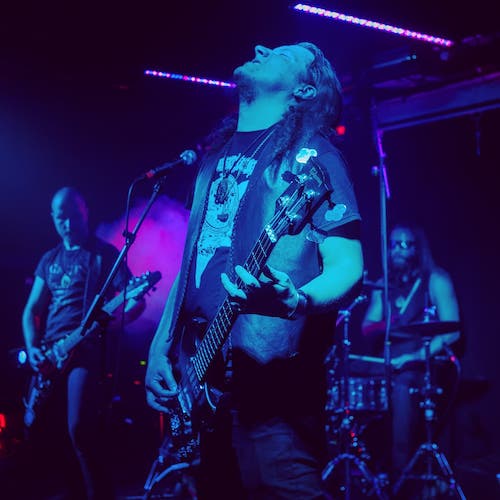 I saw there was a plan to re-release The Coven’s stuff. What’s your progress on this side? Do you see The Coven’s material as strong enough to spread it again? Or was it people’s demand?

I’m currently planning a tape box with a Czech label, but that has only all the Cardinals Folly stuff from the beginning. Not The Coven. I’m not too keen on spreading it that way, I just made it available on our Bandcamp recently, because some guys kept asking for it. It’s not like I could hide it anyway, because we did spread about 400 CDs of the first two demos back then anyway.

In May we will play some shows in Belgium and Germany. For the autumn, some shows in Finland are booked. We got some nice offers from abroad for later, but I need to shut my trap about them for now. Our next album, which will be our most devastating display so far, we’re writing at the moment. And it seems to be forming up as very interesting, I must tell you… the world ain’t rid of us yet. THE CULT OF CARDINALS FOLLY CONTINUES! – again and again…

Be careful, for such hyperactivity is dangerous! Thanks for the interview Mikko. I hope there will be an opportunity to talk about the next Cardinals Folly album in calmer times. Good luck.

Thanks Comrade Aleks. Hopefully the world will start to imitate being a nicer place again. Always a pleasure to talk to you.