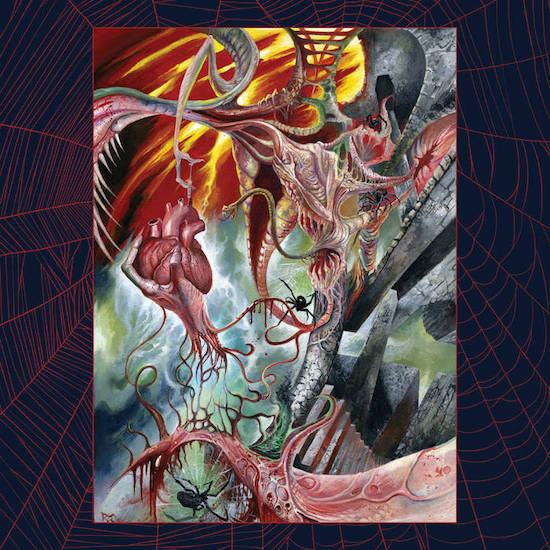 I, Voidhanger Records continues to prove that its owner’s musical interests are wide-ranging but persistently idiosyncratic. The releases usually don’t sound quite like anything else, because the artists almost always march to the beat of their own unusual drummers. And thus the label has become a home for adventurers, both those who make the music and those who listen.

The latest proof of this is Sempiternal Mobocracies, the forthcoming second album by Thos Ælla, which is the solo project of guitarist Derrik “Ghoul” Goulding from Father Befouled (who released a new album of their own just a couple weeks ago). And it truly is a head-spinning adventure, as you’ll discover for yourselves through the two songs we’re streaming for you today — one of them the first advance track from the album and the other a song we’re now premiering. 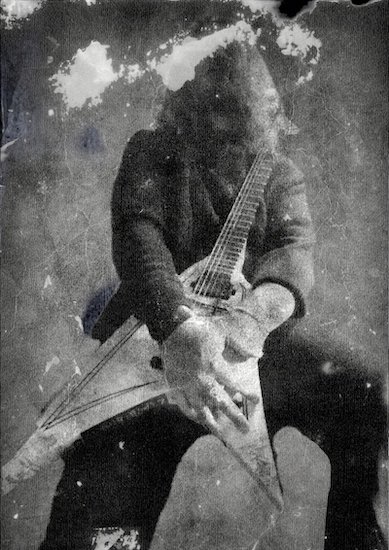 We don’t usually parrot a label’s promotional material for records, but we’ll make an exception here because the descriptive references are a useful portrayal of how multi-faceted the music is:

Thanks to an ambitious and intricate songwriting, a fresh and energetic approach, and lyrics ranging from H.P. Lovecraft’s cosmic horror to Robert E. Howard’s tales of sword and sorcery, THOS ÆLLA bring together the epic black/thrash of Absu, the elaborate melodic phrasing of early Cradle Of Filth, the progressive heavy metal of Hammers Of Misfortune, the creativity of Dan Swanö, and the aggressiveness of death’n’roll.

So now that you’ve hopefully become tempted by those words, here are some more of our own concerning today’s two song streams.

The two songs aren’t side-by-side in the album’s running order, but listening to them one after the other does provide a powerful demonstration of what a wild trip the album is.

The player below begins with a stream of the first track released from the album, “Transcending Chronology Towards An Inexorable Future“. It immediately surges into a battering and blaring race, propelled by hammering drums and rapidly darting fretwork that pulsates like an overdriven heart. The song feels explosively joyous, even though the vocals that rip through the eye-popping instrumental ecstasy are unhinged in their viciousness.

And yes, the instrumental histrionics are eye-popping. The guitars swirl and soar in flagrant delight and flicker and seethe in madness, while the percussive assaults match the fretwork’s turbocharged pace. For the listener, there’s no time to breathe… but the opening of the song we’re premiering today allows your heart-rate to slow… at least initially.

In this newest song, “Backwards Afterbirth Flows Unto Dreaming Temples” (Ghoul does have an interesting flair for words), glimmering notes ring above a methodical megaton punch and gunshot snare cracks, and unearthly musical spells shimmer at celestial heights. The sensations are beautiful but haunting as well. Eventually, the band begin to dial up the energy in bursts of thrashy riffage and clattering drums, yet this is a sinister song, in which feelings of peril and fear are never far away.

The rhythmic punch remains potent, and the high trill of the lead guitar re-surfaces in electrifying fashion, but even when the song is moving at highest speed it seems to channel desperation, and eventually it becomes a violent convulsion of insanity that will take your breath away again.

Like the album as a whole, these two songs display intricate songwriting and technically impressive execution, but they’re also very effective mood-changers, with emotional textures that range from blazing to pitch-black.

Sempiternal Mobocracies was written, arranged, performed, recorded, and mixed by Derrik Goulding at Elite Way Studios in Arabi, Georgia. It was mastered by Leon Del Muerte at Beastman Audio, and the fantastic cover art is the work of Raul Gonzalez.

I, Voidhanger will release the album on April 22nd, in Digipack CD and digital formats. Vinyl editions are planned for release by November.

One final note: Perusal of Thos Ælla‘s Facebook page shows Ghoul rehearsing with other musicians, which suggests that live performances may be on the horizon. Playing these songs live would undoubtedly be a challenge, but getting to witness them live is likely to be an exhilarating experience.