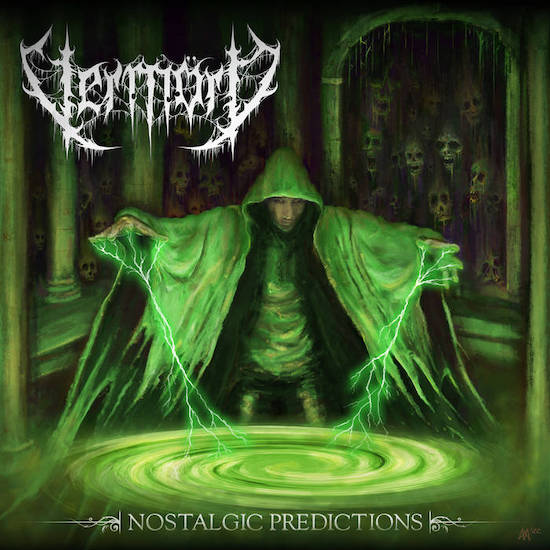 Ghoulish faces with hollow eyes gaze through marble portals, mouths agape at a hooded wizard drawing lightning from a swirling pool of infinity. It’s an eye-catching scene that Matt Lawrence has created for the debut album by Baltimore-based Vermord, one that creates an amalgam of sensations — of unearthly ghastliness, mind-bending magic, and fathomless mystery.

The visual certainly spawns a feeling of excited intrigue about the music that Vermord have created within the realm of Nostalgic Predictions, but for those who heard the band’s first EP, 2015’s Dawn Of The Black Harvest (which we premiered here) or the Dissimulation demo that followed it in 2016, the seeds of intrigue about what might come next were already planted.

Many years have passed by since then, but now the band are ready to show us what they accomplished during a period of hiatus — and they have a lot to show, through 13 tracks and an hour’s worth of music, all of which we’re presenting today in advance of the April 8 release. 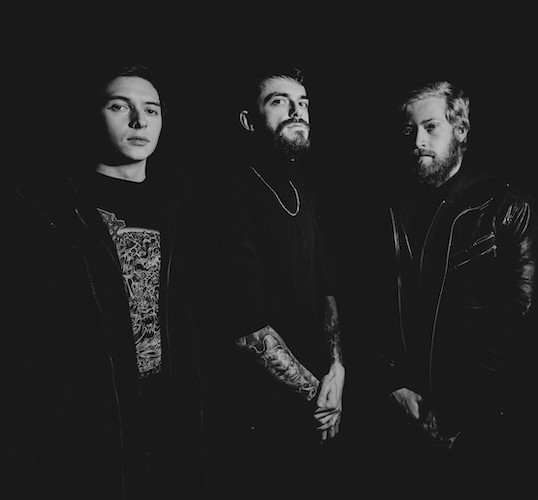 Like the cover art, the music itself proves to be macabre and magical, and lightning for damned sure does flash spectacularly.

After a quick and eerie intro, the band revisit “Dissimulation”, which ranks high on the spectacle scale and demonstrates just how multi-faceted Vermord‘s attack is. Featuring a technically eye-popping execution, the song thunders, scorches, and scintillates. The guitars dart like a flock of swallows, unfurl streamers of tremolo-picked splendor, squirm in displays of queasy madness, and meander through labyrinths both perilous and mesmerizing.

Not to be outdone, the rhythm section rapidly veer and vault with equal technical aplomb, making the song even more mind-bending (as well as physically traumatic), while the vocals are a howling and screaming terror.

And thus in one fell swoop you get an explosive demonstration of the band’s intricate and adventurous amalgam of death, black, technical, and progressive metal. It’s a bit of show-stopper right up front, but there’s no let-down after it. 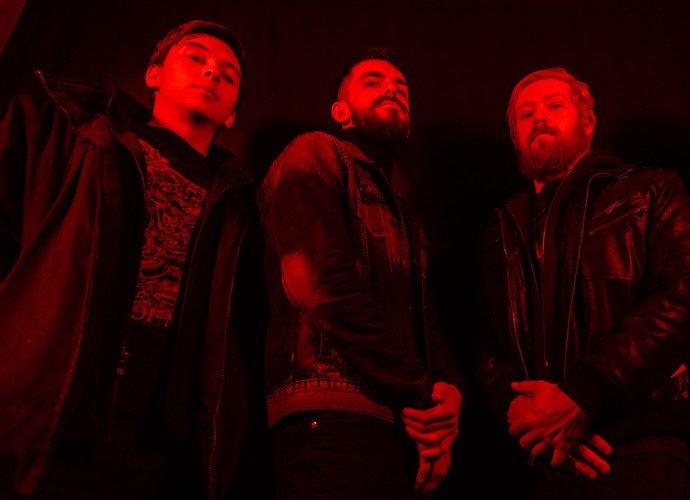 The following tracks are packed with head-spinning adventures that meld together stunning vocal savagery, bullet-spitting and bunker-busting percussive assaults, and plenitudes of crazed fretwork that cause the songs to cavort and careen with adrenaline-fueled abandon. The speed and lights-out dexterity of the performers will appeal to fans of technical death metal, while their fast-changing and mercurial instrumental maneuvers will also predictably light up the eyes of people with proggy (and occasionally even jazzy) tastes.

Yet there’s also no denying the sheer blasting and blazing savagery and bone-smashing heaviness of the music, or the utterly bestial and unhinged demonic fury of the vocals, all of which link arms with both black and death metal.

And while the music at its core is a fast-turning kaleidoscope of sound that’s geared toward causing your heart to race and the top of your head to blow off, Vermord somehow also manage to lace the songs with mood-changing melodies (often dissonant and discordant ones) that create varying sensations of sinister menace, macabre horror, blistering cruelty, brutal desperation, mesmerizing mystery, and unbounded ecstasy. (And if you want exposure to some truly wondrous musical splendor, don’t miss “Nightstar”).

Not just because the album is an hour long, there’s a lot to take in here because the album is also stuffed to the brim with ideas, and the band throw them at you with enough electric energy to power a large metropolis. For better or worse, there’s no real relent in this musical flash-flood. Perhaps paradoxically, it’s the sheer adventurous explosiveness of each track, one after the other, that keeps attention riveted rather than exhausted.

This album is a cumulation of the few songs written shortly after the EP, but the majority of the songs are from a hiatus time for the band. It is a reflection during a time of many changes. The album features ‘nostalgic’ songs for us that were never released, as well as a few extra writings that we wanted to feature.

Noistalgic Predictions was recorded by the band, and then mixed and mastered by Noel Gardner at Grimoire Records. It comes recommended for fans of Necrophagist, Emperor, Decapitated, and Dark Funeral. You can pre-order it now, in digital and CD formats:

2 Responses to “AN NCS ALBUM PREMIERE (AND A REVIEW): VERMÖRD — “NOSTALGIC PREDICTIONS””