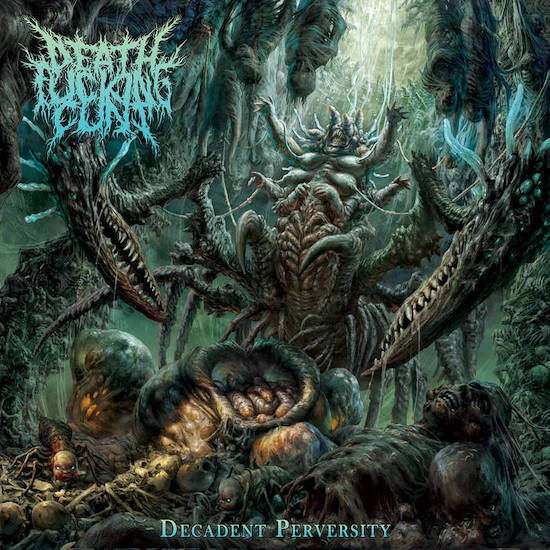 Let’s not spend any time debating this Australian band’s choice of name — they obviously don’t care what you think about it, and besides, their music’s not going to get played where anyone would be squeamish about uttering the name in public. Except in certain quadrants of extreme metal, the name’s outrageous — but so is the music. So let’s talk about the music.

Specifically, let’s talk about “Devoured By Eunuchs“, the song we’re premiering today from DFC‘s debut album Decadent Perversity, which is pegged for release on June 10th by Transcending Obscurity Records. 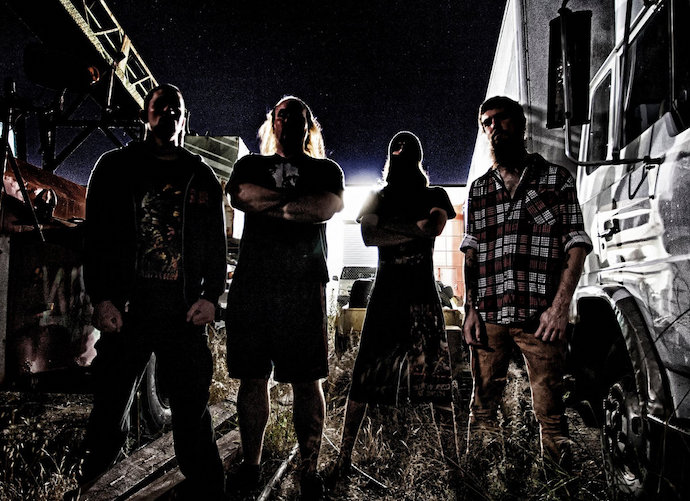 Anyone who has spent more than a modicum of time sampling the current wares in the marketplace for technical death metal has become inured to speed and flash. Whether that thrills you or makes you numb, we know very well that there are lots of musicians out there capable of near-superhuman feats of adrenaline-fueled dexterity. Some of those people are in DeathFuckingCunt.

As displayed in “Devoured By Eunuchs” and other tracks on the new album, DFC are maniacally fast — but also downright maniacal. It’s not just the meteoric speed that stands out in the music, it’s the feeling of unchained insanity that surges through the mega-BPM drumming, the feverishly swirling and quivering fretwork, and even the gravel-gargling and screeching vocals.

Equally impressive on a technical level is how well all the blindingly fast moving parts are locked together, like some alien machine whose gears are spinning at the speed of a centrifuge. And thus the music uses precision to create derangement.

But that’s not the only reason why the song, like the whole album, is such an outrageously exhilarating thrill-ride. It will scramble your brains like eggs on a superheated grill, but the band also work in punishing pile-driver grooves that give your pulse (and your neck) a bunch of extra jolts.

Moreover, the sheer ferocity of the music is palpable — there’s a rabid animalistic quality to the music that further prevents it from sounding simply like the workings of a cold hyper-fast machine. And on top of all that, the track quickly becomes addictive. The impulse to spin it again is startling.

And then there’s the surprise ending (certainly not the only surprise on the record), but why spoil it?

If this gets your motor running and you mind whirling, you’ll be glad to know that three other tracks are up for streaming at the Bandcamp page for the album, linked below.

Credit for the monstrous cover art goes to Daemorph Art.