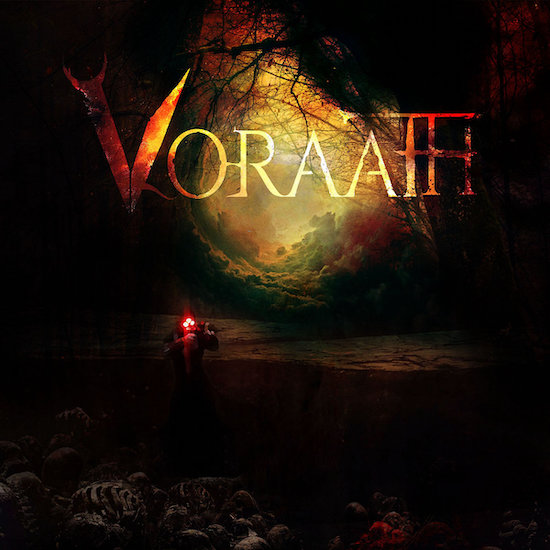 Perhaps more than any other genre of music, metal continually intersects with science fiction and fantasy. We can leave to another day a discussion of why that is, and why so many metal fans are themselves also fans of sci-fi and fantasy in literature and cinema. The intersections have proven to be varied both in the style of the musical narratives and in their degrees of success. But when they work, they can be tremendously satisfying.

Which brings us to Voraath, an experimental death metal band whose line-up hails from the Carolina’s and includes members from Nile (Brad Parris), Xael (Joshua Ward), Rapheumets Well, Implosive Disgorgence, and Sweet Blood. They have conceived harrowing unearthly tales and narrated them through genre-bending music that is, in a word, spectacular. Moreover, they’ve wrapped the story lines and music in gripping cinematic videos, and we have one of those for you today which accompanies the Voraath song “The Barrens“. 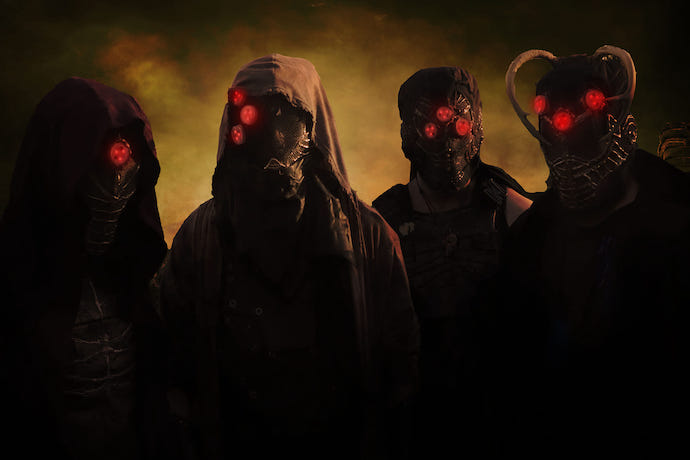 Voraath present this description of the story that’s the focus of the song and video:

Picture a dystopian Earth around the year 2136 and more than 80 percent of the world’s population disappeared after the arrival of an alien species. The music follows a group of mercenaries employed by The Eos Corporation to locate and retrieve something referred to as “the nexus key” in which they run into some complicated and dangerous resistance. Since the arrival of the “Cosmic Architects” strange creatures now roam the dystopian planet. The music is meant to portray the dire and odd environment in which the story unfolds.

The song itself unfolds in narrative fashion, moving from one riveting experience to the next. As it unfolds, it immerses the listener in an eerie and ominous atmosphere, building tension even as it gets your muscles twitching, and then throws us into a war-zone of bullet-spitting drums, viciously jabbing riffage, savage roars, and scalding screams. Percussive bombs go off with bunker-busting power, and the music towers in displays of frightening, otherworldly grandeur, and seethes and scythes with lethal intent.

The music reaches new heights of fire-storming intensity, burning with feverish desperation, and then suddenly shifts into a classically influenced acoustic guitar and bass instrumental that’s sublime. That proves to be a segue into yet another phase of the musical narrative, one that’s glorious. The drums continue their blistering assault, but the music soars on the wings of solos of riveting splendor, heroic singing that goes sky-high, and the vast sweep of cinematic synths, which collectively end the track in a panoramic finale of stunning magnificence.

The video makes a fantastic match for the extravagance of the music:

It’s not hard to understand why Voraath‘s is recommended for fans of SepticFlesh, Cattle Decapitation, Fleshgod Apocalypse, Igorr, and Nile, and it’s also hard not to get excited by the news that Voraath are at work on their debut album.

“The Barrens” is the band’s second single, and we’re also including the video for the first one, “Siren Head“. Both are available on digital platforms, including Bandcamp.

No Responses to “AN NCS VIDEO PREMIERE: VORAATH — “THE BARRENS””