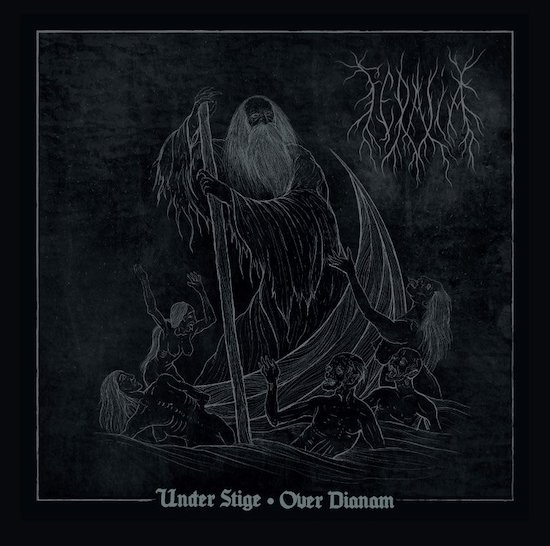 As the title of Feralia‘s new record suggests, it’s a two-part work, combining the album-length Under Stige with the EP-length Over Dianam. They are conceptually linked, focusing on “the rituality of Death and the Afterlife in Ancient Roman traditions”, but musically they are different.

The band and the label that will release it on April 28th (Time To Kill Records) characterize the two parts in gender terms: “As Under Stige is extreme, nocturnal, ritualistic and manly, Over Dianam develops in the opposite direction. Four folk-oriented tracks that carry more of a bright, ambient, feminine mood, overall giving life to a play of opposites that is the essence to the new album.”

However one might choose to classify and characterize these two companion works, the combination of them creates a fantastic listening experience from an extremely talented band, and one that we’re delighted to share with you in complete form today. 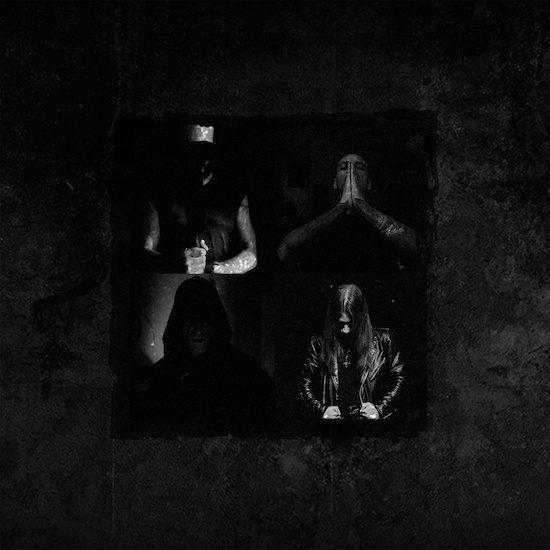 During the seven songs that make up the roughly 40 minutes of Under Stige the band rove among some of the tropes of second-wave black metal but with twists of their own that make the trip an especially dynamic and gripping one. The album is very much a “modern” and adventurous hybridization of many genre ingredients than a hidebound re-hash of what we’ve all heard before. It conjures visions of night-time urban streets and broken dreams more often than wintry northern forests and slashing swords.

The twists manifest themselves right away, with the ringing guitar and piano instrumental at the outset of “Laudatio Funebris”, which opens the album in spooky and sinister yet seductive fashion. That song also gives you a taste of the scarring effect of the band’s riffage and raging snarls, and it’s an early sign that Feralia aren’t wedded to incessant blast-beat propulsion.

The constant variability of the drumming is indeed one of the album’s strengths, and the variations don’t end there. The vocals drop into frightening gothic growls and gloomy post-punk singing, and segue into frightening whispers, episodes of throat-scarring agony, and even dismal monastic chants.

The riffs speed and slow, rake and boil, whirl and dance, ring and soar, creating piercing harmonies that build tension, create feelings of confusion and desperation, and paint sonic panoramas of harrowing grandeur. Lead-weighted bass lines rumble the bones and bounce the legs. Keyboards are deployed to build gothic atmospheres of moodiness, mystery, and fear. Beguiling piano and acoustic-guitar melodies surface and re-surface.

Moreover, while there’s plenty of grit in this soundscape, the production affords more clarity than it does murkiness and abrasion, and that suits the songwriting very well, because it’s the elaborate and even elegant nature of the songcraft that makes the album stand out. To be sure, there are bursts of ferocity and feral wildness, but what makes Under Stige a great record are all the striking instrumental and vocal variations and the tremendously stirring power of the melodies, straight through to the utterly spellbinding instrumental that ends it.

And yes, it really is a great record.

Over Dianam is in some obvious ways a very different experience, but those very differences reinforce the impression already left by Under Stige — that Feralia are an extremely creative group with wide-ranging interests and talents.

The four songs that make up this EP principally rely on acoustic guitar harmonies and misty synths (with occasional muffled percussive thumps and what might be violin or cello strings), and the vocals (which are sparsely used) are mainly clean-sung, though once again there are significant variations in their range and emotional contours.

The songs are fine examples of music that weaves dark spells, and their presence following the greater intensity of Under Stige makes them even more captivating. They’re like the other side of a single coin.

Here, sensations of wistfulness and sorrow, yearning and surrender, hold sway, but these songs are also elaborate and elegant in their own haunting way (the guitar performances are magical), and in their own way they’re just as enthralling as the album-length work that precedes them. Put them together, and it’s an even more wonderful accomplishment.

The band’s new album marks the entry into lineup of new singer/guitarist Erymanthon Seth (Apocalypse) and new drummer P. (Noise Trail Immersion, O), joining bassist Krhura and guitarist, synthesist, and backing vocalist Raijinous, and their presence undoubtedly contributes to the differences between it and the band;’s first album Helios Manifesto.

In addition, the new one includes guest appearances by Agghiastru of Inchiuvatu and Haavard of Dold Vorde Ens Navn (ex-Ulver, ex-Satyricon), the former in “Laudatio Funebris” (Under Stige), the latter in “The Altar and the Deer” (Over Dianam).

The album is available for pre-order now. Don’t delay!