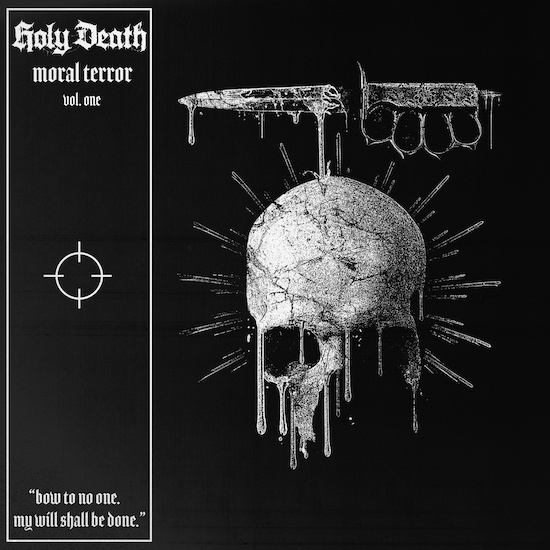 The occasion for today’s slobber is a new Holy Death EP, a two-song discharge entitled Moral Terror Vol. 1, so-named because it’s the first in a three-part series that the band plan on releasing this year. It’s set for digital release on April 29th, but we’ve got a premiere stream of its two diabolically punishing tracks today. 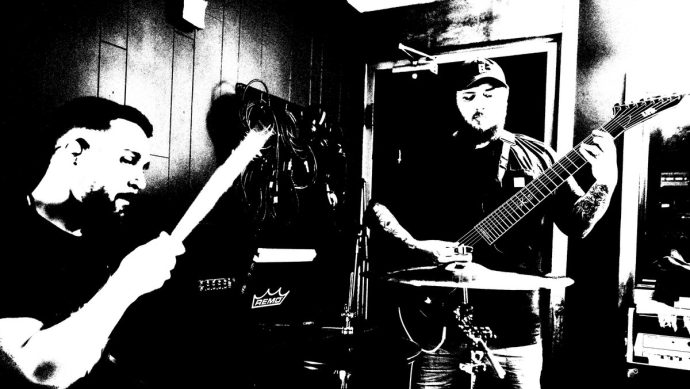 Both songs are short, apocalyptically heavy, and certifiably deranged, and so brutally groovesome that it’s hard to sit still even as they’re inflicting severe spinal trauma.

The first of those tracks, “East ov Eden“, begins as a merciless, lurching stomp, with the guitar and bass tuned to a sadistically corrosive timbre, but soon enough the guitar swarms and seethes and the drums rumble like an avalanche. As the lyrics are expelled in raw, braying howls, the music transforms again — into a titanic pile-driver of sound, interspersed with a bass solo that sounds gargantuan and a guitar solo that’s a total freak-out. Additional swarming, stomping, and howling lie in wait before this brief but calamitous bruiser reaches the end.

The second song on the new EP is “Ultraviolent“. It wastes no time delivering a maniacally darting and immediately infectious riff and another dose of methodically skull-crushing groove. The guitars wail as well as growl, coupled with livid doses of vocal torment, a writhing, demented solo, and an increasingly dismal atmosphere generated by all the mid-paced megaton pounding and agonized guitar-groaning.

Moral Terror Vol. 1 was produced and mixed by Alex Estrada (Nails, Xibalba), and you can pre-order it now at Bandcamp for $1 or more (and it’s definitely worth more). While you’re at Bandcamp, be sure to check out the band’s previous releases — you won’t regret it.