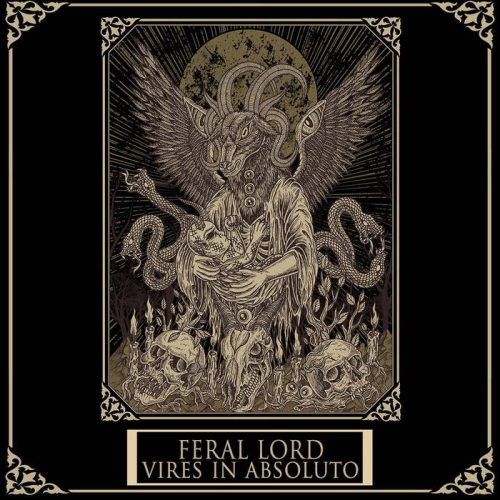 (Andy Synn dives headfirst into the abyss with the new album from Feral Lord, out tomorrow)

This week is a big one for those who consider themselves fans of the more abstract, abrasive, and avant-garde end of the Extreme Metal spectrum, with new albums from Haunter, Cosmic Putrefaction, and Feral Lord all scheduled to hit the streets on the same day.

Sadly I was never going to have time to write about all three of them (not, at least, before they’re released), and since I fell so hard for Feral Lord‘s debut album, Purity of Corruption, last year, the choice of which of the three to devote my time to pretty much made itself.

The thing is, even though I am a huge fan of the duo’s previous work, I’m not ashamed to admit that I simply was not prepared for what they’ve created on Vires In Absoluto, and chances are – no matter what you think you’re about to hear – neither are you.

Right from the moment that the sombre introduction of the opening title-track lilts its way out of the speakers it should be obvious that, despite the fact that less than a year has passed between the two records, Vires In Absoluto is a much different album than its predecessor.

But while it is, in many ways, a more “melodic” (and I use that term loosely) album than Purity of Corruption, that doesn’t in any way make it an easier listen.

If anything, this is by far the more devious and demanding of the two records, as while there’s no denying the haunting nature of the allusive acoustic passages scattered throughout the album, nor the eerie effectiveness of the sinister, psychedelic melodies which permeate songs like “Inversion of All Truths” and “The Cold Embrace of Abyssal Entities”, Vires In Absoluto is very much an album of multiple extremes, one which simultaneously pushes every aspect of the band’s sound – the brooding atmosphere, the cacophonic dissonance, the volatile, blackened aggression – as far as they can possibly go.

Take “Death Brings Glory”, for example – over the course just over eight minutes it drags the listener, helter-skelter, through a series of ever-shifting passages of chilling ambience and warped, proggy melody, pounding rhythmic fury and discordant angularity, all overlain with a cavalcade of caustic, cadaverous howls and underpinned by a complex and chaotic drum performance that constantly seems right on the edge of collapsing into pure bedlam.

And yet there’s a clear method to the madness, if you look (and listen) closely enough, a bizarre sort of balance, with every sudden stop or whiplash-inducing transition occurring at just the right time, and every wrenching push in one direction resulting in a corresponding pull in another, until you find yourself spinning out of control like a whirling dervish trapped in a trance-like state of ecstatic extremity.

But while the end result of all this is undeniably dizzying, it’s also hideously compelling, with Feral Lord joining a rarefied group of artists – Skáphe, Leviathan, Blut Aus Nord, et al – whose music, while unquestionably Black Metal at its heart, refuses to bow to the expectations of others, constantly twisting and turning to evade your grasp, all while daring you to keep up along the way.

Nowhere is this more clear than during colossal closer “Fanatic Enemies of the Mundane Order” (a song whose title effectively describes the band’s entire modus operandi), whose chilling opening bars eventually give way to an unpredictable, and almost unrelenting, torrent of visceral, blackened riffage, grimy, infectious grooves, and twisted, torturous dissonance, all laced with threads of subtly proggy, pseudo-psychedelic melody whose infiltrating presence serves to tie the track together even as it constantly threatens to come apart at the seams.

Ambitious, abstruse, and wilfully anarchic, this is one album that isn’t playing by anyone else’s rules.