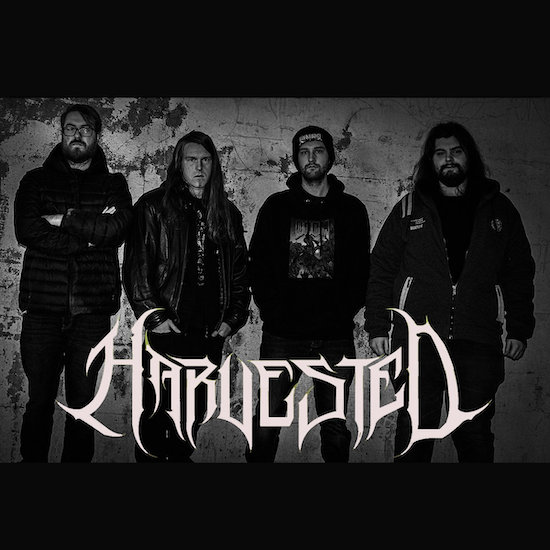 That melding of speed, savagery, and technical fireworks makes the run through the full torrent of the EP an electrifying (and indeed breathtaking) experience, and it’s an experience we’re providing today through our premiere stream of the EP in its entirety. So, take some deep breaths, and proceed…. 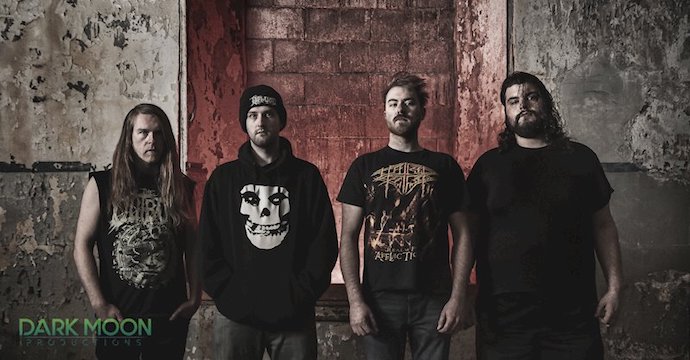 Having set the stage in such explosive and head-spinning fashion, Harvested keep the intensity in the red zone with “Bludgeoned“, which rampages at a similarly turbocharged pace and if anything is even more crazed, yet the song includes a swirling guitar solo and puts the bass in the spotlight in mesmerizing fashion as well.

Rapidly slugging grooves, jabbing riffs, squealing strings, and rapid-fire vocals make “Incognitive” a viscerally jolting powerhouse of sound, and the well-named “Delirium” does an effective job of putting the listener’s brain in a whirling centrifuge propelled by manifold riff-changes while mounting a jackhammering attack on your skeletal integrity.

The EP ends with the brazen yet also enigmatic “Bereavement“, one final thrill-ride of kaleidoscopic fretwork, jaw-dropping drum acrobatics, and vitriolic vocals. But the song’s name comes to the fore in guitar leads that have an anguished resonance in the midst of the surrounding mayhem.

As a whole, the EP is a big adrenaline trigger, and the compact but action-filled nature of the songs means that they don’t out-stay their welcome. It’s the kind of full-throttle yet elaborate rush that makes it very easy to start all over again as soon as you reach the end, both to keep the mental high going and to get a better grasp on all the whirlwind machinations that Harvested have orchestrated.

Lyrically, all the songs focus on different aspects of mental illness, ranging from narcissism and the lack of empathy in collective society to paranoia and schizophrenia, post-traumatic stress disorder, insanity, and suicidal depression. We’ll also share with you these comments from the band about what they’ve accomplished:

“We are beyond thrilled to present our very first self-titled EP to everyone. After years of hard work and dedication, as well as lockdowns and a few minor setbacks have only made us more prepared and we are finally ready to show you all what we’ve got. Having years of musical background and being good friends for years has added to the energy and chemistry we portray in our live performances. Our debut EP is just a taste of what we’ve accomplished so far as an unknown band in the last 3 years of forming, though we have much more in store coming very soon!”

Harvested was recorded, mixed, and mastered at Dark Moon Productions, and the drums were recorded in 2020 at Silverwings Studios in Montreal. The Harvested EP is set for release on May 7th, and it’s up for pre-order now.