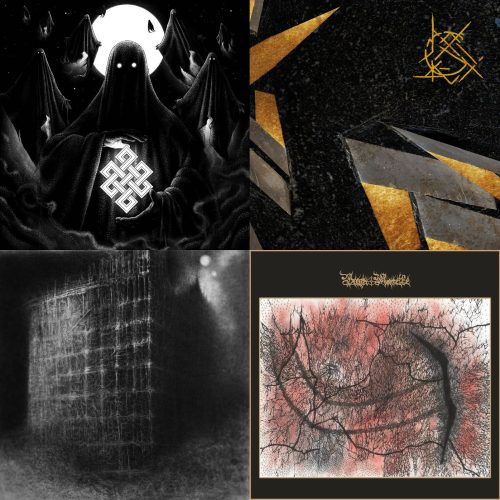 (We may be well into May, but Andy Synn still has albums from last month he needs to talk about!)

As I stated in last week’s column, I don’t plan to make a habit of this, but April was so packed with excellent new releases by relatively unknown bands that I had to split up my usual “Things You May Have Missed” column into two parts in order to feature as many of them as possible.

Of course, there are still several things I/we didn’t get around to writing about, including Azaab, Basatan, and – most notably – Dischordia, whose new album is currently sitting very high in my provisional year-end rankings.

But I only have so much space and/or time, and really didn’t want to extend this to a third part, so choices, and sacrifices, had to be made.

Still, I think you’ll be happy with the artists/albums I’ve selected for part 2 of “Things You May Have Missed” from last month, which this time includes some Prog and Hardcore influenced Post-Metal from Norway (Claimstaker), some esoteric and experimental Black Metal from Belgium (Dissolve Patterns), and a pair of bands from the good ol’ US of A, one dealing in gloomy shades of gargantuan Doom (Qaalm) the other delivering a noisesome plague of harsh Blackened Death Metal (Worn Mantle).

CLAIMSTAKER – BURY US IN SHADOWS

Chances are you won’t be familiar with the music of Claimstaker, as this is the group’s debut album and largely flew under the radar last month.

You might, however, recognise the name Timeworn, whose previous three albums (prior to the group’s dissolution) we’ve covered here at NCS in one way or another. And since Claimstaker is, in essence, a spin-off of Timeworn, well… you’re probably going to want to check out Bury Us In Shadows sooner, rather than later.

Whereas Timeworn‘s music, when push came to shove, tended to err more towards the proggier side of the Sludge/Post-Metal spectrum, Claimstaker come down much more on the Hardcore-influenced side of things, delivering a harder-hitting version – and more instantly infectious – version their previous band’s sound.

“All About the Numbers”, for example, is all big, bombastic riffs and shamelessly anthemic hooks (seriously, it’s a goddamn crime this song didn’t get more exposure and/or airplay), while the energetic gallop of “Darkness Without Salvation” honestly wouldn’t sound out of place on a Martyrdöd album.

That being said, you can take the band out of the genre, but you can’t necessarily take the genre out of the band, and the subtle proggy touches scattered throughout this record prove that Claimstaker aren’t afraid to think outside of the box a little, whether that’s in the form of the Burst-sounding “Brevity” or the doomy, Planks-esque “The Empty Quarter” or the ambitious, Prog/Sludge/Hardcore hybrid that is the closing title track.

Either way, you’re going to want to give this album a listen ASAP. And then listen to it again. And again. Because it gets a little better each time.

It’s kind of funny, to me at least, that there are still people out there who think that Black Metal is (or should be) this insular, stagnant scene that’s never moved past its primitive early-90s origins, especially since – if you take a look at/listen to bands like Oranssi Pazuzu, Imperial Triumphant, Névoa, Grey Aura, etc – it’s pretty obvious that the genre is as creatively vibrant and artistically alive right now as it’s ever been.

And, as if to reaffirm that point, last month saw the release of the debut album from Belgium’s Dissolve Patterns, whose name can now be added to the above list of artists proving that Black Metal continues to expand and evolve.

Across the four numbered tracks (and one enigmatically untitled interlude) Dissolve Patterns blend harsh, harrowing vocals and discordant, nerve-jangling guitars with fluid, fluctuating bass lines and creative, complex percussive patterns – equally at home delivering punishing percussive blasts as they are lithe, jazzy licks – alongside passages of dark, dreamlike ambience and interjections of melancholy cello, in a manner that manages to be both uniquely unpredictable yet also incredibly compelling.

And while each of the album’s five songs certainly shares a certain x-factor which helps tie the record together as a singular piece of art (and one best experienced as such, in my view) they also each have their subtle (and not-so-subtle) differences which allow them to stand apart while remaining a part of the greater whole.

Ultimately this is a great example of Black Metal that isn’t afraid to embrace outside elements – the subtle Jazz touches, the gloomy, doomy atmospherics, the grim, neo-classical grandeur – but also isn’t ashamed to actually be Black Metal. And this unshakeable sense of confidence is precisely what enables Dissolve Patterns to stretch their musical wings, safe in the knowledge that they have nothing to prove to anyone except themselves.

The five members of Qaalm appear, on first listen, to have come together to answer a question which has plagued philosophers through the ages… “what would happen if Alcest and My Dying Bride had a baby?”

Ok, so that statement isn’t entirely accurate (nor is it definitive, as there’s definitely some Katatonia influence in there too) but it’s not entirely inaccurate either, as much of Resilience & Despair feels like a marriage between the airy, ethereal melody of the former and the earthy, funereal riffage of the latter, a combination which ultimately provides the band’s music with a captivating and contrasting dynamic to play around with.

It’s a good thing too, as not one of these four tracks is shorter than fourteen minutes (gorgeously gloomy opener “Reflections Doubt” being the shortest, the torturous, Triptykon-esque “Existence Asunder” being the longest at a hair of nineteen-and-a-half minutes) so the band’s ability to keep shifting between heavy and haunting, aggressive and atmospheric, morbid and melodic, is key to making these songs – and the album – a success.

Sure, it’s not 100% perfect – it’s occasionally a little too in thrall to some of its more obvious influences, and sometimes seems as though it’s attempting to do too many things at once/in quick succession (some of the gnarlier, snarlier, Black Metal moments are a little bit of an odd fit in the grand scheme of the record) – but even at its “weakest” moments still shows a ridiculous amount of promise and potential.

Ultimately, while Resilience & Despair is definitely going to make some hefty demands of both your time and your attention-span, it’s more than good enough to justify its demanding nature, and the subsequent rewards should be more than enough to keep you invested and engaged and hungry for more.

And while I’m sure I could find out all these things relatively easy, I’m too busy immersing myself in the filth and fury of their self-titled debut album to care.

One thing I do know, however, is that their love of massive songs and monolithic riffs means they must have a background in Doom, even if you’d be hard-pressed to call tracks like the grimy, gut-churning “Protean” and colossal closer “Supplicant” anything more than “doomy” or “doom-esque” in places, despite their occasional moments of suffocating, slow-motion annihilation.

More than that though, is hard to say, as this is an album that clearly doesn’t care for strict boundaries between genres, existing instead at a nexus point between bands like Incantation, Revenge, Portal, Valdur, etc – part Death Metal, part Black Metal, part pure, chaotic noise.

And yet there is clearly a keen method to the band’s madness, the screeching amps and ear-scraping riffs of “Burning Light”, for example, eventually spinning apart to reveal a void-like aperture of eerie ambience, all the more unsettling for how it contrasts with the sheer pandemonium which makes up the rest of the track, while the warped, proggy embellishments strewn throughout “Aseity” are grounded in some of the dankest, dirtiest riffage you’re likely to have heard all year.

Not an easy listen, by any means, and certainly not one for the faint of heart (honestly, it should probably come with a health warning attached) this is still an album I encourage all our readers to check out, even if only a certain percentage of them will be able to properly appreciate what Worn Mantle are doing here.