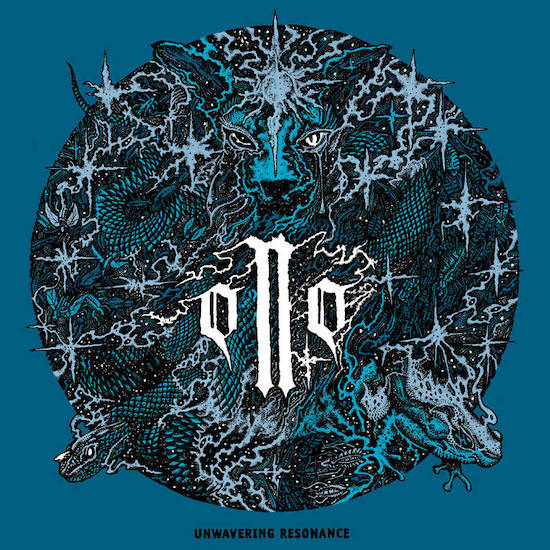 If you’re unfamiliar with the music of the Slovakian trio 0N0 (and shame on you if you’re not!), Metal-Archives will tell you that it’s “Experimental Industrial Doom/Death Metal”, which is a mouthful, and still not completely adequate. As we wrote here when we last had occasion to write about 0N0, “Eerie, chilling, tremendously heavy music” might be a different way of trying to wrestle their sounds into linguistic form, yet still misses some relevant adjectives.

That last visitation we made was through our premiere of the band’s tremendous 2019 split with Owl, and today’s reunion is prompted by their follow-on release, a new album named Unwavering Resonance.

Divided into four massive tracks that collectively just under forty minutes, it’s no easier to classify than 0N0‘s previous creations. It presents a sequence of extravagant, elaborate, mind-blowing, and jaw-dropping journeys so wondrous and frightening that they seem only barely tethered to the planet we call home. We have one of those excursions to share with you today, and it’s the new album’s title track. 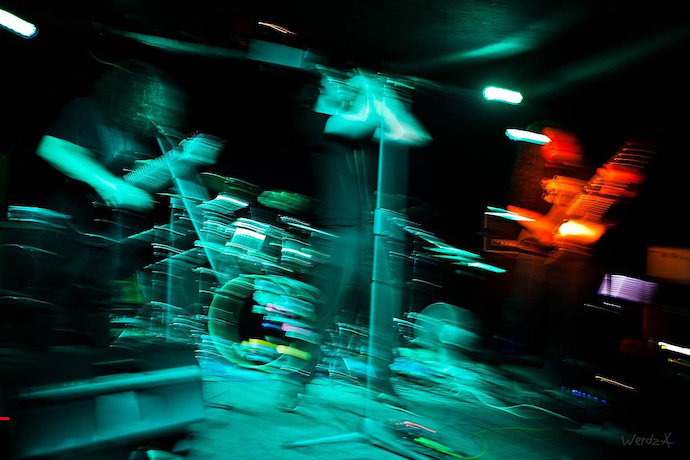 The band themselves provide this preview of the song through the words of one of the guitarists who goes by the entirely suitable moniker Twisted:

“Unwavering Resonance” is traditionally an 0N0-esque marriage of various extreme metal genres, such as doom, sludge, death metal, black metal, all entwined with industrial aura and cosmic ambiance. Lyrically, the track delves into primeval memories of its originator and their unwavering influence on his inquisitiveness and the everlasting quest for knowledge and creation.”

The song is a “slow build”. It begins with eerie and perilous shimmering tones that seem to radiate into our dimension from an astral plane. Those spine-tingling sounds flow into haunting vocal melodies that soar and harsher tones that scar, underlaid by booming drumbeats and heavy bass undulations. The music’s atmosphere of otherworldly tension and danger mounts as the vocals become increasingly scathing and tormented and the riffing claws and slashes at the mind.

The track never really leaves the unearthly realm it creates. Twisted guitar arpeggios meander in a dissonant, serpentine path; the vocals growl, bark, and scream; the fever in the song heats to a boil, drums thundering and the guitars mewling and wailing in derangement, ultimately creating a cacophonous maelstrom of madness and apocalyptic destruction.

In the aftermath of that devastation, the music rises and looms like an ominous black tower. The singing returns, and weird vibrating sensations skitter and shine high above, adding to the atmosphere of fearsome imperiousness.

We’ll also share with you the new album’s previously released opening track, “Clay Weight“, an even longer and more elaborate musical excursion than today’s premiere, and one that may be even more mesmerizing, more frighteningly grand, and more catastrophically harrowing (and more likely to produce sore-neck syndrome in listeners).

Unwavering Resonance is 0N0‘s third full-length, and it should appeal to fans of the bands that have inspired the group, which includes industrial influence from Godflesh, doom influence from Esoteric, and death metal influences from Gorguts and Ulcerate, as well as additional influences from the likes of Blut Aus Nord, Meshuggah, Deathspell Omega, Type O Negative, and Dead Can Dance.

The album is set for release on June 24th via The House Of What You See, and it’s available for pre-order now. It was recorded and mixed at LU69 studio, mastered by Greg Chandler at Priory Recording Studios, and features cover art and layout by Viral Graphics.