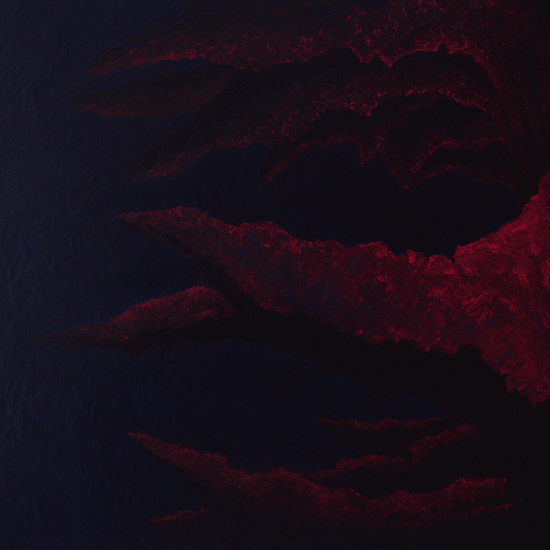 It is our privilege and pleasure today to present, on the day of its release, a full stream of a new split recording by two bands we’ve been avidly following for years — the German duo Owl and the Slovakian trio 0N0. The split includes five songs by Owl and two by 0N0. Through each band’s Bandcamp page it’s now available as a digital download and as a cassette tape, limited to 111 copies, with eerie and immersive cover art by T.

As always, we’re sharing our own reactions to the music, as well as a few insights into the inspiration for all these songs, and some background about the bands for those who might not be familiar with them. But of course, if you want to just be completely surprised, skip down to the very bottom of this article and start listening now.

Nearly two decades have passed since the formation of Owl, and in that time they’ve released three albums, a quartet of EPs, and now this split. Over the course of those releases, it’s fair to say that the music has transitioned from prog-minded death/doom to something that could be characterized as ambient doom metal. But the music of Owl on this new split diverges again from what you might be expecting if you’re familiar with their last album. This was forecast in our February 2019 interview of founder Christian Kolf (also Valborg), who performed vocals, guitars, bass, and synth for the split (and who was joined by drummer Tentakel Parkinson).

At that point Christian described three of the songs he was then mixing for this release as “really heavy and chaotic”. “Sorry,” he said, “no Doom this time, but a lot of blast beats.” But those are only three of the songs now presented.

Christian described the opening track “Cascades” to us as “the beginning, of the end to come”, and that opening cascade of ambient sound and hammer blows certainly creates a tangible and oppressive sense of foreboding — a feeling of tension which then breaks in the deeply unnerving and brutalizing sensations of “Tower“.

Originally written in 2012, that second track on the split was inspired by Chaosphere-era Meshuggah vs. Wildhoney-era Tiamat. “The end of the song,” Christian continues, “is the total self-dissolution/self-destruction, power thru resignation/realization”. The vocals are both scraped-raw in their mind-splintering intensity and haunting in their wretchedness. They were recorded in 2018, at “a time where I was in a lot of stress and had the urge to release an inner pressure, created by some painful and hurting personal experiences”. Christian further explains:

“It was a release, an act of revenge. Giving everything, exaggerating everything, going one step further, having old Slipknot and Ross Robinson in mind. Screaming until it hurts and going even further. It sounds corny, but it is what it is, it had to be done like that, especially in times, where I had the feeling, that everything is senseless. The less sense, the less I don‘t give a fuck. It‘s naked, it‘s personal, I don‘t care, because nobody cares. Just a little hope in my mind, that some lost people will get some strength through this, because we are all not alone.”

There are moments of mesmerizing and mystical beauty within “Tower“, but the closing crescendos are terrifying enough to stiffen the hairs on the back of your neck. The track that comes next, “Ravine” is perhaps a bit less immersive, a bit less likely to leave you shivering, but it’s still damned intense, matching demented soloing and crazed but crushing riffs — a yowling, howling maelstrom, with vengeful vocals that are still out on the bleeding edge. “A short brutal banger”, is how Christian describes it. Also written back in 2012, it was inspired by City-era Strapping Young Lad.

After those last two tracks, it’s no wonder that Owl inserted an interlude with “Gone“, a shift back toward something akin to the intro track on this split. Per Christian: “Preparing the end. Using elements that I discovered just one year ago. New synth elements that will flow into the new OWL music I am currently working on”.

The interlude doesn’t last long, and then we’re thrown back into the nightmarish black maelstrom of “Coast“, which is much more in line with “Tower” and “Ravine”. This one was written in 2018, and combines dissonant flickering arpeggios, massive groaning chords, pummeling percussion, through-lines of dismal melody, and another spine-tingling dose of vocal madness and fury — and a spellbinding yet threatening conclusion.

Christian told us he wanted to have “an epic ending”, and considers the song “Post Black Metal inspired,” with “emo riffs, extreme blasts, brutal vocals — ‘Living the dream inside. Dying on the outside.’ Well, this is what happens if you love music too much, right?”

P.S. It would be a mistake to assume that the next Owl album will be in line with the trio of ravagers that Owl included within this split. At least in the interview referred to above, Christian Kolf described plans for “more ethereal and melodic” sounds, but of course those were early days in the evolution of the next record. We’ll just have to be patient in waiting to discover what it will present. 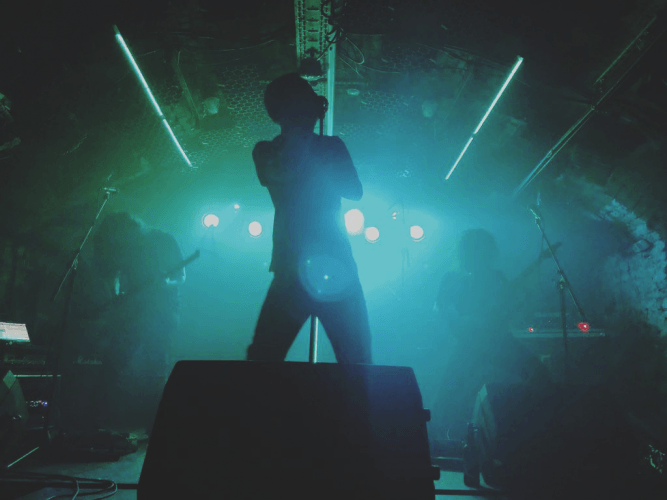 And now we move to 0N0. Not quite as long-lived as Owl, but certainly no newcomers, this trio from Bratislava have released two albums and four EPs since their formation in 2005, and the most recent of those was the Cloaked Climax Concealed EP that saw release through Transcending Obscurity Records in the spring of this year (and which I commented on here). The band’s music is not easy to categorize. If you visit M-A, you’ll see “Experimental Industrial Doom/Death Metal”, which is a mouthful, and still not completely adequate. “Eerie, chilling, tremendously heavy music” might be a different way of trying to wrestle the music into linguistic form, yet still misses some adjectives.

Focusing on the two tracks you’ll find on the split, “Sleepless Slumber” was previously released on 0N0‘s 2011 debut full-length Path, and “Chambers of Oblivion” was originally released on the Noize Konspiracy Volume 9 Compilation (2008) under a different name and (we’re told) “highly questionable circumstances”. For this new split, both tracks received new production and vocals, and each one was rearranged and upgraded. It is best to consider them as they are rather than to waste time on comparisons to the original versions.

Both songs are long ones, as you might expect, given that they’re paired with five tracks by Owl. The first of those, “Sleepless Slumber“, is well-named. It seems to invite us into a half-waking, half-sleeping dream state, a frightening and bewildering cascade of sounds that might be the experience of some otherworldly being captured in flesh, its previous existence lost in memory, but eventually surfacing again, and pointing the way to an emergence from sleep and an ascendance to power.

The music changes, of course. At the height of its powers, it’s a towering monolith of titan-like chords, knee-capping drum blows, roaring vocals, and grand, sweeping waves of melody that find an intersection of doom, spectral vaporousness, and cold-hearted cruelty. In its less overpowering passages, the combination of sounds, which seem to include horrifying bestial growls, as if the rending of flesh by a feeding leviathan, and cries of fear and pain, is horrifying.

The terrors of “Sleepless Slumber” are more than matched by the experience of 0N0′s second track, “Chambers of Oblivion“, which becomes a symphony of storming savagery and stunning catsatrophe. Gigantic booming grooves and blistering machine-gun-like snare fusillades create the atmosphere of an active war zone, while the wild screaming and howling vocals vent pure rage. The riffing and keyboard tones that surround these warlike and fast-changing rhythms, for their own part, become cyclonic in their intensity and unpredictability. Violence and blood-lusting lunacy become the order of the day.

But this song also changes, slowing into a crushing portrayal of catastrophic doom and then ascending into a display of tyrannical imperiousness, in which the music jackhammers with tremendous force, and the leads swirl and soar, almost in ecstasy over the destruction that’s being meted out on benighted souls. It’s very easy to lose yourself in this neck-wrecking episode — but still more changes lie head. The song rockets ahead in an increasingly unhinged display of unbridled chaos, a torrent of light-speeding drum blasting and delirious riffing, backed by grand fanfares that ring like portents of grim, implacable malignancy. The bursts of choral voices add to the sense that we’re witnessing the execution of a final, un-appealable judgment on all of humankind, one that will end it all.