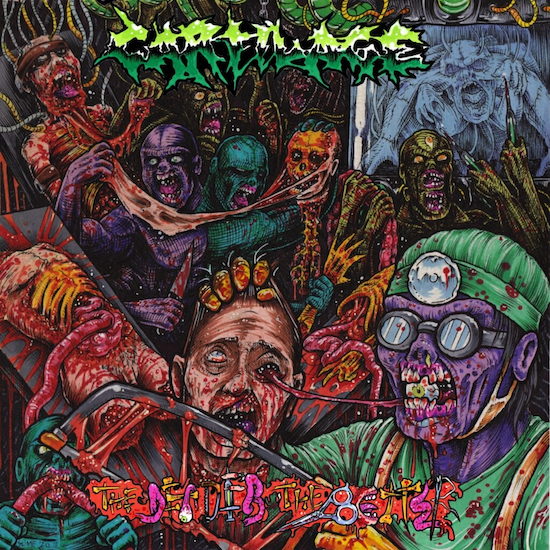 The album may not be what your psychotherapist would order, but they’re groping in the dark anyway, and they probably didn’t take any courses in fucked-ed up death/gore, more’s the pity. Maybe we should begin a letter-writing campaign to places that teach counseling and psychology/psychiatry? Yeah no, that’s the demon alcohol talking. 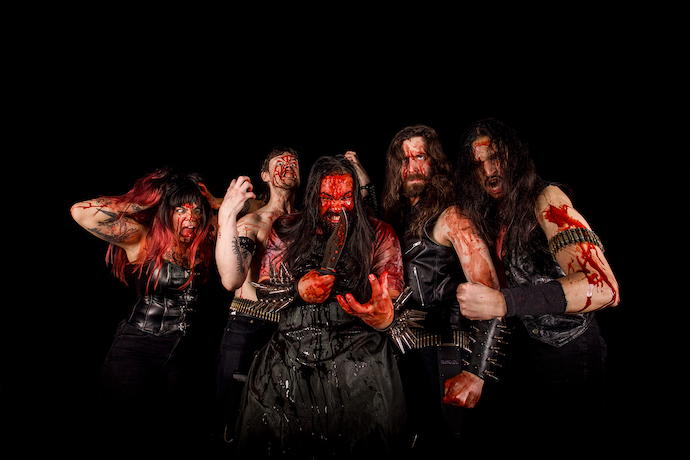 I’m going to write some more impressions about the album, which 99/9% of you will ignore, but let’s postpone that boredom and go straight to the recently released video for the album’s title track. If you’re a detail nerd, and goddamn aren’t all metalheads OCD detail nerds?, it features guests from Impaled, Ghoul, and more:

You know, you could watch and listen to that and get just about all the clues you need about the rest of the album. Clues like hard-slugging and fast-galloping riffs, skull-snapping drumwork, head-spinning tempo variations, screaming solos, vocals as foul as rotting meat, and a welcome sense that the band don’t take themselves too seriously

But here are some more clues: Cartilage also discharge songs that slash like serial killers, convulse in seizures, sear like an acetylene torch, maul like bulldozers, and lurch like zombies (the slow ones, not the fast ones), and as crazed and kaleidoscopic as the songs usually are, they’re cleverly embedded with hook-y melodies. and head-moving grooves.

On top of all that, Cartilage manage to make the tracks feel feral even though it quickly becomes evident (thanks to an even mix and clarity of sound) that all the instrumentalists have got lots of top-shelf technical chops (enough to make prog and tech-death bands jealous) and a sense of twisted adventurousness in the way they write songs. They probably have fiendish fun imagining how well the songs will repeatedly throw listeners off-balance.

Okay, I’ll shut the fuck up and let you press play, which most of you did about 10 minutes ago anyway (and no, I’m not surveilling you, just being a good judge of human nature). It’s about as much fun as you can have with your clothes on. But if you want  to strip down anyway, go ahead. I’m not looking.

MORE DETAILS: I’m too drunk now to do anything but copy/paste this shit, though I do think it’s important — because very few bands can honestly claim they did every goddamned thing themselves:

“The Deader The Better was recorded by Alejandro Corredor (Pounder, ex-Nausea) in January 2020 at Darker Corners Studio in San Luis Obispo. The album all at once features friends, peers, and gore metal grandmasters, with guest vocals by Matt Harvey (Exhumed, Gruesome) who also helped produce the album, Ross Sewage (Impaled, Exhumed), Sean McGrath (Impaled), guest vocals and guitar solo from Leon del Muerte (Murder Construct, Terrorizer LA), and a guest solo from Tom Draper (Pounder, ex-Carcass), sharpening CARTILAGE’s hemorrhaging stabs of grind for the masses. The Deader The Better is completed with cover art by Matt Slime, and includes a cover of Impetigo’s ‘Boneyard.'” 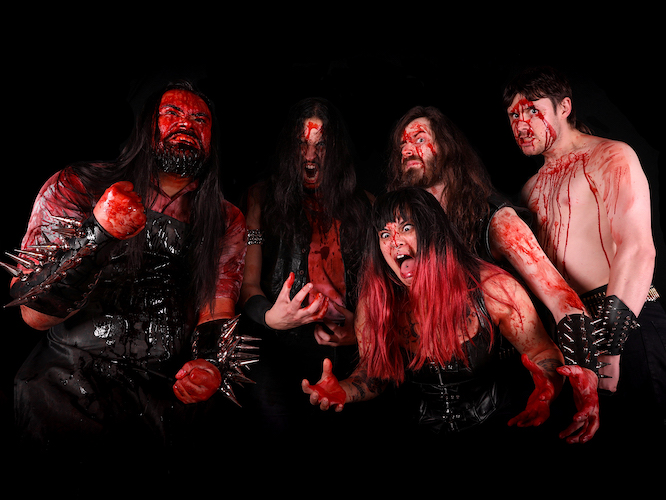 The album will be released by Creator-Destructor in a bunch of different formats – 200 vinyl on Doublemint/Purple Swirl, 200 vinyl on Bone w/ Blood Red Splatter, and 100 vinyl on Mustard w/ Magenta Splatter, as well as cassette and digital formats. If your stomach’s not already turning somersaults after listening to the music, those color descriptions for the vinyl will get that going.

The release date is Friday, May 13th, but you don’t have to remember that because if you’re a smart cookie you’ll just pre-order the fuckin’ thing right now. I’ve made that easy for you, I mean other than buying it for you myself, because I’m not that drunk.

P.S. Cartilage have announced a run of California shows, playing San Francisco, Long Beach, and Santa Cruz May 20th through 22nd. The band will also perform at Northwest Terror Fest in Seattle June 30th through July 2nd, joining Ludicra, Repulsion, Suffocation, Acephalix, Panopticon, and many others. We of course take special joy and pride in the Cartilege appearance at NWTF, because my friends and I here at NCS have had something to do with launching NWTF and keeping it going.