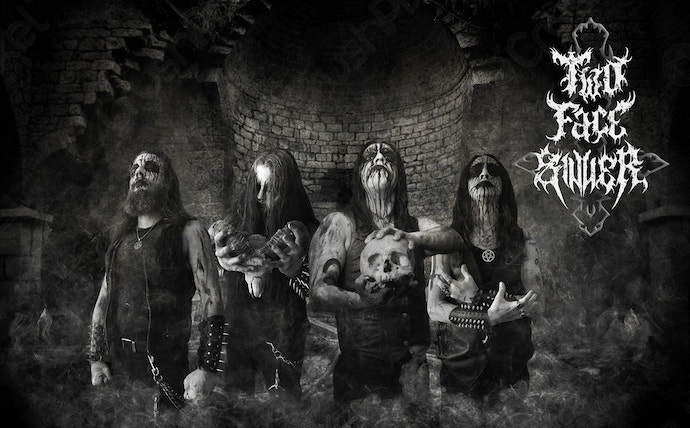 Two Face Sinner‘s most recent album, Spiritual Nemesis, was released in 2020 by Non Serviam Records (on CD and digitally). As a reminder of its diabolical allure, last fall we premiered a lyric video for the record’s second track, “Satanic Altar“. One good turn deserves another, and so today we’re presenting another lyric video, this one for “Servants of Blind Faith“ 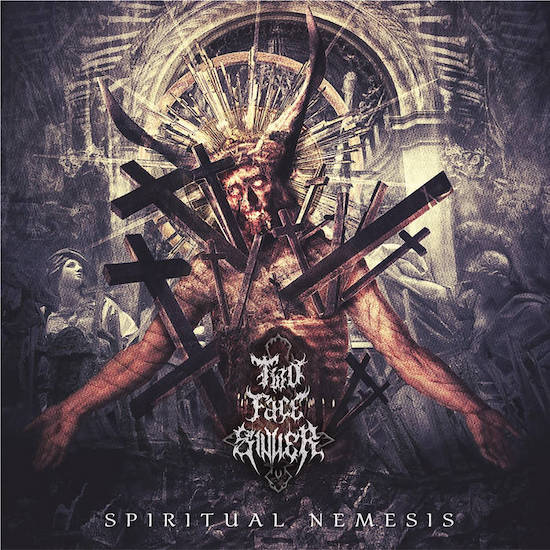 The disgusted words of the song, uttered in voracious growls, leave no doubt about the convictions of Two Face Sinner — that servants of the cross are fed by lies and fear, eaten up inside, and in their blind faith have become parasites upon humankind. The song fueled by those lyrics is itself a furious and intensely gripping piece, and one that gets firmly stuck in the head.

The music is so memorable in part because it’s built upon the repetition of a central riff and variations of it. But before it emerges the band create an arresting introduction with the siren-like wail of a guitar, grand but ominous chords, and explosive percussive detonations. When the riff comes, it transforms the music into a channel of derangement and fear, propelled by hyper-blasting and rapidly somersaulting drumwork and pulsating bass lines.

The rise and fall of the feverish melody and its variations causes it to burrow deeper, like the worms spoken of in the lyrics, but the band introduce ways of adding to its intensity near the end through the introduction of flickering and swirling keyboards and a magnetic guitar solo that makes the melodic through-line seem pleading, yearning, and distraught.

“Servants of Blind Faith” isn’t the only song on Spiritual Nemesis that;’s capable of putting your head in a hammer lock. That song whose lyric video we premiered last fall, “Satanic Altar“, is another. In its words, voiced by vicious inflamed snarls and abyssal spoken words, Two Face Sinner invite you to the altar of Satan, to bless yourself with blood and to embrace death. In the music, the sharp pop and clatter of the snare will light a fire under your pulse while the bass undulates like a serpent and the riffing creates a dense shroud of boiling sound that seems to channel both grim cruelty and fearsome reverence, both exaltation and despair.

As the riffing cycles over and again, it becomes an increasingly immersive and consuming experience, but eventually changes. A gripping guitar lead surfaces, creating a sensation of misery, which deepens as the drums briefly vanish, and then the song accelerates again, the piston-like snare hammering even faster. A sinuous melody slithers through the sonic storm, worming itself ever deeper into your head and propelling the song to a ravishing crescendo.

Much like these two songs, the whole album is easy to get hooked on, and it’s still available for purchase via the links below. We’ve also provided a stream of the band’s lyric video for “Invoking Evil” and a full stream of the entire album.