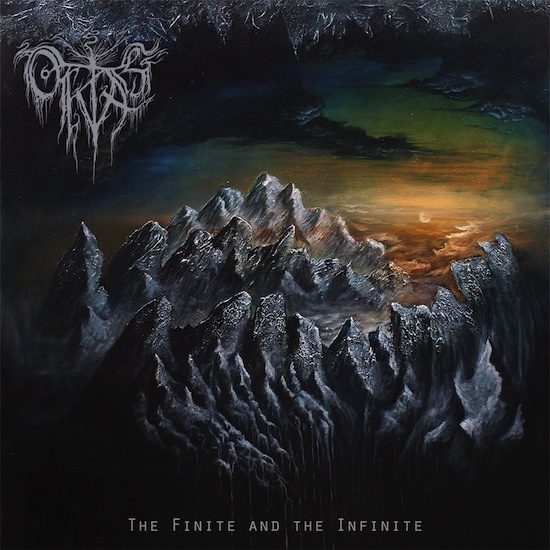 In September 2019 we had the great pleasure of premiering the debut EP of Philadelphia-based Oktas, a fascinating record about which we spilled a flood of words and attempted to sum up as one that embraced a wide range of influences, “from ambient minimalism to atmospheric black metal and epic doom metal (and maybe a bit of gloomy post-punk in the mix, too), woven together with a cinematic edge”.

Hundreds of books have already been written, and thousands more will be written, about what has happened to the world in just the two years and eight months since that EP was released, a time filled with traumatic upheavals, many of them unforeseen and others foreseen but blindly ignored. Certainly not the easiest time for the making of new music, among all the other traumas. But it’s good to see that this band persevered, as others have, and now they have a new album on the way and we have another premiere to support it. 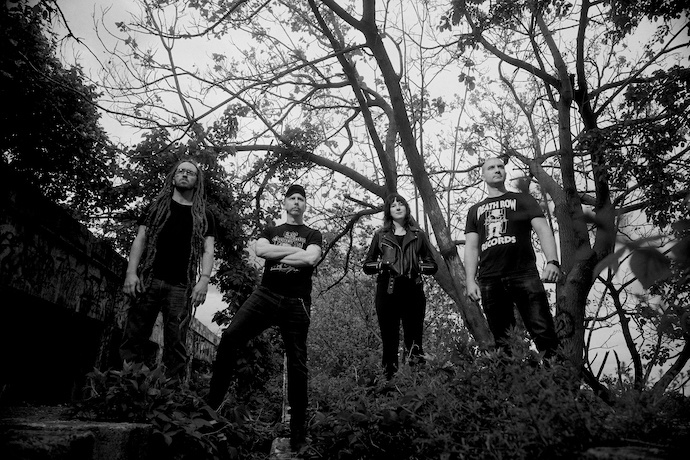 The new Oktas album is named The Finite and The Infinite. It again features the work of Bob Stokes (bass, vocals), Carl Whitlock (bass), and Ron Macauleyy (drums), but with cellist Jason Barren having moved to New Mexico the band found local cellist Agnes Kline to take his place. As Bob Stokes tells us, “We wrote this album with her during the lockdown. She brings a whole new level of depth and sorrow to our sound”.

And if you were paying attention, you now know that Oktas have persevered in the unusual choice of instrumentation that was also a feature of their debut EP: two bassists, a drummer, and a cellist — but no guitars. The first public sign of what they collectively achieved while enduring the pandemic is the song we’re premiering today, “Collateral Damage“.

“Crushing” is too mild a word for the way the song begins. The music heaves and stomps with shuddering power and crackles with disorienting distortion. A collage of searing and wailing tones cascade above those monstrous movements and becomes increasingly feverish, creating feelings of fear and despair.

You can imagine bones splintering and blood congealing, and the fear factor of the music magnifies with the advent of brutal growls and inflamed howls. The harmonized melody that flows and flickers through the sonic earthquakes and harrowing vocals is vibrant and mesmerizing, as are the snare-drum patterns. It sounds like a grasping for hope and a spark of resilience in a barren and oppressive land, and it burrows deep in the mind as it goes.

Suddenly the subterranean traumas vanish, making a brief space for acoustic bass and mournful cello strings to surface, and the music then towers and becomes vast. The cello is a striking presence as that immense dark monument rises, a soulful outpouring of sorrow that becomes increasingly immersive and spellbinding as the low end undulates and the drums infectiously snap.

It’s the kind of song where you may have to shake yourself at the end, just to remember where you are and what the world was like before becoming consumed by these immense and soul-shaking sounds.

You may know that Bob Stokes is a talented visual artist as well as a talented musician, and it’s his wonderfully immersive and haunting painting that appears on the cover of The Finite and The Infinite. The album was recorded by Steve Roche at Permanent Hearing Damage Studios and it was mastered by Alan Douches.