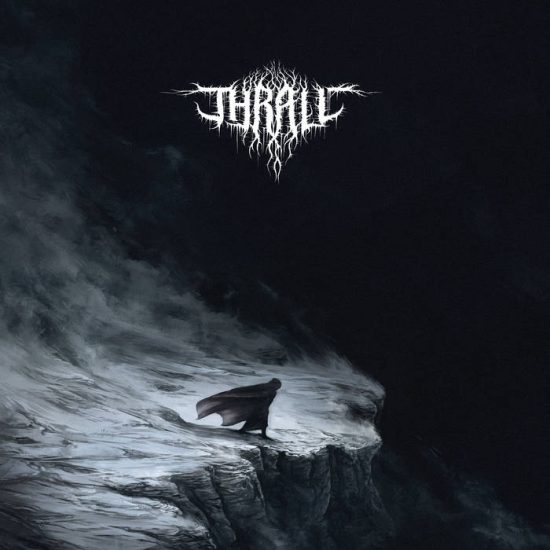 A dozen years have passed since the release of Thrall‘s debut album, Away From the Haunts of Men. Two more albums and an EP followed in relatively quick succession from this Australian band, but then came a near-seven-year interval that left a gap in new recordings, a gap that’s about to be filled in eye-opening fashion. The pandemic brought doom to millions, but renewed life to Thrall, and now their new album Schisms is ready for release.

The band’s founder Tøm Vøid has been its only steadfast member, with the recording line-up in constant flux from release to release. The new album features a big array of contributors around the founder, including current or former members of Gatecreeper, Noose Rot, Mar Mortuum, Myotragus, Cult of the Night, Ruins, and Dead River Runs Dry.

What has this collective accomplished on Schisms? There have been a couple of early clues via the release of the songs “Tyrant” and “Hollow”, but now’s the day when all will be revealed in full. 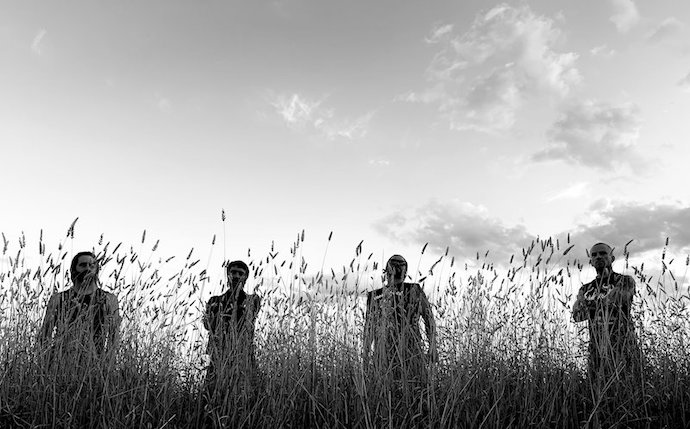 The advance press promises that on Schisms the band “play some primeval and heinous black metal with a ferocious thrash metal attack mixed with some raucous crust and a miserable doom atmosphere”, and that they bring post-metal ingredients into the mix as well. And that’s all true, but what’s missing from that genre menu is how all the ingredients work together, and the twisting and turning moods and experiences they so vividly create.

The most recently released of those songs mentioned above is “Hollow“. It burns from the beginning, with dense cruel tremolo’d riffage and thunderous drumming — but then repeatedly changes, becoming ebullient and bounding, hallucinatory and haunting, sinister and seductive, theatrical and throttling. The changes come suddenly, keeping the listeners perched on the edge of their seat and chained to the music.

The previously released advance track, “Tyrant“, is at least equally extravagant in its elaborate and macabre twists and turns, but maybe a bit more laden with hooks, especially as a result of one jittery recurring motif that you’ll notice as soon as you hear it, and a magnificent extended guitar solo deserving of a packed arena. The vocals are as frighteningly barbaric as before, and the drum and bass flurries just as likely to give you an adrenaline punch, but the song ends with the ring of eerie glistening tones.

However, when you take in the album’s other six songs (all of them continuing the format of one-word titles), you’ll realize that those first two don’t exhaust the ideas that found fiendish life in Schisms.

In the opening title track, for example, writhing riffs that sound dismal and demented are punctuated by jolting percussive bursts, and they lead into high searing melodies, obliterating drums, and scalding howls. But the song suddenly segues into ambling beats and momentous yet peculiar blaring chords. The music is simultaneously disturbing, disorienting, and magnificent, and further proof that Thrall have a knack for sticking hooks in their music, even if those hooks aren’t conventional ones.

“Tyrant” and “Hollow” follow it, with the blazing tirade of “Veils” lodged in between those two. “Veils” includes doses of primal slashing riffs and head-hooking beats, as well as a diabolically seductive interlude, to go along with bolting gallops and racing firestorms of sound.

Four more songs follow “Hollow”, and by then you’ll be expecting more sudden changes within the tracks, more melodic discordance, more turbulent upheavals, more hallucinatory digressions, more imperious vocal voracity — and you’ll get all that, because by then it will be evident that Thrall have a deviant, mercurial style of black metal that ventures at will outside the usual genre tropes, and a talent for discombobulating their listeners, while maintaining a thoroughly sinister atmosphere.

Yet there are some emotional through-lines in those remaining tracks despite how multi-faceted each of them is. And so “Nihil” is drenched in agony and despair before and after it explodes in violence; “Abyss” is a strange and sulphurous romp, equal parts hallucinogenic and hellish; and “Epoch” opens the mind’s eye to glorious infernal visions, primitive and carnal but also an experience of splendor (and it’s home to another fantastical guitar solo).

In “Dust” Thrall save their longest track for last, and they use the time well, making it the most multi-faceted of all the songs, and the one that perhaps best displays Thrall‘s ability to pull the listener through labyrinthian excursions and leave heads spinning as well as pumping them like pistons.

To sum up, Schisms is mind-bending as well as mauling, elaborate as well as feral, both strangely seductive and so frightening that it puts chills up and down the spine. With a clear and cutting sound and a balanced mix, it reveals all its fabulous moving parts for those who wish to inspect them, but just getting irresistibly carried away is the most likely outcome. Oh yes, it is indeed en-Thrall-ing.

Schisms will be released in multiple formats on May 28th, with vinyl editions on offer from Impure Sounds, cassette tapes from Brilliant Emperor, and digital editions available as well. You’ll find pre-order links below, and we’ll leave you here with the words of Tøm Vøid:

“Schisms is our fourth album. It is our most ambitious, varied, and accomplished work to date. It consolidates the themes and forms of our entire oeuvre and distills them. The ever-present melding of disparate genres continues in more cohesive and varied combinations. Black metal forged in the furnace of fear forms a chimera with doom, post rock and other genres.

“This album explores the existential horror of a world divided by schisms (ecological, spiritual, philosophical, political, national, geographical, historical, and so on). Whilst the lyrics have specific meaning to me, I’m not here to proselytise. Think critically and for yourself is a pivotal tenet for life in my opinion. The lyrics exist to evoke, not prescribe meaning, they are symbolic and thematic, not literal. I want listeners to bring their life experiences and interpretations to the songs in the hope they can remain somewhat universal.”