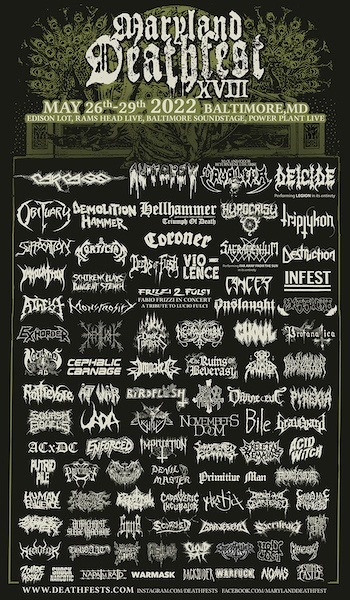 You may have noticed that yesterday we didn’t make any new postings at NCS. It’s not that we didn’t have anything to post, it’s because our editor (that would be me) just blundered through a lost morning and basically forgot about everything other than attempting to gear up for the first day of Maryland Deathfest 2022.

In part I blame the fact that DGR and I and four other Seattle friends were on some flights from hell that didn’t make it to Baltimore until 1:15 a.m. yesterday. We managed to drag our asses from bed in time to rendezvous for lunch with Andy Synn (whose flight from the UK got in at a more reasonable hour) and a crew of other MDF stalwarts that we usually hang out with.

I guess we were at lunch together for about 2 1/2 hours, which is actually about par for the course when this crew gets together, and maybe more than par because we haven’t gotten to do this for three fucking years. And who knows if we’ll ever get to do it again? For MDF, the future is cloudy. 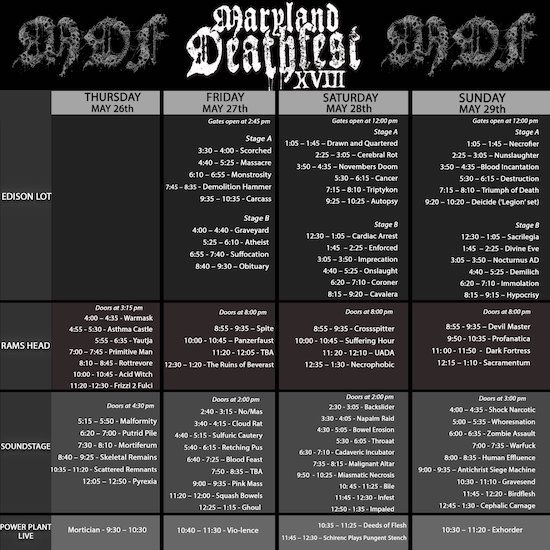 For the first afternoon and night of the fest, it’s clear we weren’t the only people treating this as a long-delayed reunion. I’d say there was a palpable sense of joy in all the crowds, which were just as large outside the venues as inside them. I myself spent as much time talking with folks outside Ram’s Head and Soundstage as I did listening to the music. Honestly, I only caught the sets of five bands — Asthma Castle, Primitive Man, Mortiferum, Mortician, and Acid Witch, and not even 100% of each of those — before I hit the wall and went back to the hotel.

But I’m really not feeling any pressure to do anything this year. No bucket lists to check off. No compulsion to see anyone on stage or take photos for future blog entries, or to write any blog entries about the event (for the first time ever). Just enjoying the company and going with the flow.

DGR and Andy aren’t feeling compelled to write either, although they did do some advance work in an effort to keep the site from going dark while we’re here. DGR in particular wrote something like a dozen reviews before we set off on our east-bound journey. Which is why I had plenty of content I could have posted yesterday. But my ass is a bit more in gear today, and so you’ll see two more of his reviews today, and some more over the weekend and on Monday (along with the latest edition of The Synn Report) as we begin the treks back home.

Today there will be more reunions, including a new rendezvous at Edison Lot during the afternoon and earlier part of the evening. Being outside at that giant parking lot will be a mixed bag today, because thunderstorms are forecast, and I just saw that Baltimore will be under a tornado watch today! Fuck me. Maybe a visit to The Land of Oz is in my future.

Okay, so there’s a report. Conceivably I’ll do another one at some point while we’re here in Baltimore, perhaps one delivered by balloon from Oz.