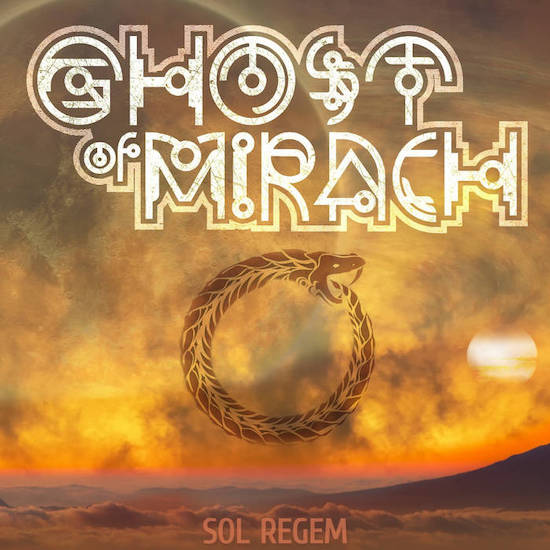 (This is DGR‘s review of the debut EP by the Dutch death metal band Ghost of Mirach, which was released in April 2022.)

Taken at face value Ghost Of Mirach‘s debut EP Sol Regem is a weird fucking entity. There is no groundwork laid and no explanation provided within the songs of what exactly is happening here. The group just launch you right into the deep end and from there you either pick up what’s happening or it whips right past you, given that Sol Regem is only twenty minutes long.

However, given this website’s tendencies to pull bands from nowhere and place them in front of you, at the very least we should explain what the hell the Ghost Of Mirach project is.

Ghost of Mirach is a new three-piece group formed out of the Netherlands whose members have quite the resume between them.

A lot of that is credit to drummer Michael Van Der Plicht, who has sat behind the kit for a wide swath of groups over his career but most recently has been drumming for the Satan-as-cosmos black metal of Aran Angmar and picking up live duties for Carach Angren. But, if you had told us that the project was just a union between members of Apophys – Kevin Quilligan being a driving force behind this band – and God Dethroned, then you’d likely have had us hooked from there.

Ghost Of Mirach is a science-fiction-themed symphonic death metal project whose first release is already shooting for the stars, so to speak. Here – as described by the band – are the events taking place within the group’s EP Sol Regem:

“Sol Regem tells the story of two timeless beings: HelËne and Sulien. They have lived for thousands of years in peace on a remote planet in a remote galaxy. As both Hel and Sulien are virtually eternal, they have reclused themselves into a continuation of a life together in peace, for both have seen every other aspect of existence a thousand times over.

But now theír way of living is under immediate threat by a Cosmic Serpent. Cosmic Serpents are among the rarest of godlike creatures. Many believe them to exist only in myth. Hel and Sulien are about to find out that this is a false belief, and it will change who they are forever.”

Given that we’re a site that has often cheered on Mechina‘s own sci-fi grandeur, though the twisted universes of bands like Zornheym and Ghost Of Atlantis were also fascinating in recent years, Ghost of Mirach may very well find a comfortable home here.

Sol Regem asks a lot of listener on first go-around. It is a twenty-minute EP that breaks up into three songs, and with only a band roster available to you and a description of what the overarching concept of the EP is, the opening of Sol Regem may not be what you’d expect.

“The Passing” is almost seven minutes long and starts out surprisingly slow, with Ghost Of Mirach attempting a bit of scene-setting before the events get underway. While it may be tempting to view this as a continuation of the tech-death whirlwind that was Apophys – three of the members from that band are present here – Ghost Of Mirach is an entirely different group, more interested in the symphonic backings and storytelling rather than blowing the listener away by dropping an asterioid’s worth of instruments on them. The commonly employed trope of the opening track effectively moving zero-to-one-hundred in the span of a second is not used here, so it can feel like “The Passing” is testing your patience a bit before things get underway at about two-and-a-half-minutes in. For a good chunk of its run time, “The Passing” is almost a piano-driven doom song.

The arsenal is fully deployed in the following two songs, “A Day Of Reckoning” and “Killing The Cosmic Serpent”. Now that the groundwork and scene-setting is out of the way, Ghost Of Mirach take the oppurtunity to propel things down a twisting path almost immediately.

“A Day Of Reckoning” features a central guest appearance from Mayan’s Marcela Bovio, who works her way into the spinning whirlwind of the song about halfway through as the story’s protagonist heads deeper into battle. It’s an abrupt turn form the initial forward assault that the song starts with, but just as quickly the band decide to get heavy again. Much of the melodic lifting is done by the backing orchestration, with the group at the forefront more than content to just smash things to bits, including one moment of soaring vocal work backed by the full blastbeat ensemble, because what else are you supposed to do during that time? Tone it down?

It’s fitting that “Killing The Cosmic Serpent” is the weighty epic of the EP. It’s the longest song and what the band have been building up to for the better part of fourteen minutes now. It’s also easily the heaviest song on here by traditional metrics. If you’ve been waiting for the big apocalyptic battle and cinematic release in music form that has been promised throughout Sol Regem, then “Killing The Cosmic Serpent” more than meets those needs within its first two minutes.

It’s where all of the instrumentation comes crashing to the ground and Kevin turns almost feral at times. If you want the bludgeoning double-bass pedal and barked vocal combo on full display then “Killing The Cosmic Serpent” is the song to go to. Hell, “Killing The Cosmic Serpent” might be the song for this particular EP, because even at over seven and a half minutes in length the group still pack the damned thing full of music to discover. Enough so that the time passes by incredibly fast with only one ambient bit to break things up. The last two minutes of the song are the music annihilation you seek.

Sol Regem has some growing pains to go through for sure. As a debut release it’s definitely one of those that is an expulsion of ideas, like a dam finally bursting so that things afterwords can emerge more easily. Its a little ‘proof of concept’ at times, but as a release with the heavy burden of scene setting, laying the groundwork, and making a statement of what sort of band this is, Sol Regem more than gets the job done.

There’s a lot of heavy lifting being done here but now that Ghost Of Mirach have one under their belts, they’ve got plenty of ideas to work with and expand upon for future releases – definitely in terms of stuff to refine on so that future releases can hit that much harder or be that much more expansive than before.

It’s always encouraging to see that the sort of sci-fi nerdy streak that lies within heavy metal remains at full strength and that releases like Sol Regem, records that want to create whole stories, paint whole scenes, create universes beyond just the aural bludgeoning that heavy metal is so good at, are always a joy to see.