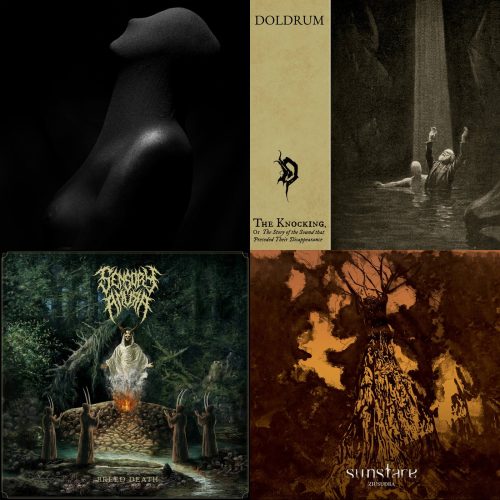 Boy howdy, did we ever miss a lot of stuff last month.

But, then, you could say that about every month really, as I’ve come to accept (after many, many years in denial) that it’s impossible for us (that’s the royal “us”) to catch and cover everything that’s released.

Accepting this fact, however, has definitely helped me to relax a little bit, as while I still feel a smidgen of guilt that I’m/we’re not covering more bands (or, at least, more underground bands, because, let’s face it, the big dogs don’t need our help or attention quite so much) I’m more at ease with the fact that whoever we do end up writing about will definitely/maybe/probably/hopefully benefit from it.

And, if worst comes to worst, there’s always my annual series of year-end round-ups to help bring attention to some of the more unsung artists and albums.

Speaking of… here are four albums from May that you might just have overlooked (but really shouldn’t).

Call it “Drone”, call it “Doom”, call it… whatever the hell you want, really, there’s no question that As I Cast Ruin… is one raw, gaping wound of an album, and certainly not one to recommend to anyone looking for an easy ride or an uplifting experience.

From start to finish this is grim, gloomy music designed to plumb the depths of despair and desperation, a record where even the “lightest” moments (“Accepting the Fate I’ve Crafted”, “A Shimmering View”, both of which possess faint, but poignant, similarities to the extremely underrated A Swarm of the Sun) are practically overflowing with hopeless melancholy.

And the, of course, there’s the humongously heavy, and utterly soul-crushing strains of songs like “Gaze into the Glow and Drift into Time” and absolutely harrowing, yet also morbidly haunting, Triptykon-esque title-track, whose blend of tolling, dark-matter-dense riffs and anguished, agonised vocals provides not even a moment of comfort or solace, and even those small snatches of relative calm where the band allow their listener a momentary reprieve only serve to tug and tear at your heartstrings even more.

Hell, even the most “conventional” material here – such as the almost Paradise Lost sounding “The Ashes of Everything I’ve Failed to Be” – still seems like it wants nothing more than to leave you a broken, weeping wreck of a human being once it’s done with you, to the point where I feel as though this album should almost come with a warning not to listen to it if you’re in any way of a fragile or depressive disposition.

But while it’s a hard, demanding album, As I Cast Ruin… is also, in many ways, a rewarding one too, as there’s no pretense, no calculation going on here – this is as honest, as real, and (again) as raw as it gets – and while it certainly won’t be for everyone, there’s no question it will touch some people very deeply indeed.

DOLDRUM – THE KNOCKING, OR THE STORY OF THE SOUND THAT PRECEDED THEIR DISAPPEARANCE

2022 has so far delivered a number of really good debut albums from bands just beginning to make their mark on the Black Metal scene – Te Ruki, Dissolve Patterns, Entgeist… plus Morkera, Swampborn, and several more that I’ve yet to write about or have yet to be released – but The Knocking… (no, I’m not writing out the full title every time) might just be the best of them.

The band’s creepy, cantankerous, and unapologetically caustic sound has frequently seen this album compared to Ved Buens Ende‘s seminal Written In Waters, and with good reason, as it clearly shares a similarly unorthodox and unconventional idea of what Black Metal is… and what it can be.

But my ears also detect some similarities to latter-day Nidingr – both in the gnarly, nerve-jangling riff work and the croaking, cracked-throat vocals – and possibly even a little bit of Voices… even if just in terms of the sinister, story-telling vibe of the music (as well as their penchant for wordy, evocative album titles).

And yet, while these touchstones might be a useful guide as to whether you’re going to like what you’re about to hear, they don’t really give a full picture of the band, whose music is more than capable of standing on its own.

Whether that’s in the form of the twisted twang and sinister swagger of “The Knocking”, the slithering, salacious bass-lines and edgy, off-kilter gallop of “The Visitor”, or the desperate howls and dervish-like blastbeats of “The Offering”, it’s clear that this terrible trio (The Terrific Don McKinnon, Jimmy Oh-My-Back Guitars, Rat Deveaux) are far greater than the mere sum of their parts.

What’s more there’s such a dense, oppressive sense of atmosphere permeating this album – you can practically feel the ominous, encroaching darkness, the shifting weight of stone and soil, the gasping, clawing desperation as the air grows thinner and thinner – that it’s almost like you’re right down there, in the depths, yourself, and it’s only once the climactic, claustrophobic strains of “The Disappearance” have finished that you’re finally going to be able to breathe again.

Truly one of the most dynamic, distinctive, and devious debuts of the year.

Some of you may remember that I was thoroughly impressed by Sensory Amusia‘s 2020 EP Bereavement, which I compared to a mix of Aborted, Dyscarnate, and Man Must Die at the time.

Well, somehow they’ve gotten even heavier in the short space of time between that release and their new album, Breed Death, and I’m here to tell you exactly why that’s a good thing!

Erring even closer to the Brutal/Technical Death Metal approach of bands like Suffocation and Dying Fetus, crushing cuts such as “Yersinia Pestis” and “Vulgar Thoughts of Carnage”, chug and churn, shred and slam, without mercy or restraint, with every subsequent song feeling like it’s attempting to outdo the previous one in just how much blunt force sonic trauma it can inflict on the listener.

But while the influence of the “elder gods” of Death Metal is certainly present, Sensory Amusia are no inbred throwback but instead employ a decidedly modern, yet no less monstrous, form of auditory annihilation which also draws on the heaviest end of the Tech Death spectrum and the nastiest parts of the Deathcore scene too.

Some of the twitchy, staccato riff work, for example, recalls the bleeding-edge best of Soreption (and, truth be told, I actually prefer this album to that band’s latest effort), while the gargantuan grooves and guttural vocals hooks of tracks like “Parasitic Alteration” and “Bind, Torture, Kill” owe a fair debt to early Whitechapel and/or latter-day Benighted.

There’s even – whisper it – a hint of pre-sell-out Slipknot to some of these riffs, which might turn some people off but which works really well to my ears and adds an extra dash of unpredictability to an album which doesn’t seem to care where it pulls influence and inspiration from… just as long as the end product is as nasty, nihilistic, and neck-wreckingly heavy as possible.

One of the things that I think puts a lot of people off so-called “Post-Metal” is that, due to its name, they basically just expect it to be aimless Post-Rock meandering with more distortion.

Sure, there’s a Hardcore-edge to the band’s music in places – mostly due to the throat-shredding, larynx-lacerating efforts of their vocalist – but for the most part Sunstare‘s sound is firmly rooted in the proggier end of the Sludge scene, drawing strong comparisons to Germany’s dearly-departed Planks as well as the band’s more “blackened” countrymen in Regarde Les Hommes Tomber (especially during “Uru (Wrath, Flood)”) and even – during their darkest, doomiest moments – soul-crushing US sludge-lords Dead To A Dying World.

Don’t believe me? Well, just give the album a listen and experience the creeping, crippling dread of the opening title-track, followed by the ugly, lurching riffs and savage, strangulated vocals of “Namlulu Di-Kud (The Sentence)” for yourselves, and then tell me I’m wrong. You won’t be able to do it.

There’s just such a real, and undeniable, sense of menace and malevolence underpinning tracks like “Abgal (The Very Wise)” and “Zi-Šag-Ĝal (Sauve-Vie)” that even the more overtly melodic moments of the former, and the ambient, atmospheric embellishments of the latter, practically bristle with latent hostility and barely repressed animosity.

As you may have gathered already, I am a little bit in love with this record, which truly doesn’t have any weak points, as far as I can tell. But it’s prowling penultimate number “Ganzer (The Abyss)” which is part Amenra, part Tom Waits, and part… something else… which convinced me that Sunstare were really onto something special here, after which the doom-laden, slow-burn denouement of “Awîlum (L’homme Libre)” simply served to reaffirm my belief that this is an album more people need to hear.

Hopefully you’ll be one of them.