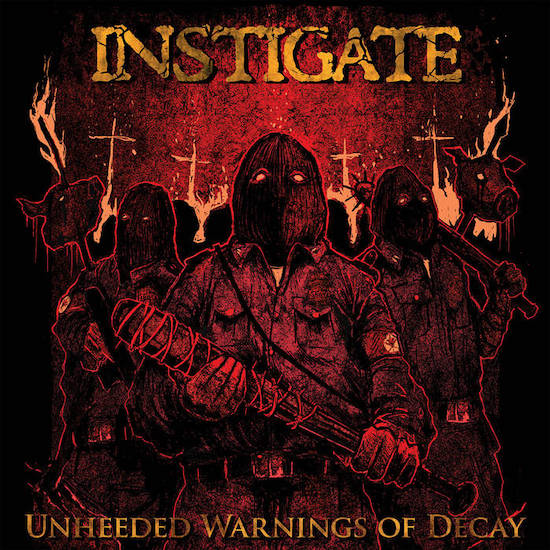 We are fast approaching a day we’ve been hoping would come — the June 24 release of a debut album by the Italian death metal band Instigate. Their first release, a 2020 EP named Echoes of A Dying World, elicited praise at our site from both myself (here) and Andy Synn (here), with comparative references being dropped to the likes of Misery Index, Suffocation, Dyscarnate, Hour of Penance, and Hideous Divinity. And we weren’t alone in our praise — that EP triggered lots of positive reactions across the metalverse.

So we’ve been both eager and curious to find out what Instigate might do on a first full-length. Now we’re getting our answers, and you’re getting them too, thanks to the debut of two singles already (“Witness of the End Times” and “Haruspex“) and a third one we’re bringing you today — “Indoctrinated Reborn” — which is paired with an electrifying video made by Maurizio del Piccolo (Movidel Production). 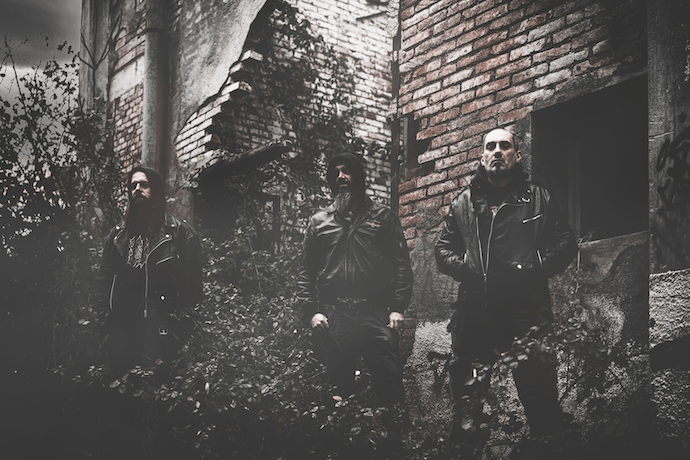 The core veteran trio of Instigate remained together for the new album — guitarist Stefano Rossi Ciucci (Bloodtruth, Vomit the Soul), bassist Riccardo Rogari (Bloodtruth), and vocalist Stefano Borciani (Demiurgon). Kevin Talley, who performed drums on that 2020 EP, is missing from the full-length, but Instigate recruited a new session drummer for the album who’s just as formidable — Francesco Paoli from Fleshgod Apocalypse. And Instigate again enlisted Stefano Morabito from 16th Cellar Studios in Rome for the engineering work.

The title of the album is Unheeded Warnings of Decay, and it’s being released by Everlasting Spew Records. Regarding the new song you’re about to hear, we share these words from the band:

“If Unheeded Warnings of Decay is a voyage into the birth-autodestruction cycle of civilization, the ‘Indoctrinated Reborn‘ single makes us witness the humanity collapse with men divided by dogmas, sacrificed to interests, and oppressed by absolutisms”.

Those themes are captured in the video, which creates a nightmarish metaphorical narrative, in addition to vividly capturing the intensity of the band’s performance.

As for the music, it pulls no punches, but instead delivers them in a full-throttle fury. Francesco Paoli delivers his punishment in spine-tingling fashion, with a fast-changing sequence of hammer blows, bullet-spitting blasts, thunderous double-kicks, and acrobatic fills. Stefano Borciani vents his rage (which you can see unmistakably in his face) through explosive growls and unchained screams.

Not to be outdone, Riccardo Rogari uses his bass as a gut-slugging, spine-jarring weapon. For his part, guitarist Stefano Rossi Ciucci packs the songs with riffs that slash and swarm, grind and growl, and eject punk-like chords that give the music a primal, feral quality to go along with all the rampant viciousness.

On top of all that, the song’s melodic through-lines channel a changing array of dark and dangerous moods. The music sears in its expression of violent insanity, becomes grim and grinding in its portrait of cold-hearted cruelty, and includes eerie soaring tones that are chilling and unearthly.

In a nutshell, the song is a bone-breaker, a pulse-pounder, and a frightening mind-mangler, and another great sign of just how good this album is.

On June 24th Everlasting Spew will release the album on CD, cassette tape, and digital formats, and a vinyl edition will be available later in 2022. Check out the links below, and also be sure to listen to those two previously released tracks, “Witness of the End Times” and “Haruspex“.