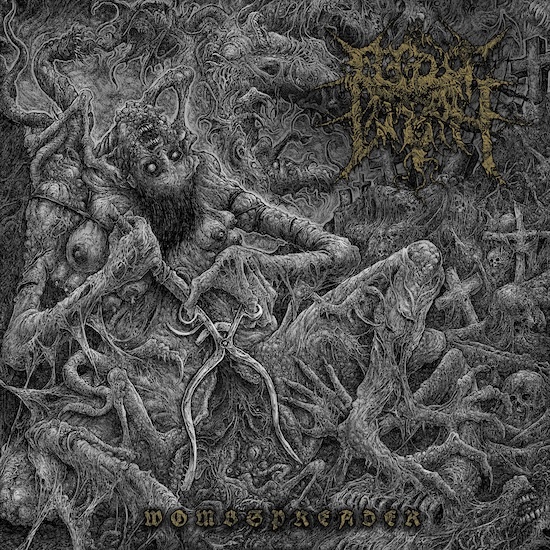 The new album by Eggs of Gomorrh is lyrically devoted to a general disgust for humanity (or at least the Christ-worshiping segments of it) and to blasphemous occult visions of sadistic punishment and merciless retribution — scenes of mutilation, degradation, inhuman monstrosity, ruinous violence, and sexual perversion, all of it frothing in oceans of blood and semen. They revel in the foul riot of their words, and the music within Wombspreader is a fucking riot too, carrying the band to new heights of terrorizing excess.

But this should come as no surprise. Over the course of their 2016 debut album (Rot Prophet), a 2019 EP (Outpregnate), and a 2019 split with the Turkish blasphemers Sarinvomit (Encomium of Depraved Instincts), these Swiss fiends have already established a reputation for delivering astonishingly savage forms of jet-speed sonic annihilation with impressive technical skill — and slipping in some grooves and eerie melody in the midst of their slaughtering tirades.

As you’ll discover from our premiere of their forthcoming second album on the Godz Ov War label, all these qualities are again explosively displayed 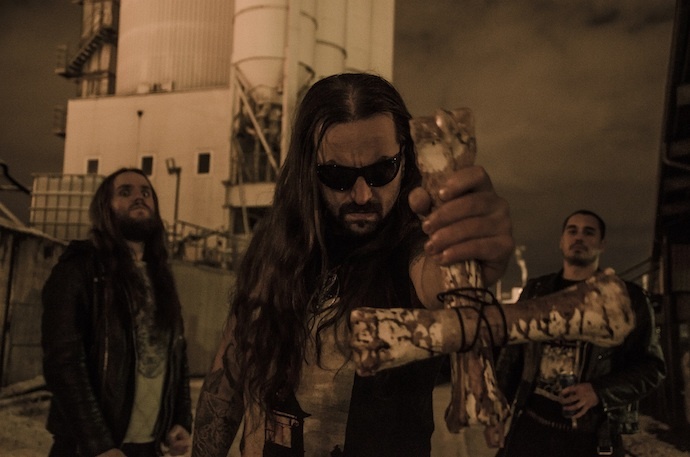 Wombspreader cuts its swath of black/death destruction across 10 tracks and nearly 36 minutes. The hallmarks of the songs are extreme speed and maniacal execution. The drumming is thoroughly off-the-hook; the guitars, armed with both corrosive and searing tone, are almost relentlessly berserk; the undulating bass tones fly just as fast; the screaming and roaring vocals are unhinged. In a nutshell, everyone sounds like they’re in the throes of violent possession.

On the other hand, it must be quickly said that although the overarching impact is one of chaos, the songs are packed with sudden stops and starts and other abrupt twists which further underscore the band’s technical skill. While moving at the pace of rockets, the drum patterns and tempos change repeatedly and sharply, and so does the riffing. In other words, the songs are dazzling and even bewildering, as well as cyclonically destructive.

Eggs of Gomorrh also spice the songs with flurries of high-flying guitar-leads and solos that gloriously spiral out of the mayhem, as well as soaring chords, which together give the music sensations of otherworldly ecstasy and imperious splendor. The songs aren’t short on muscle-twitching grooves either.

There are few chances for catching your breath in the midst of this exhilarating spectacle, even when slower stomping cadences and blaring bursts of melody trade off with the rampant sonic seizures. The fifth track, “Då Svartdöd Nalkas”, an electronic composition by Stigma Yuga, seems intended as a breath-catching interlude, but it’s frighteningly ominous, and so any breaths will be uneasy ones. After that, the strafing runs begin again in full fury.

Sometimes metal addicts need a gigantic jolt of adrenaline, and when it comes with such crazed fury and such head-spinning execution as you’ll find on Wombspreader, it’s even more welcome. Prepare to lose your minds: