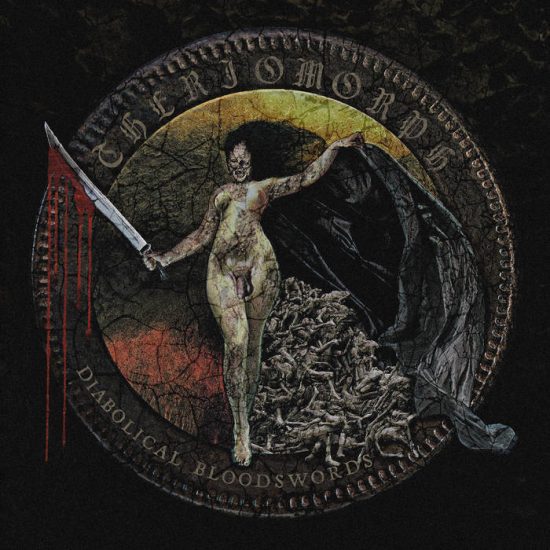 This weekly column is two days removed from its usual Sunday spot. I had picked the music and was all ready to begin writing on Sunday morning, and then remembered I had agreed to do a premiere that day and then go on an excursion with my wife. And then there was a neighborhood picnic I’d also forgotten about, which went on into the night. Monday brought a different set of obstacles. So, we’re two days late.

Anyway, what I’ve picked for this Shades of Black column is a mix of one advance track and three complete records, including an EP that’s 3 1/2 years old but just hit my radar recently (and shorted it out).

Theriomorph is a solo project of P.E. Packain (aka Vainaya), best known for his solo work in the now-defunct Cornigr and as a key instrumental performer and songwriter in Adaestuo. Earlier this year I frothed at the mouth about a preview track from Theriomorph‘s debut album Diabolical Bloodswords, and last Friday it emerged in full bloom (via Terratur Possessions). 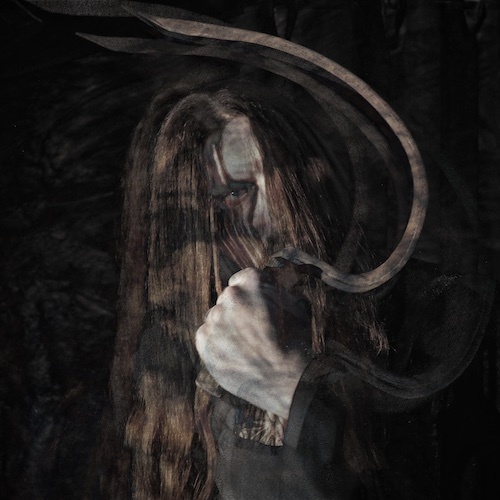 What caused the album to stand out for me are the striking ways in which it combines sounds and sensations. The drumming and cymbal work are thrills to hear, because they get your heart rushing without depending on blast-beats. The racing bass is noticeable and vital as well, and the rhythm section has an organic, “garage band” sound rather than a mechanized one. (Seriously, the turbocharged athleticism and variability in the drumwork are persistently jaw-dropping.)

The high whine and whir of the riffing, on the other hand, sound eerie and unnatural, and that effect is also vital to the album’s evil atmosphere, while the crazed yells that dominate in the vocal department, and which sometimes shift channels like a mad dialogue, are expulsions of unhinged fury and derangement

This melding of sounds makes the music compelling at a visceral level, waking up the reptile part of your brain, but also creates unearthly terrors. Depending on where you are in the album, the dense, abrasive riffing sounds poisonous and brazen, dismal and despairing, cruel and crazed. At all times, the music seems authentically nocturnal and occult, scary and yet magical.

The album also benefits from “Burning Black Bleeding”, which eventually snuffs out the riffing and makes room for haunting and hallowed singing as a mid-point break in the action. The mainly mid-paced “Lunar Emblem – Sign of Night”, which features muttered words instead of rabid howls, provides a different kind of break. It’s deeply chilling, and does indeed sound like a midnight ritual among witches and warlocks beneath a full moon.

As one final bit of praise, the intro and outro tracks, which are quite different from each other, make for wonderful bookends, starkly different in their sounds from what comes between them but entirely in keeping with the album’s overarching nightside atmosphere of frightening dread, diabolical possession, and of vengeful wraiths set loose upon the land. 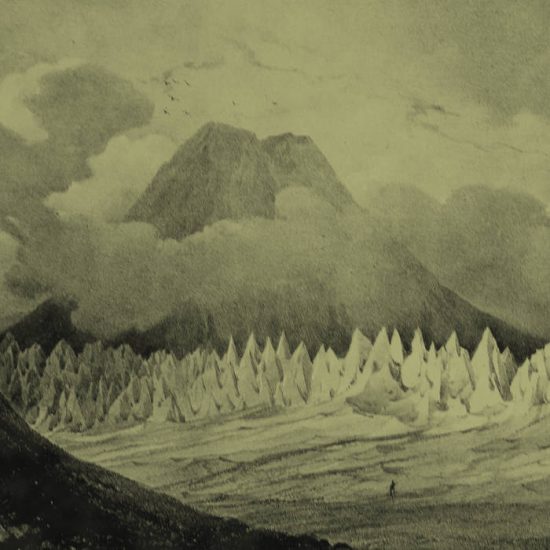 Now we come to that that EP that’s 3 1/2 years old. It hit my radar screen (and shorted it out) because of a link passed to me just a few days ago by my friend Miloš. It was released by a band named Marghöfða dýrið, a project of Tómas Ísdal, well-known for his work in the Icelandic bands Misþyrming, Carpe Noctem, and Naðra, aided here by drummer K and violinist A.

That band name refers to the “multiheaded beast used in a 17th-century curse lamenting the coming of the antichrist”, or so Mr. Isdal tells us. The labels that released the EP further advise: “The lyrics twist and mock the legacy of Protestant Christianity in Iceland from its hostile takeover of Catholic heresy in Skálholt during the middle of the 16th century into the godless, impure age of modernity”.

This EP, entitled Djöfladýrkun undir jökli (“Devilworship under the Glacier”), was the band’s debut release, and so far there hasn’t been a follow-up. It presents a single track of nearly 21 minutes in length, but you won’t be laboriously counting the minutes as you listen. To the contrary, it’s easy to get completely carried away by it.

The drums thunder, boom, and clatter, providing an often manic drive-train beneath dense swaths of deleterious riffage, shining leads that swirl and dart in transfixing ways, and shattering snarls and screams. For a track of such length you would expect (correctly) that it presents alterations in pacing as well as changing moods, which range from oppressively dismal to wildly ecstatic, from sorrowful and introspective to awe-struck.

The instrumentation changes as well, with strummed acoustic guitars and soulful violin melodies providing a digression. Eventually The violin also becomes the lead instrument in a long central section, creating a sense of vast sweep and gripping distress, paired with rhythms that match those changes in intensity, stately and head-nodding but also increasingly riotous. The soul-spearing impact of those flowing melodies are enhanced by a layering of the violin performances to create heart-breaking harmonies.

The lead-guitar melodies are equally emotive and attention-grabbing, and the refrain of an extended solo that’s soaring and yet melancholy is a highlight of the song’s back half. What comes after that is an expansive, panoramic experience that reaches epic heights of tragic grandeur. The song seems to end, but it’s just a brief pause before a finale in which the guitar rings like hopeful chimes but the violin spills out its grief one last time.

(I owe enormous thanks to my friend Miloš for linking me to this marvel.) 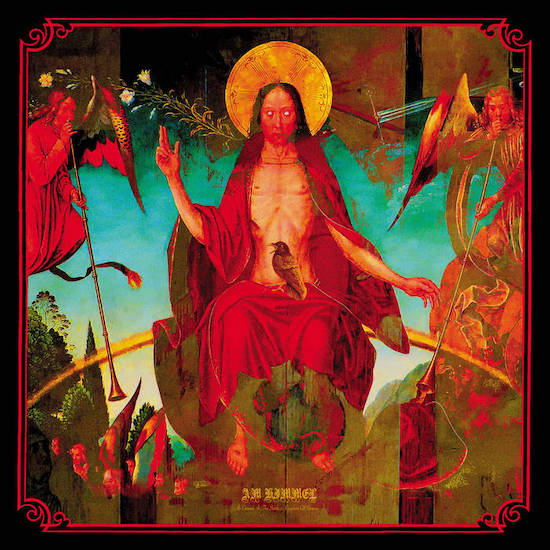 The next song is fantastically named “The Fumes Of Thy Preposterous Torment“. It’s part of an album by a band whose music is described this way at Bandcamp: “Am Himmel is an ecclesiastical nightmare formed by emanations from the metaphysical voids trapped in the eternal light. A starless kingdom bereft of celestial pureness. Strange rituals in the gothic catacombs of christianity and insanity’.

Am Himmel have a German name (which translates as “In the Sky”) but are in fact a Dutch band, with a single creator (JMKP). A press release describes the album as one that “channels ancient and metaphysical energies through the combination of droning, eerie soundscapes with raw and buzzing black metal…. There’s a sinister and unearthly atmosphere surrounding the whole record, not just from the devilish growls and shrieks but also from the hypnotic mystical synth layers”.

Those descriptions ring true in the case of this first advance track. It features the high shimmer and sparkle of eerie but beguiling tones as well as dense, heaving and undulating heaviness in the low end, which together make for a bracing juxtaposition. A steady snare beat beat that anchors the repeating cycle of these grand but frightening swaths of sound, and hideous echoing screams increase the music’s fear factor.

The song becomes an experience in terrifying splendor, and also manages to become spellbinding even as its intensity swells.

The name of the forthcoming Am Himmel album is As Eternal As The Starless Kingdom Of Sorrow. It’s set for release on June 30th by the Dutch label Burning World Records. You can listen to a second song, “The Patience and Silence of a Saint’s Death”, at Decibel, who premiered it last week. 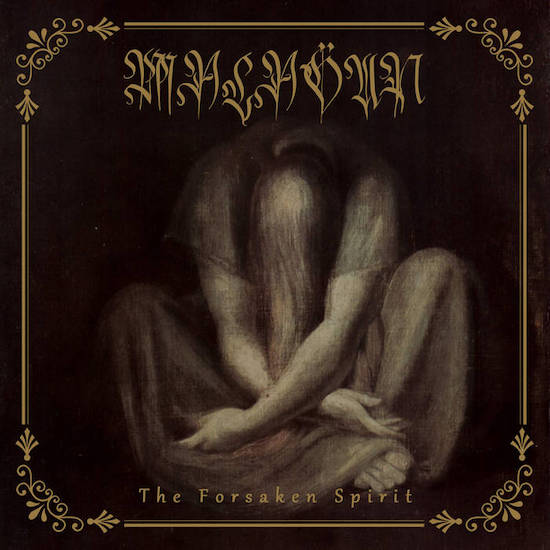 To close this week’s Shades of Black, I chose another complete album just released last Friday. This one, The Forsaken Spirit, is the second full-length to arrive from the Malaysian project Malaöun, whose sole member is also the man behind Devourer of Light, Impious Blood, and Voidnaga, and also a member of Thorns of Hate.

I reviewed Malaöun‘s 2020 debut album The Darkest Shrines in another one of these columns (here) and noted that it was described as a “one shot project”, and thus might have been both the first and the last Malaöun recording. We’re unexpectedly fortunate to have another one.

As on the debut album, Malaöun has brought us four longer-than-average tracks, which seem to explore themes of suffering and searching. The first track, “The Eternal Haze”, uses a martial drum pattern, grim and grievous chords, and sweeping synths to fashion its opening, and then the percussive fusillades and scalding screams begin, seeming to echo from within catacombs. The synths continue to give the music a feeling of towering but tormented magnificence.

When the hurtling pace subsides, the music moans and crawls in agony, punctuated by a thudding bass punch and exacerbated by those harrowing screams. When the drum riot resumes and the music again scales up, the feelings of emotional torture and pain intensify again.

The remaining tracks don’t offer much reprieve from the indigo moods, but they don’t all sound exactly the same. The synths regularly take flight, and the shrieks are always frightening in their intensity, but the glorious ringing riff that opens “Forsaken Embers” displays a dark post-punk influence, and the song also features throbbing bass lines that make a mark.

On the other hand, there’s a dreamlike and deeply forlorn and haunting quality in the extravagant cascades of sound that fill “White As Spirit, The Shadow of Agony”, while “Virtue of Your Suffering” blazes like a bonfire, defiant, savage, and even heroically epic, even though the shadow of defeat still seems to loom around the struggle.

That final song also transforms into a kind of march with a skipping rhythm, and tension builds, like the trepidation before a conflict in which the odds are stacked against you. The music ignites again in a blaze of barbarity, giving the album a heart-pounding finale.