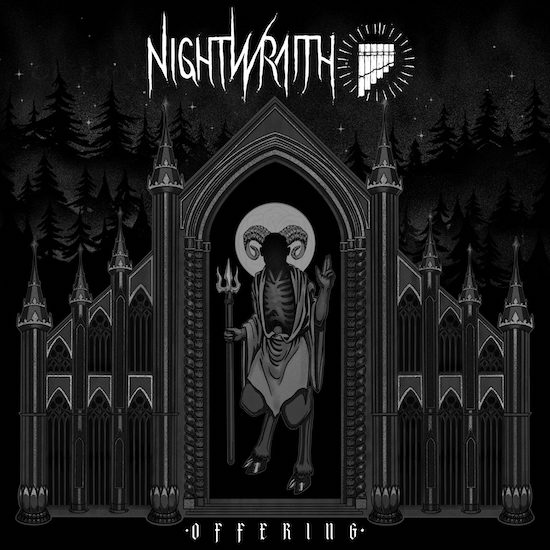 Almost three months ago Reaping Scythe Records released a new album by the Denver-based metal collective NightWraith. Entitled Offering, it was one of those albums that threw down the gauntlet to people interested in simple genre descriptors. With changes reflected not only from song to song but within each song, the band made use of ingredients from melodic death metal, black metal, and doom, but pulled from an even more eclectic array of time-traveling influences than even those.

As the band’s extravagantly bearded founder Benjamin Pitts put it: “It’s like we took all the heavy parts from bands like Carcass and Enslaved and combined it with the warmth of classic bands like Thin Lizzy and Blue Oyster Cult. It has been really fun inserting rock guitar and organ tones into a genre that typically avoids these types of sounds.”

And really, even those contrasting references just hint at how many facets Offering displays as it turns. As a reminder of that, today we’re bringing you the premiere of a live video of the band performing one of the thoroughly captivating tracks from Offering, a song appropriately named “Beguiler“. 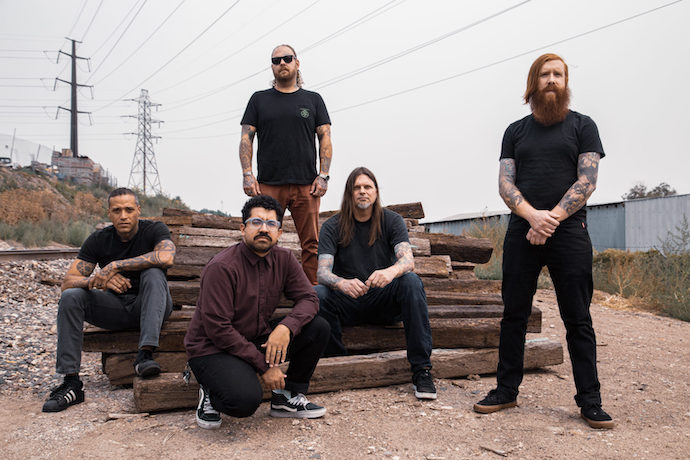 The ringing guitar and keyboard instrumental that opens the song is magically inviting, but only one feature of a richly tapestried piece that moves through many moods and musical variations. As the song ebbs and flows, twists and turns, it crosses through shade and sun, traversing the gloom of sorrow, seething with tension, and spinning the mind with extended guitar jams that dart and dance, slither and swirl, and become trippy, bluesy, and occult.

While all that happens, the rhythm section are putting on their own show. The bass hums and pulses, meanders and invigorates, and the drumming ranges from neck-snapping back-beats to open-handed blasts, with plenty of electrifying fills in the spaces between. Variations mark the vocals as well, which veer from rasping blackened snarls to guttural growls.

The video, filmed from multiple angles, gives a good view of all the moving human parts behind all the moving musical parts. Looks like this was a great show.

Well, we’ve given you our impressions, but we’ve also got a detailed view of the song’s movements and inspirations, and its live setting, from Ben Pitts:

“I’m thrilled that we were able to make this video for ‘Beguiler‘ because we love the song and wanted to capture a proper live presentation of it. Additionally, the footage was taken from the album release show for Offering, so there is great energy.

“‘Beguiler‘ has many components that flow together in an impactful way. It begins with harmonized clean guitars and shoots right into the chorus, which has been described as an ‘evil Beatles’ sounding progression. The verses are a bit heavier and are reminiscent of a ‘Dethklok-esque’ gallop. The bridge contains one of our favorite sections to play, which is an ascending diminished riff that resolves with some neo-classical harmonies. Finally, the song closes with a heavy version of the intro which has a symphonic quality to it and is perfect headbanging material!

“I’m really glad we were able to present some live content because it contains a certain energy which can be difficult to capture on record. For example, our drummer used to play to a click during live shows but eventually realized that being locked to a tempo can be constraining. We began to trust our internal meters and noticed that our live sound improved because we could fluctuate the tempo, giving the songs a more natural feel.”

“This footage was taken on 3/18/2022 at the Hi-Dive in Denver, CO by DunFurFun productions. Also have to give a shout-out to Kim Baxter for the live mix and James Freeman for capturing the room sound.”

Offering was tracked at The Shadow Temple, engineered, mixed, and produced by Jacob St. Amand and mastered by Pete deBoer at World Famous Studios. The record comes cloaked in the cover art of Jerianne Fulton and includes guest vocals by Grant Netzorg of In The Company Of Serpents on the track, “The Snake And The Rope.”

The album is still available from Reaping Scythe on on CD, vinyl, cassette, and digital formats, and you can explore those options via the links below. We’ve also included a full stream of the record, along with the band’s previously released video for the opening song “Hedonic Adaptation”.

One Response to “AN NCS VIDEO PREMIERE: NIGHTWRAITH — “BEGUILER””