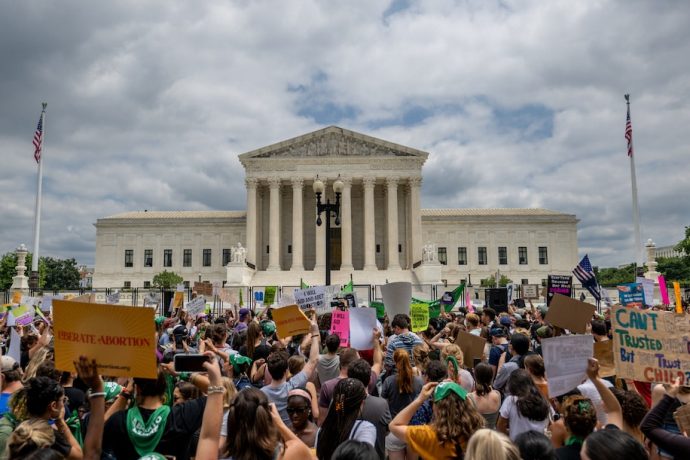 Off and on all day, every day, I read the news of the world. Every day I come across reports that make me feel varying mixtures of sorrow, disgust, anger, and frustration (because there’s not a damned thing I can do about any of it). A person concerned for their mental health would get a clue and stop doing this. Why I continue, I don’t know.

Most days I still forge ahead with what I do for NCS without uttering a syllable about the news that happens to be upsetting me; I know that no one comes here to see me whine. But sometimes what happens in the outer world is so bad that it becomes very difficult for me to concentrate on music, so bad that music barely seems relevant, or no longer functions very well as an escape, much less a treatment for my mental turmoil. This is one of those days.

You can probably guess what happened that so severely fucked up my head, especially if you live in the U.S.: The most powerful court in the land reversed a nearly 50-year-old precedent that had recognized the constitutional right of women (in limited circumstances) to make their own decisions about whether to carry a pregnancy to term. A newly constituted right-wing majority on the Supreme Court, appointed by a small group of U.S. Presidents who never won a popular majority vote themselves (including a seditious fraud who attempted to hold onto power in the equivalent of a coup), has now erased that right as if it never existed.

This abominable decision was a raw exercise of political power, a radical revision propelled by a theocratic cabal that got that power in part by making misleading or downright false statements to U.S. Senators (who confirmed their appointments) about their respect for Roe v Wade as established precedent. As one opinion writer put it this morning, referring not only to the justices but also to the people responsible for putting them in the position to act, “This is a story about men gaining power by trading away something that meant little to them compared with their own stature: the rights of women.”

Based on a legal analysis that limits rights under the Constitution’s 14th Amendment to what was “rooted in history and tradition” in 1868, when the Amendment was passed and when women didn’t even have the right to vote, the decision again makes women second-class citizens, without control over even their own bodies. As the dissenters wrote, “After today, young women will come of age with fewer rights than their mothers and grandmothers had.”

This second-class status is viscerally real, not merely symbolic: About half the states in the United States have either already enacted or soon will enact laws that restrict or make abortion illegal in all or most cases. To quote another opinion piece from this morning:

Many women may be forced by law to carry pregnancies to term, even, in some cases, those caused by rape or incest. Some will likely die, especially those with pregnancy complications that must be treated with abortion or those who resort to unsafe means of abortion because they can’t afford to travel to states where the procedure remains legal. Even those who are able to travel to other states could face the risk of criminal prosecution. Some could go to prison, as could the doctors who care for them. Miscarriages could be investigated as murders, which has already happened in several states, and may become only more common. Without full control over their bodies, women will lose their ability to function as equal members of American society.

The march backward won’t stop here. Despite the hollow assurances given by a few members of the right-wing majority, the reasoning of the Court’s majority opinion equally calls into question other constitutional rights that Americans have enjoyed based on earlier Supreme Court decisions, in some instances for decades, including the right to use birth control, the right to marry the person of their choosing, and the right of consenting adults to do as they please in the privacy of their bedrooms without being arrested and charged with crimes. The intent to un-do all those precedents, in addition to Roe v. Wade, was made explicit in a concurring opinion by possibly the most vile member of the current Supreme Court, Clarence Thomas.

I suppose there might be some people out there reading this now who’ve been rejoicing over this turn of events. For me it feels like a raw wound, and I’m not even a woman. To pour salt in the wound, there’s not a goddamned thing that can be done about it any time soon.

Proposals to pack the Supreme Court or establish term limits for the justices will never pass the U.S. Congress, which is in the strangle-hold of a minority party (and a couple of “center-right” Democrats) with the power to stop any legislation they don’t like, at least for the foreseeable future. Any effort to pass a nationwide federal law protecting abortion is equally doomed. So will be any efforts in “the red states” to liberalize severely restrictive anti-abortion laws that are already on the books.

Some day there might be enough people who exercise their right to vote in local, state, and national elections to change this wretched state of affairs. Maybe mass protests of a continuing nature would make that day come sooner rather than later. But given the anti-democratic features of our governmental system on the federal level, including the one state, one vote, make-up of the U.S. Senate, the gerrymandered electoral district lines that entrench positions in the U.S. House of Representatives, the Electoral College, and the filibuster rule, coupled with the enduring power of money over people in this country and the depth of embedded delusions that have been so methodically and effectively spread by far-right propaganda machines, I think it may take a generation for that day to come.

In the meantime, the future looks increasingly hellish, and the country I live in has suddenly become even more balkanized, with the recognition of what should be fundamental rights now entirely dependent on where we live, in a “red” or “blue” enclave. We have already been living in a land roiled by culture wars and divided by the politics of hate. This decision pours gasoline on those fires.

I guess I should add that in my case this wound feels particularly raw because it comes on top of a continuing regression in this country across an expanding spectrum of cultural, legal, and political issues. I’ve been alive for longer than most people reading this. I lived through the announcement of Roe v. Wade and the changes it wrought over the next nearly 50 years, as well as the recognition of many other civil rights and their embrace by large majorities of people in the U.S. over that same period. I thought I lived in an age of progress. I never dreamed that at this stage of my life I would see so vividly how fragile the progress was, and become witness to its reversal on such a scale.

For all these reason I have a particularly hard time focusing on metal today. For these reasons, I thought something should be said at NCS. I didn’t take a poll, but I’m pretty sure that in these sentiments I speak for all of us here.

I’m sure that between today and tomorrow I’ll shake myself like a wet dog and clear my head enough to get back to doing what people come here for. I have a gigantic list of new songs and videos. They won’t go anywhere, even though I’ll be able to highlight fewer of them than if I’d gotten my shit together today. Probably, I’ll also go to them later today as therapy, hunting for the ones that provide the catharsis for fury.

21 Responses to “A WRETCHED PAUSE”